By the virtue of all these false identities presented as authentic Team University council members, we conclude that this poster is fake.

• The Independent Electoral and Boundaries Commission (IEBC) rules require anyone running for President, Deputy President, Governor and Deputy Governor to possess a degree recognised in Kenya. 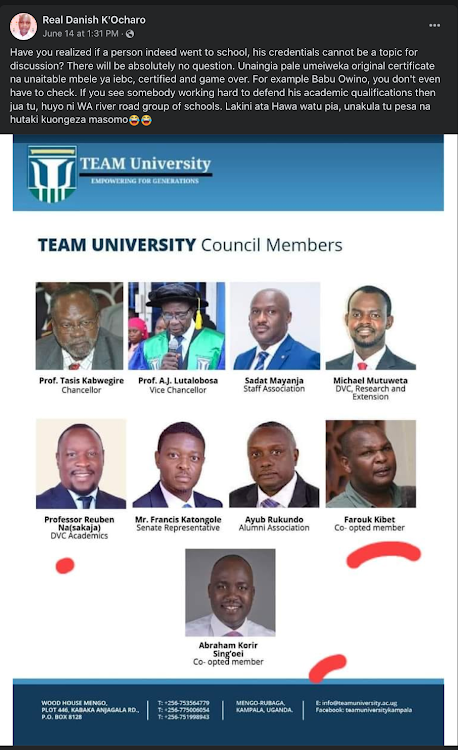 Among the people listed is Professor Reuben Na(sakaja), whose title at the Uganda-based university is the DVC Academics.

To confirm the authenticity of the alleged council members, we searched using keywords “Team University Council Members” on the institution’s website, but nothing appeared. We also used the same keywords on Google, but could not find such a list.

However, there are several things that are amiss in the poster. First, is the name of the institution’s chancellor. In articles published by Ugandan publications Daily Monitor and Independent, the Team University Chancellor’s name is Prof Tarsis Kabwegyere and not Prof Tasis Kabwegire, as indicated in the poster.

We did not find Michael Mutuweta, Ayub Rukundo and Reuben Na(sakaja) as staff members of the university. Equally, a search of the names Sadat Mayanja and Francis Katongole led us to images of different people. We ran a reverse image search of the photos placed together with those names to ascertain their true identities.

Using the same research tool on the image under Michael Mutuweta led us to a LinkedIn profile of Brian Tahinduka, a senior manager Logistics and Infrastructure — Natural Resources at Standard Bank Group in South Africa.

A reverse image search of the image under the name Reuben Na(sakaja) leads to the profile of Joseph Fetaa, head of Products and Channels at Orient Bank Uganda.

We also performed a reverse search of the image under the name Francis Katongole and discovered that the photo shows Albert Byaruhanga, a Business Banking director at Absa Bank Uganda.

By the virtue of all these false identities presented as authentic Team University council members, we conclude that this poster is fake.

Our calls and emails to Team University were unanswered. However, we came across a list of the Senior management on the Team University website. The list names Prof A.J. Lutalo-Bosa as the institution’s Vice Chancellor, Ellen Kinuge as the Dean of Students, Ssebandeke Yakoub is the Academic Registrar, and F.X. Tebandeke is the University Librarian.

Team University has been a subject in the Kenyan media after Nairobi Senator Johnson Sakaja presented a Bachelor of Science in Management degree certificate from the institution for clearance by the electoral commission.

The validity of Sakaja’s degree has been in question and as of 30 June 2022, the Commission for University Education revoked Sakaja’s degree, after it failed to find proof either from the institution or from the Nairobi Senator that indeed he graduated from Team University.

The Independent Electoral and Boundaries Commission (IEBC) rules require anyone running for President, Deputy President, Governor and Deputy Governor to possess a degree recognised in Kenya.

PesaCheck has looked into a poster on social media claiming to show Team University council members and finds it to be FAKE.