According to an eyewitness, the governor’s campaign vehicle veered off the road and hit a bodaboda.

•According to an eyewitness, the governor’s campaign vehicle veered off the road at the Free area along the Nairobi-Nakuru highway and hit a bodaboda.

•Philis Kaikai was among the first responders at the scene of the accident. 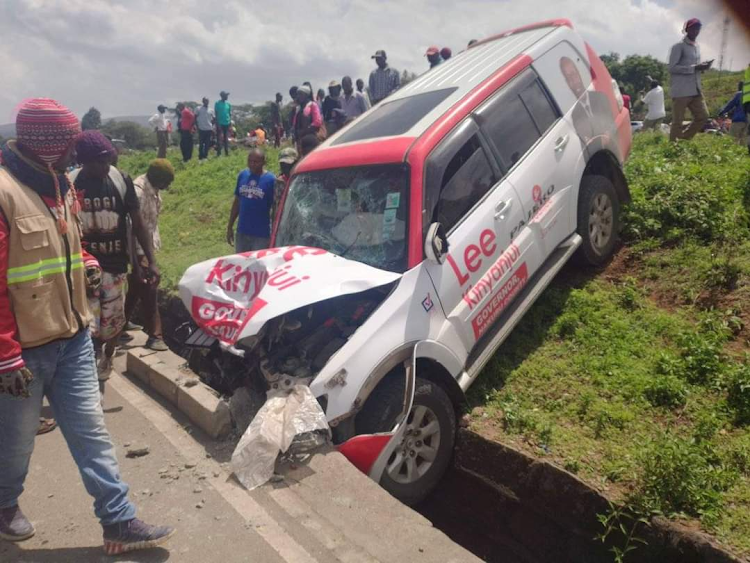 Two people have died after a vehicle belonging to Nakuru governor Lee Kinyanjui's campaign team lost control and hit a bodaboda rider and his pillion passenger.

According to an eyewitness, the governor’s campaign vehicle veered off the road at the Free area along the Nairobi-Nakuru highway and hit the motorbike.

Philis Kaikai was among the first responders at the scene of the accident.

Kaikai says she heard a loud bang and ran to the scene where they found the car in a ditch and two young men lying lifeless on the roadside.

“We heard a loud bang just outside our gate and we came out to see what was happening. We found the car in the ditch with a female occupant and two lifeless bodies on the roadside. The police arrived shortly and removed her from the vehicle unconscious,” Kaikai said.

The accident happened at around 11 am and claimed the lives of two young men who died on the spot.

In a statement through his Facebook page, Governor Lee Kinyanjui has sent a condolence message to the families of the departed.

“We regret to announce that at around 11 am in the morning, a vehicle belonging to one of our team members was involved in a road accident in Free area, Nakuru. She was alone in the vehicle at the time of the accident,” the post read.

“Our heartfelt condolences to the families of the departed, we take this opportunity to urge all road users to exercise caution on our roads.”

The bus was carrying mourners from Kisii and was heading to Naivasha.
News
1 month ago

Patient dies while undergoing treatment at Naivasha sub-county hospital.
News
1 month ago
WATCH: The latest videos from the Star
by JAMES MUNYUA
Fact Checker
23 May 2022 - 19:26