Kenyans asked to ignore a notice that is being spread on social media.

• The Fact-Checker has established the notice  is fake, and the motive behind it is to target unsuspecting Kenyans who are looking for jobs with the aim of conning them. 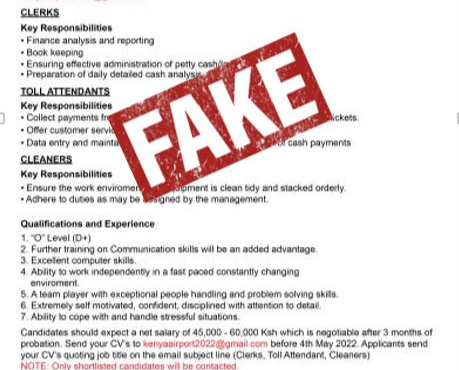 Kenya Airways has distanced itself from the advertisement being spread on the social media purporting that it was hiring toll attendants, clerks, as well as cleaners.

A notice, which has been termed fake, interested individuals had been asked to submit their applications for various roles in the airline.

According to the fake notice, Kenya Airways was looking to employ three clerks, six toll attendants, and four cleaners.

“We wish to fill the above positions of clerks and cleaners which have risen between Kenya Airport Authority and Nairobi Expressway in cooperation with China Road and Bridge Corporation,” read the fake notice.

The notice had further highlighted that candidates should expect a net salary ranging from Sh45,000-60,000 which is negotiable.

“Due to an urgent need of professional trainees we request applicants to send their CVs to [email protected] before May 4, 2022,” read the further the fake notice."

The Fact-Checker has established the notice  is fake, and the motive behind it is to target unsuspecting Kenyans who are looking for jobs with the aim of conning them.

Also , terming the advert notice as fake, Kenya Airways urged members not to be conned stating that all KQ vacancies are posted on their official channel.

“It has come to our attention that there is a FAKE advertisement associating Kenya Airways with supposed job opportunities offered by various organisations. Please note that all KQ vacancies are posted on our official LinkedIn channel. DO NOT BE CONNED,” read the post.