'Babu Owino's attack' on Jalang'o for being Ruto's mole fake

Babu Owino has also flagged the post as fake. 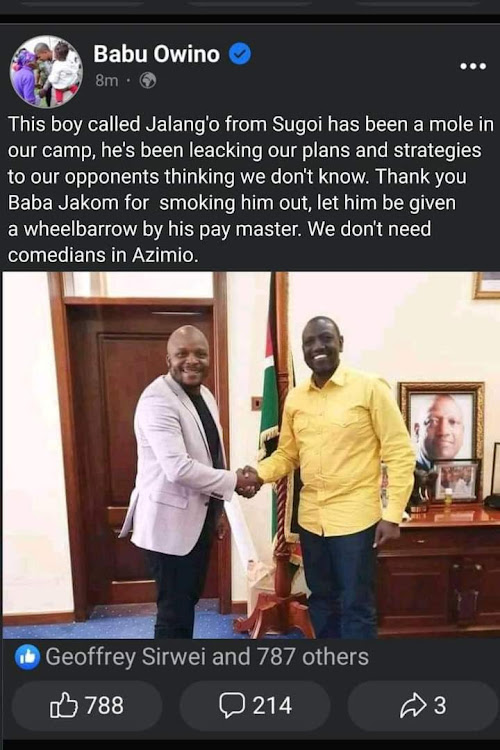 Lang'ata MP aspirant Felix Odiwuor, alias Jalas, was the topic of discussion on social media on Saturday following reports that he had been locked out of the ODM nominations.

According to the images being circulated on social media, the comedian-cum-radio presenter had been accused of being deputy president William Ruto's mole in the ODM party.

In the reports, an image of a Facebook page bearing the name of Embakasi East MP Babu Owino and a verification tick began going viral on social media.

The image indicated the MP attacked Jalang'o accusing him of being Ruto's insider in the ODM party.

"This boy called Jalango has been a mole in our camp, he's been leaking our plans and strategies to our opponents thinking we do not know," the captions on the photo claimed.

The alleged post is missing from the MP's verified Facebook page, a clear indicator that it was manipulated for propaganda purposes.

Also, the MP has come out to dismiss the image terming it as fake.

"This is pettiness. FAKE," Babu Owino captioned the image on Facebook.

Further, the fact-checker has found out that the image being circulated is old. It was taken during an interview between Jalas and the DP in 2021.

According to Jalas, no one has been locked out of the primaries and he will be in the race to the end.

One can visit the page to verify information claimed to have originated from him.

Jalang'o said his opponents have sensed defeat and have opted for propaganda.
News
4 months ago
“WATCH: The latest videos from the Star”
by KEVIN CHERUIYOT Online Journalist
Fact Checker
09 April 2022 - 17:27