The post being circulated is therefore fake and the MP has flagged it as such.

• The post being circulated is therefore fake and the MP has flagged it as such.

• Barasa is one of the DP’s die-hards and has been accompanying him in several events. 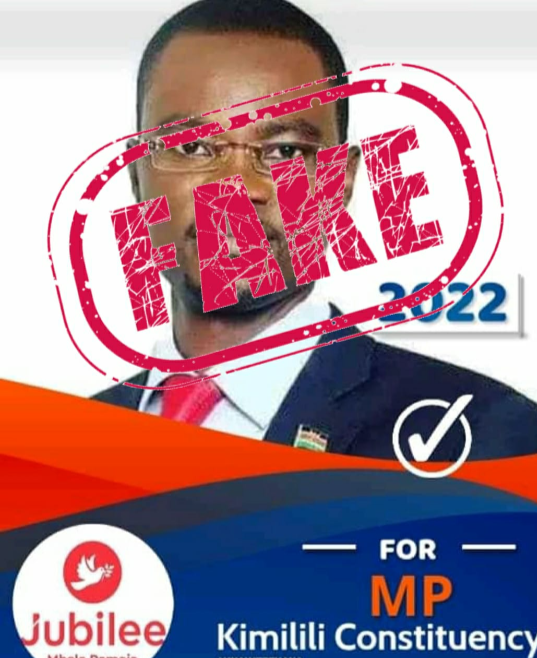 Information being circulated on social media claiming that Kimilili MP Didmus Barasa will defend his seat come August 9, under the Jubilee Party is not true.

The post being circulated is fake and the MP has flagged it as such.

This is one of the propaganda that is being spread as the election approaches.

On Monday, Barasa also accompanied the DP to the Bomas of Kenya, where the Safina Party was having its NDC, an indicator that he is still loyal to UDA.

Also, the MP has not been seen at the Jubilee party headquarters just as other aspirants who have ditched other parties for it lately.

Some of the giant parties including ODM, UDA, Jubilee, and others have been active on their social media updating Kenyans about their daily activities.

Therefore, the post is fake, and Kenyans have been asked to ignore it.

Barasa won his first term in office in the 2017 elections under the ruling Jubilee Party, being one of the few MPS who managed to win on the party's ticket in a region that largely voted for the opposition leader Raila Odinga then.

However, after the election, the MP has been a close ally of Deputy President William Ruto.

After the 2018 handshake between President Uhuru Kenyatta and Raila, the DP and his allies expressed their scepticism over the move.

When they could no longer take what they called disrespect from the Jubilee Party, the DP and his allies moved out in search of a new home.

They settled in the United Democratic Alliance party, where they will defend their various seats under.

Barasa is one of the DP’s die-hards and has been accompanying him in several events.

The post being circulated is therefore fake and the MP has flagged it as such.
News
2 months ago

• The government flagged the post as fake, asking people to ignore it. • According to the fact-checker, the fake statement has a lot of errors, and ...
News
2 months ago
WATCH: The latest videos from the Star
by KEVIN CHERUIYOT Online Journalist
Fact Checker
21 March 2022 - 21:57