A section of social media users have been saying Itumbi is faking his injury.

• A section of social media users have been saying Itumbi is faking his injury.

• Itumbi, who is Deputy President William Ruto's digital strategist was allegedly abducted in December last year while leaving a barbershop. 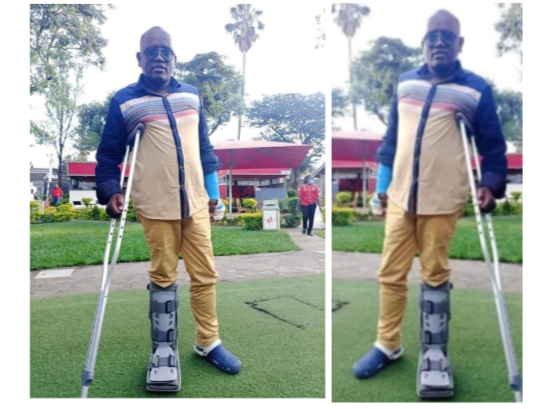 The image on the right side shows blogger Dennis Itumbi using a crutch to support his right injured leg while the other on the left side has been doctored.
Image: COURTESY

Controversial blogger Dennis Itumbi has left Kenyans talking on social media on exactly which of his legs was injured after his alleged abduction and torture in December last year.

This comes after a section of social media users shared an alleged image of the blogger with a plaster cast on the left leg.

A section of social media users has emerged with claims that Itumbi could be faking an injury on his leg.

“Ever since the abduction, it looks like Dennis Itumbi wakes up each day with a different broken leg. In other words, the injury switches from one leg to the other like a light switch. Is Itumbi shooting a movie or what? What is exactly happening here?”

A fact-check by the Star has established that the image showing Itumbi injured on the left leg is fake.

The right image shows Itumbi leaning on a medical crutch to support his right injured leg which is still on a plaster cast according to the photo.

Also, Google Reverse Image Search, TinEye, and Yandex tools did not pick the photos alleged to be of Itumbi injured on the left leg, a clear indication that the images were doctored.

Itumbi, who is Deputy President William Ruto's digital strategist, was reported missing in December last year after he was picked by three men while on his way out of a barbershop in the Thindigua area, Kiambu county.

A search operation was launched by his close allies who were unable to relocate him.

The blogger was on the same day found in Lucky Summer area, Kasarani, Nairobi, with his allies saying he was dumped there by his captors.

Itumbi claimed he was tortured before being abandoned by the kidnappers who left him with broken joints in the leg and hands.

The blogger was later admitted to the hospital where he was treated and discharged to recuperate at home.

At the time when he was being discharged, both legs were bandaged but after some time, Itumbi started making movements with his left foot.

He is yet to fully recover from the injuries he sustained and his right leg is still in a plaster cast.