Four policemen killed in yet another Lamu ambush

The 9.30am attack happened as the officers returned from Mpeketoni after an escort from Gamba

• The militants are believed to have also attacked the police landcruiser using a rocket propelled grenade or an improvised explosive device. 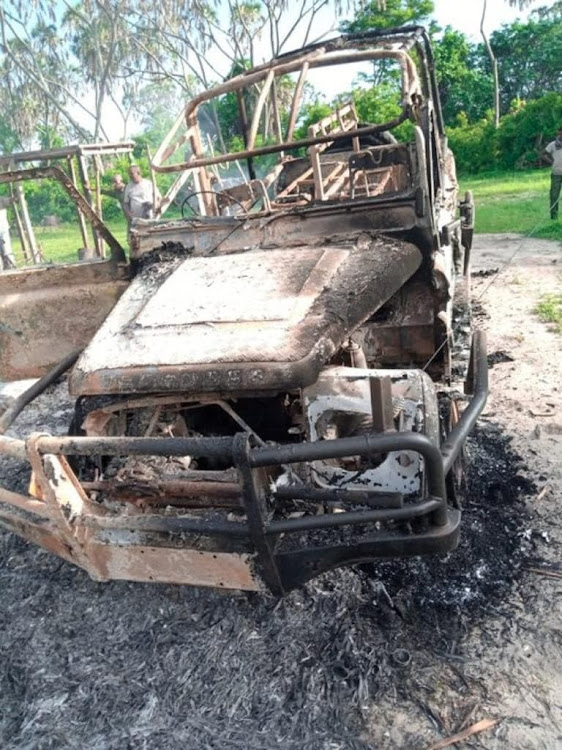 TERROR ATTACK: A police vehicle that was burnt after an attack at Milihoi, Lamu county on Friday, January 7.
Image: HANDOUT

At least four police officers were killed on Friday when a vehicle they were travelling in was attacked by gunmen in Milihoi, Lamu.

The attack happened at around 9.30am as the officers were returning from Mpeketoni after escorting vehicles from Gamba.

"The vehicle GKB 629Y came under bandits attack and all the four officers on board were fatally shot," a report made at Hindi police station shows.

The officers also fought back at the attackers, a number of whom are believed to have escaped with injuries.

The militants are believed to have also attacked the police landcruiser using a rocket propelled grenade or an improvised explosive device.

It is the same area where former PS Mariam Elmawy was attacked and killed in 2018.

“Can't be sure about al Shabab militants but police vehicles that had finished their escort duties came under attack early morning.

"The multi-agency security team there has responded quickly and the situation is normalising. No civilian has suffered any calamity,” Coast regional coordinator John Elungata said.

A contingent of officers responded to the scene and reported seeing bloodstains into the nearby forest amid a hunt for the attackers.

The area is among those under the dusk-to-dawn curfew imposed by the state on Wednesday. Thats why the attackers targeted the officers at daytime.

The National Security Council met for the first time this year to discuss attacks in parts of Lamu county.

The attacks have left 11 people including the officers dead.

The council which met under the chairmanship of President Uhuru Kenyatta on Wednesday later issued a number of orders to be implemented as part of efforts to address the new insecurity threats.

Among them was the 30-day dusk-to-dawn curfew. Interior Cabinet Secretary Fred Matiang’i also declared four divisions in the disturbed areas.

“Incidents of criminal attacks that have led to the loss of seven innocent lives have been reported in Widhu, Majembeni location of Lamu.

“The attacks have also occasioned the destruction of private property and unsettled residents in the affected and surrounding areas,” the CS said.

In Mpeketoni division the affected places include Bomani, Pongwe, Mpeketoni, Bahari and Mapenya.

In Lamu Central, Hindi division’s Hindi location will be affected.

“Residents in the disturbed areas are requested to cooperate with the security agencies and share information on suspicious persons and activities,” Matiangi said.

At least 15 suspects have been arrested over the attacks. More security was also deployed to trace other suspects in the latest attacks.

A team of detectives has been sent as back up to help in the operation.

The government has declared a 30-day dusk-to-dawn curfew on parts of Lamu.
News
4 months ago

The prosecution says it needs 30 days to complete the investigations and fill up charge sheet.
News
4 months ago
by CYRUS OMBATI AND CHETI PRAXIDES
Corridors of Power
07 January 2022 - 23:00