Raila: How I plan to revive industries 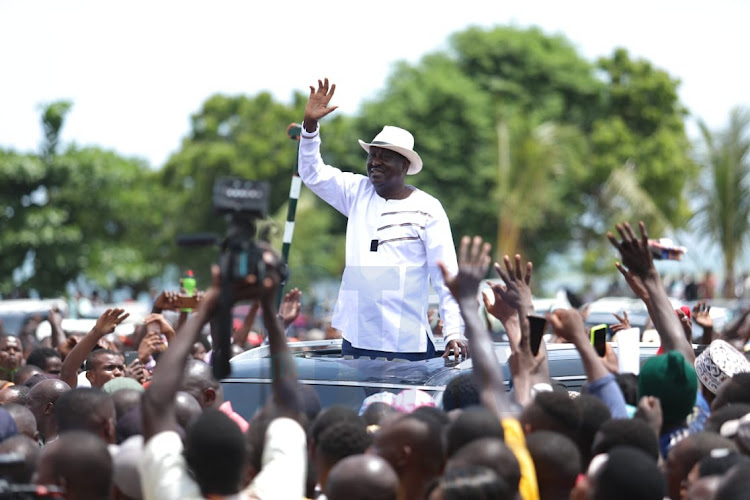 ODM leader Raila Odinga has for the third time taken Kenyans into his industrialisation agenda, believed to be his economic transformation blueprint if elected president.

Raila, who has been giving Kenyans a sneak peek of his manifesto, said industrialisation remains critical in restoring the country’s economy which he noted has over-depended on imports.

He said Kenya’s ability to manufacture most of the essential commodities lies in the radical shift that will see a mix of skills and knowledge inculcated in the local youths.

He noted that empowering the youthful population with basic skills to become technicians, tailors, cooks, hair dressers, artisans and craftsmen holds the potential of turning the country’s economic fortunes.

“I have some ideas on how we can have many ‘Made in Kenya’ products in supermarket shelves and shops in a sustained manner that ensures home grown industrialisation,” he said.

Raila has proposed the creation a human resource agency to scout and nurture raw talent and align the unique abilities with nation industrial goals.

The agency will identify skilled youths, organise and coordinate skills competitions, pick top talent, arrange training camps and send Kenya's best to compete with others from around the world in what he described as Skills Olympics.

“Identifying skilled youth needs to be done the same way we select athletes and footballers to Olympics and other international competitions,” he said.

SMEs run by craftsmen and artisans will be backed so passions become professions, industries and jobs.

“The body will source incentives for existing industries to extend rewards and scholarships to those with technical skills who want to continue perfecting. The body will establish a tradition of apprenticeship to help skilled youth keep updating their skills,” he said.

Raila faulted the government for doing little in identifying the passions of the youths and converting the same into livelihoods.

“In the recent years, the Ministry of Education has made some good strides in promoting skills. But there is little or no effort to channel those skills once students leave school, ” he said.

He called for recreation and mainstreaming of vocational high schools and a mind shift on the perception of skilled manual workers.

“More importantly, we need a concerted campaign against the societal mind-set that takes a dim view of skilled manual workers. We need a massive campaign on how our society has traditionally defined success, what we, the parents expect of our children, and what we as individuals expect of ourselves.”

Raila’s proposals are seen as response to Deputy President William Ruto’s bottom-up economic model that he has consistently trashed as promoting the handout culture.

The DP who has been spearheading the bottom-up economic model has welcomed the ODM boss to the 'Hustler nation', saying Raila’s economic plans dovetail with the hustler narrative.

“My friend Tinga, welcome to the Hustler movement. The conversation here is about the economy, not ethnicity, empowerment not power,” he said.