Is the imploding Jubilee Party planning to sweep the last remaining Ruto moles from Jubilee House? 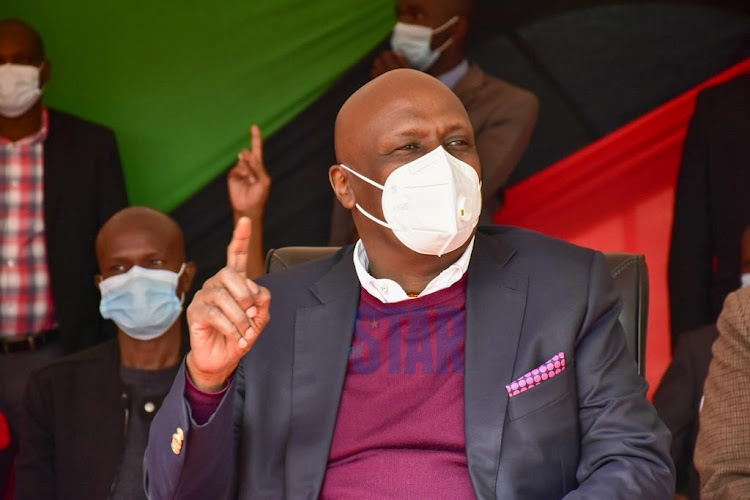 ONE FINGER: Kanu party leader Gideon Moi showS the party’s one finger sign during a BBI meeting held by the party at City Park, Nairobi. on December 10, 2020.
Image: MERCY MUMO

A senator from a county in Nyanza region is planning to ditch the ODM party for Gideon Moi's (pictured) Kanu outfit. This follows a political break-up with his governor who is said to be pushing for the county's woman representative as his heir apparent. Initially, it seemed that the senator was the governor's favourite until the deal appeared to have hit a dead end recently. The senator realised that the governor could no longer be keen on him after it became apparent that the woman representative is being favoured at many party events at his expense. Some senior party honchos at Orange House are also said to be determined to hand the ODM gubernatorial ticket to the woman MP.

Why were some politicians so liquid in the just-concluded Matungu by-election? Sources whisper to Corridors some politicians were bankrolled by certain quarters, which has caused unease in the country's political arrangement. It's said the bulk of the cash was dispatched on the eve of the elections. The money was meant to facilitate last-minute manoeuvres across the constituency by the candidate's agents as well as a surveillance squad assembled to visit polling stations.

Is the Jubilee Party planning radical surgery at the Pangani-based Jubilee House headquarters? The troubled party is said to have made far-reaching recommendations that would see a grand housecleaning to rid it of allies of Deputy President William Ruto. The surgery is also expected to affect a couple of regional directors as President Uhuru Kenyatta's confidants seek to take charge of key offices after the implosion in the party. The move could be part of the strategic decisions to completely sweep Ruto's moles from Jubilee following his association with the UDA party.

A Kieleweke politician from Central Kenya on Saturday night hosted a rare dinner for select politicians from the region at a high-end hotel along Thika Road. The dinner was uncharacteristically attended by a high-ranking government official. However, it has emerged that the seemingly impromptu dinner was carefully agreed on to cool political temperatures in a county in Central Kenya. The governor has been at war with some state officials and politicians for some time. Their differences have been threatening to turn ugly in the political arena. The Kieleweke MP was reportedly the mediator with the state official serving as the witness representing high interests in the meeting that brokered a truce, at least for now.