• Push by section of Coast leaders to form a local political outfit has run into trouble.

• Just what are elders from the Kikuyu community and a section of Kieleweke politicians from Mt Kenya region plotting? 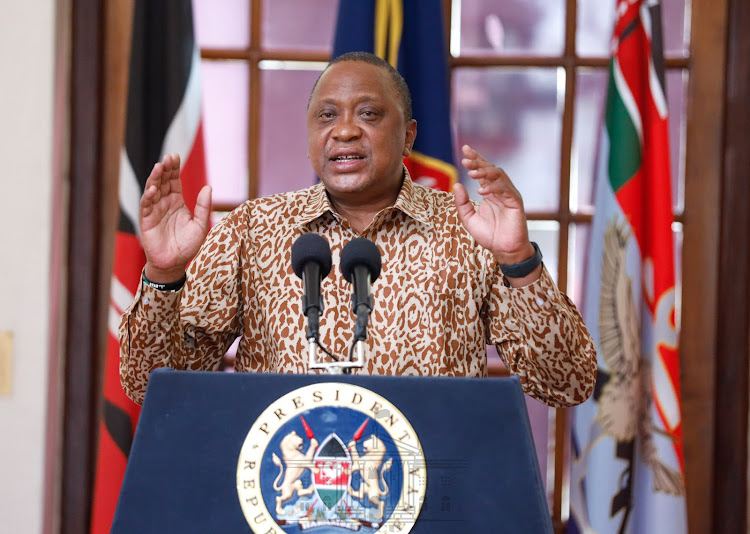 President Uhuru Kenyatta during the Sixth Presidential address on the coronavirus pandemic May16, 2020 at State House, Nairobi.
Image: PSCU

A little bird has whispered to Corridors that all is not well in the Kieleweke camp of the ruling Jubilee Party in Parliament. The bird reveals that a section of President Uhuru Kenyatta’s (pictured) allies are not happy with the way BBI activities are being coordinated by his point men in Parliament. A member of Parliament early this week was overheard saying that they are fed up with the drive’s coordinators and have opted to frequent a friendly office in the Executive where their grievances are listened to. They are planning to petition the President to rein in the House leadership and make leaders listen.

A county chief from Mt Kenya is on the radar of investigative agencies for allegedly demanding 10 per cent kickbacks from local contractors before he pays them their dues for work done. Several contractors were awarded tenders worth hundreds of millions of shillings. For two years now, some contractors have not received any payment, even after completing work. A little bird tells Corridors that the contractors have even been issued with certificates of completion after the county inspected the projects. Upset by the demands of the governor, some of the contractors are said to have tipped off anti-graft agencies about the governor's greed.

A push by a section of coastal leaders to form a local political outfit has run into troubles. This is after a majority of leaders from the region distanced themselves from the idea, citing resistance from the residents. This has left a top leader from the region—who has been seen as the face behind the clamour for the formation of the outfit—a lone ranger. According to those in the know, the man has been pushed into a corner and is now contemplating abandoning the push altogether. Some leaders are citing outside forces for the imminent collapse of the push to form the party.

Just what are elders from the Kikuyu community and a section of Kieleweke politicians from Mt Kenya region plotting? Well, Corridors or Power understands that the lot is plotting a series of meetings to prepare the ground for ODM leader Raila Odinga. Recently, according to insiders, they held an overnight meeting in a hotel in the Central region where a plan was crafted to market the former Prime Minister in the region that has opposed him for ages. Interestingly, the meeting was reportedly attended by a close ally of Deputy President William Ruto who has been critical of the handshake.