Could Ruto allies be celebrating chaos in Nasa?

State corporation board ignores shortlist, wants to hire director from one community.

• Mt Kenya governor who opposed BBI caves in, admits he skewed a report recommending the assembly reject the Bill.

• Some allies of Deputy President William Ruto seems to be celebrating the chaos and division that have rocked the opposition coalition, Nasa. 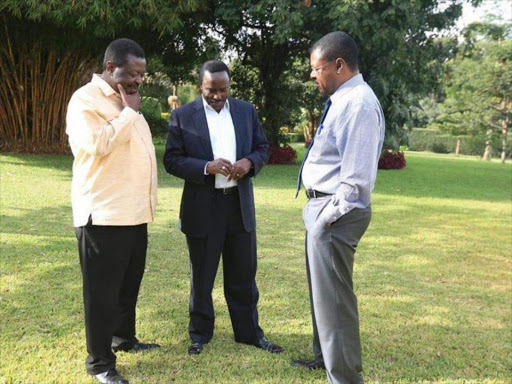 Some allies of Deputy President William Ruto seem to be celebrating the chaos and division rocking the Opposition coalition, Nasa. Early this week some legislators allied to the DP were overheard in Parliament mocking their colleague who has ardently supported opposition bosses. They told the man, "We are happy you are enjoying the fruits of a formidable" coalition. They added that "our man" has endured enough frustrations in Jubilee and it was high time they enjoy tribulations in the opposition that "caused troubles in our house". ODM chief Raila Odinga has traded barbs with his old Nasa principals Kalonzo Musyoka and Musalia Mudavadi.

Board members of a top state corporation are fighting viciously over who should be hired to fill the vacant positions of director, advertised early this year. The fight is pitting allies of President Uhuru Kenyatta and ODM leader Raila Odinga. While the board shortlisted six persons out of 13 applicants, the panel chaired by a renowned engineer has refused to interview the six applicants and instead is fixated on appointing a person who was not shortlisted. Our mole claims the board wants to appoint a person from a certain community to the position.

The harvesting season has officially begun. Not in the farms, but in the political arena. Brokers in counties are switching camps day and night to get money from politicians, especially for those in governor races. A clear example is in Siaya. A political broker known for theatrics and comedy with sexual undertones on the podium is milking politicians dry. The man had reportedly been on the payroll of popular politicos from the region. However, he publicly switched camp to another aspirant and dared his former benefactor, saying that he owes him nothing.  He is said to be planning to jump ship again. The broker is known to shuttle between Siaya and Kisumu.

A governor from the Mt Kenya region who initially opposed BBI seems to have endured enough frustrations and embarrassment before he eventually decided to back the drive. After conducting his own public participation, the county chief reportedly filed a report to the county assembly, advising MCAs to reject the Bill. However, days later, the MCAs and their senator held separate public forums where the residents overwhelmingly endorsed the document. Days later, the governor was summoned to a leadership meeting where he was taken to task to defend his report. An MCA reportedly told him off for misleading the county assembly to ‘deny our people’ money. The governor reportedly admitted that his report was skewed and promised to support the drive.