• The award-winning music video director has worked with artistes 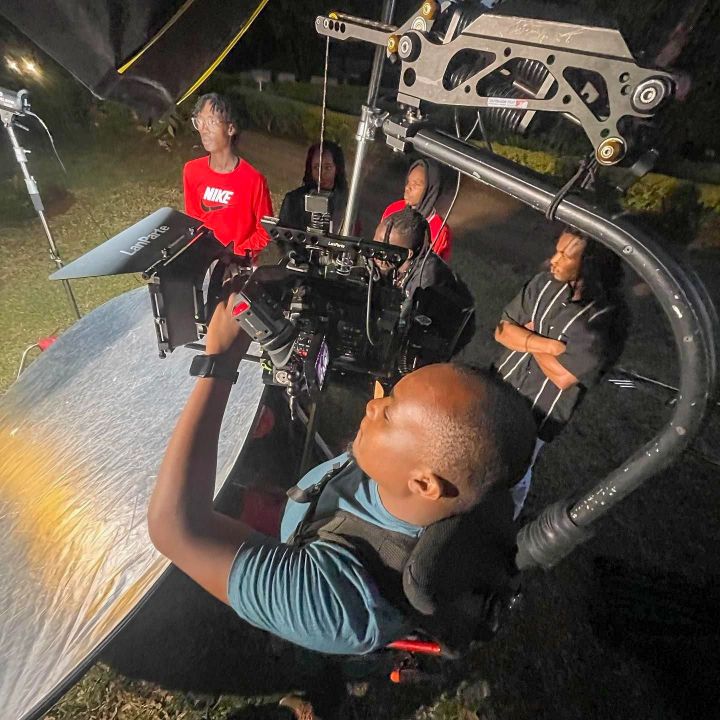 When Steve Mugo is on set, nothing is left to chance.

Every few minutes, he calls for a change of scene or gives new instructions. The crew, actors and dancers swiftly respond. After all, the director is perfection personified.

"As a director, I am responsible for planning the video shots, the location, getting the right equipment and costumes, coming up with a production schedule, filming the music video, editing and correcting," he said.

Speaking to us at his studio, Ambition Media House, Mugo explains that every second of filming is high stakes. A tiny mistake could translate to unending repeat shots.

"We have to develop videos that correspond with what an artiste is trying to convey in their music. Sometimes if we miss bringing the atmosphere or feelings the artiste wants, we can even spend four days non-stop on one set," he said.

This dedication and strong work ethic has made the award-winning director a popular choice for top musicians in East Africa.

Mugo's path to becoming a video producer began in his teenage years in Kayole, Nairobi, where he saw music videos being shot in his neighbourhood. The final output on TV, so starkly different from the original filming he witnessed, always fascinated him.

As a student of mass communication at the Jomo Kenyatta University of Agriculture and Technology, he capitalised on the free Internet on his campus to download tutorials and feed his insatiable curiosity in the field of videography.

Using the university's equipment, Mugo cut his filmmaking teeth by making short films and documentaries for his schoolmates at a small fee. By his final year, he had already built a name for himself.

He bought himself quality equipment with the money he received, and his videos started getting even more attention.

After he shot the video for 'Bampa' by the award-winning gospel artiste Kriss Erroh, other A-listers came knocking on his door.

While the recent growth of Africa's music has been attributed to increasing smartphone penetration and the digital revolution, the industry's success also depends heavily on producers' and videographers' knowledge, innovation and technical expertise when creating videos for artistes all over the continent.

Mugo has been at the forefront of this movement, using technology and high-quality equipment to provide cinematic visuals and creative colour grading (the process of manipulating film and video images to create creative, consistent colour tones throughout a motion picture).

His grading skills can be seen in the banger 'Hapo tu' by Nyashinski featuring Chris Kaiga, which currently has over 15 million views on YouTube.

Having been in the field for five years now, the 28-year-old acknowledges that he's a "new-era videographer" who enjoys the convenience of technology, as producers now don't have to rely on elaborate traditional studios to produce music.

"As the technology evolved and laptops turned into moving recording studios able to capture pristine audio and mix thousands of tracks, the role of producers and videographers started to shift and evolve, too," he said.

He boasts that a whole set of equipment can comfortably fit in his car boot, unlike 10 years ago, when videographers and producers had the headache of hiring vans to fit equipment for a solo video shoot.

"Technology has saved us from using dollies, which were time-consuming and heavy, but now we use gimbals and phone rigs to shoot even on mountains.

And while tech is good, in the current space, it's vital for actors in the industry to figure out what different elements they can offer or else be out of business," he said.

Mugo, who looks up to Nigeria's Director K and Meji Alabi, adds that his extensive knowledge of different cameras, which he uses to "bring about different outcomes depending on lighting and landscapes," has also given him an edge in music video production.

He, however, calls on governments to back them up by investing in music-friendly policies.

"It is now up to stakeholders and governments to create an environment that allows artistes and their content to grow and reach its full potential," Mugo said.

According to the International Federation of the Phonographic Industry's Global Music Report 2022, music revenues grew by 9.6 per cent in sub-Saharan Africa, primarily driven by streaming.

Post a comment
WATCH: The latest videos from the Star
by Lucy Githugo for bird story agency
Big Read
19 January 2023 - 04:00
Read The E-Paper