How climate change is pushing Baringo women to early graves

Swelling Lake Baringo has disrupted lives of hundreds of residents, leaving them in biting poverty and suffering

• Ekai, whose husband was killed by a police officer, struggles to raise her kids alone.

She wiped the tears welling up in her eyes with the back of her hand and took a deep breath. https://bit.ly/3UXxyiX 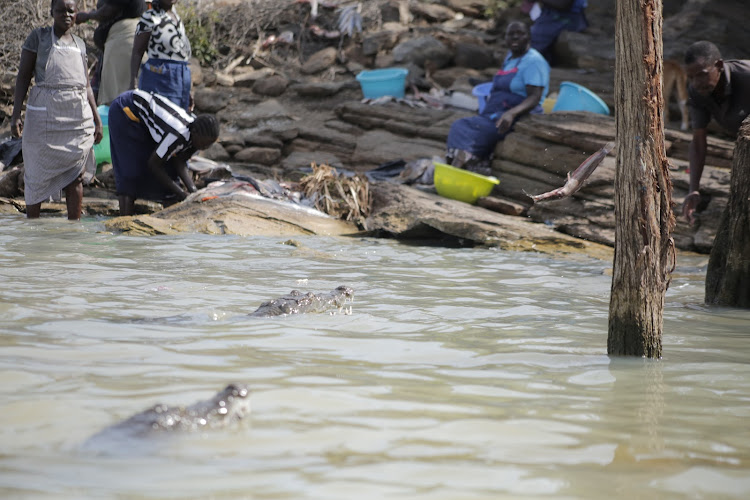 She wiped the tears welling up in her eyes with the back of her hand and took a deep breath.

For a few minutes, Alice Ekai said nothing. Her two children who sat next to her on both sides squeezed themselves closer, jerking their mother back to reality.

“Things have been tough. My family is barely surviving. Drought and floods take shifts in burdening our already miserable lives,” she said.

The 35-year-old let tears flow as she recounted how climate change coupled with fate conspired to push her to utter poverty.

“The river has been moving, taking up our land and everything with eat. My husband was killed by police under unclear circumstances leaving me to take care of our four children,” Ekai lamented. 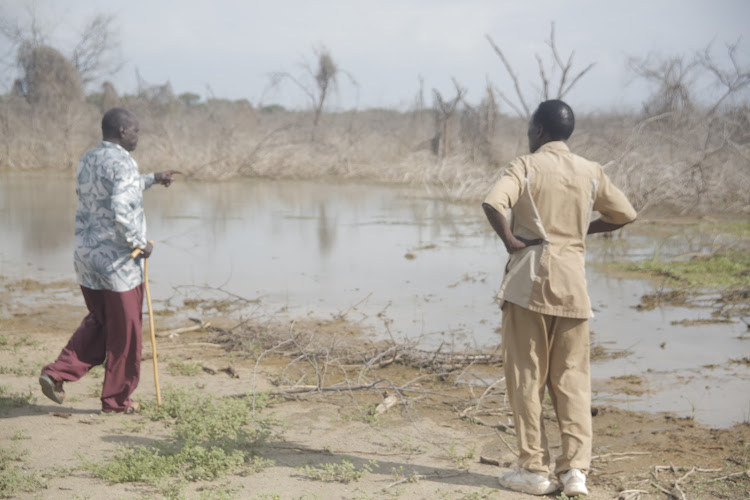 After her house, which was built at the shores of Lake Baringo was submerged in water, Ekai rented a mud-walled house at Kampi ya Samaki town in Baringo North.

“While they were still alive, my parents, my two siblings and I used to live happily 300 meters away from here," Ekai said pointing at a place covered by water mass.

After the death of her parents, Ekai and her three siblings dropped out of school for lack of school fees. The mother of four and her sister resorted to getting married at an early age.

In the beginning, Ekai said life was bearable as both the woman and her husband had a consistent source of income from the Lake.

But life took a rough turn when Ekai lost her husband, David Owino, 40, alias 'The Crocodile Man' or 'The Scorpion Man' on October 6, 2018.

Listen to this story via Podcast

Owino was a tour guide and he would as well entertain local and international tourists by calling and feeding orphaned crocodiles and also letting deadly but 'friendly' scorpions crawl on his body without harming him.

In a good season, Owino would collect Sh3,000 to Sh4,500 a day, money he spent on paying house rent, food, clothing and his children's school fees.

His family, which is yet to understand the motive for his killed, is still crying for justice. He was just accused for being drunk and disorderly, and then he was frog matched to a nearby police post, where he was lynched.

Locals suspect Otieno might have been killed by jealousy officials for making money 'unlawfully' from wildlife. 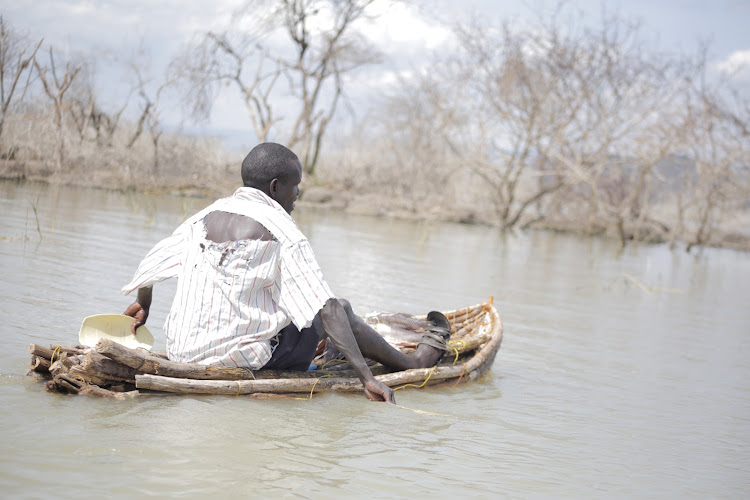 A fisherman struggles to ride on an improvised wooden canoe to fish in Lake Baringo on September 18
Image: JOSEPH KANGOGO

His wife, Ekai said she also used to earn some cash by wearing traditional costumes and dancing to entertain tourists before the business collapsed soon after the lake flooded.

All the major hotels like Soi Safari Lodge, Block Hotel and Roberts Camp, Omari and Leakey's places were submerged.

"I used to earn some little cash, combined with my late husband's income to fend for our children comfortably," Ekai said.

She has resorted to fetching firewood, carrying jery cans of water on her back, washing people’s utensils and clothes to feed her children.

"I struggle daily to get at least Sh100 then I squeeze my budget to buy a kilogram of maize flour and vegetables for the evening meal," Ekai said.

She also says she struggles to give each of her schoolgoing children at least Sh10 for lunch. "They just go to a small food kiosk to buy counted spoons of githeri or mandazi mixed with soup to survive," she said. 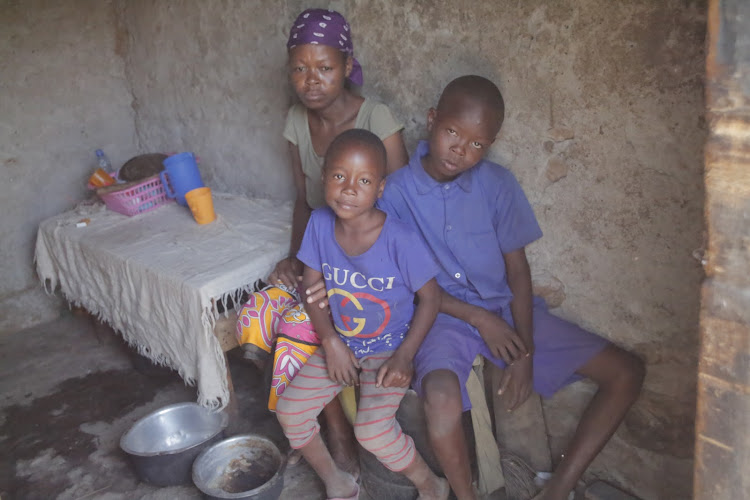 Young widow Alice Ekai, 38, with her kids put up in a rickety structure in Kampi ya Samki, Baringo North subcounty.
Image: JOSEPH KANGOGO

She would further go and wash utensils in the backstreet eateries to earn Sh30 for her lunch.

Ekai counts herself lucky when she gets at least Sh150 to buy fish to to change her children's bare diet.

None of the locals living around the flooded Lake Baringo understands climate change as a concept, but its harsh effects are pushing them to their early graves.

The population is now appealing to the government, international agencies and partners to urgently intervene with humanitarian aid to help them out.

Scientists say all the Great Rift Valley lakes including the swollen Lake Baringo are located along the geologically active fault terrains and are therefore mainly controlled by the geological structures. For this reason, the increasing water levels affect livelihoods. 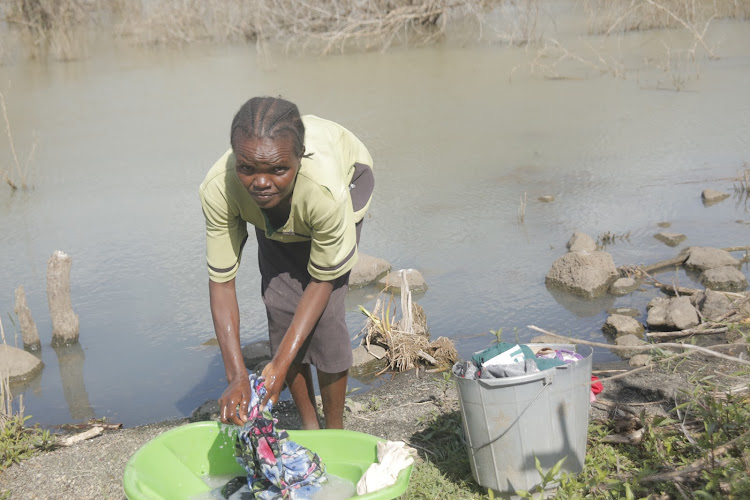 The situation was further aggravated by heavy rains in the region from May to December 2020. Due to effects of climate change, it is harder to predict the seasons.

The affected communities have endured disruption of their livelihoods; they have been rendered homeless, grazing lands and farming fields marooned by the floods. 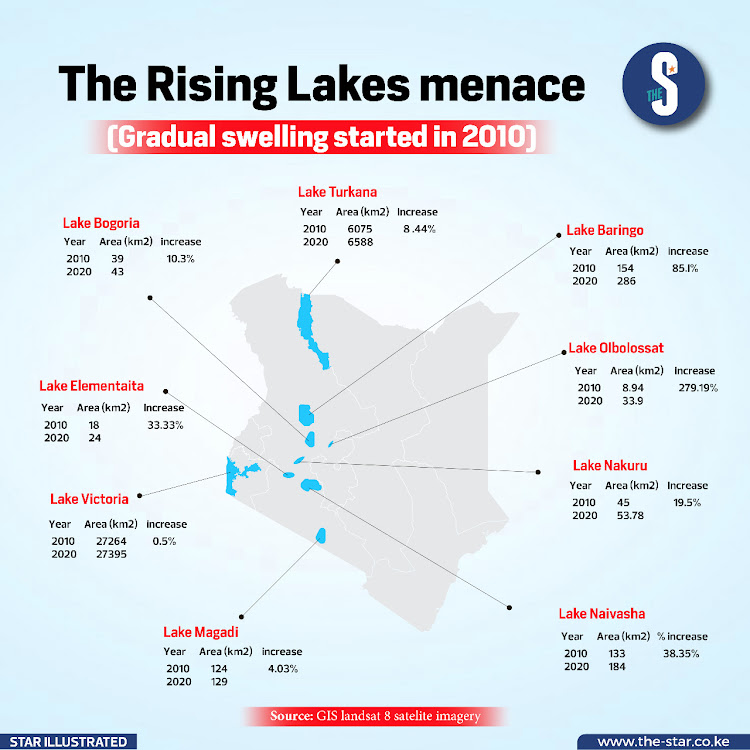 Ekai is among over 30,000 families displaced after Lake Baringo flooded beginning May 2020. The situation is largely blamed on massive deforestation.

Hundreds of acres of crop farms, several schools, hospitals, hotels, and roads were swallowed by the lake.

The hard-hit locals are women, children and the elderly who have now been reduced to beggars at Kampi ya Samaki trading centre.

"Not me alone, every family here is affected because if you can go around all these households, I am pretty sure you will not get any food, the mush you will get is only tea without milk and sugar" Ekai said.

Her younger sister Harriet Ekai, who also lost her husband to illness, lives nearby raising her three children alone. She is nursing a leg injury after being involved in an accident, besides being jobless.

She used to work as a house help in Nairobi before coming back to her rural home to nurse the injury. "I don't have anyone to help me considering the situation my elder sister is going through," she said.

The harsh situation forced her 14-year-old teenage daughter to drop out of school, conceived and both are now being taken care of by the sickly mother. 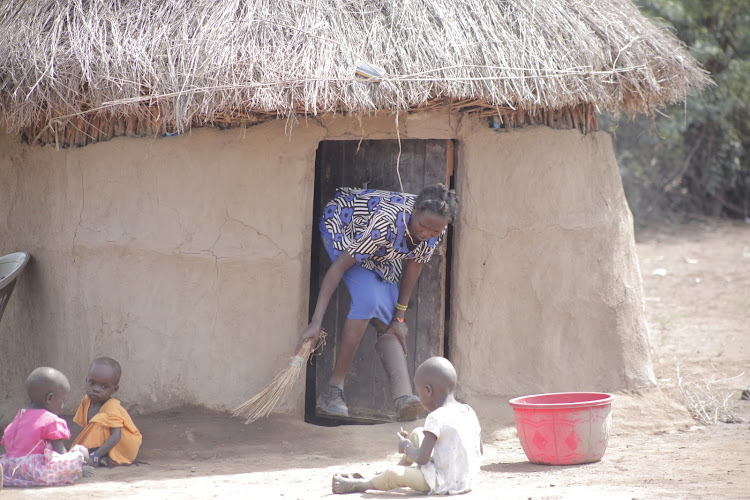 Jennifer Chebet, who was once a fish monger, said she ditched her business and she turned on menial jobs immediately the lake flooded.

Chebet said she could use an improvised wooden boat and a hook to fish in the lake but since the lake flooded, dangerous crocodiles and hippos make it difficult to fish.

"I have now resorted to washing people’s clothes and fetching firewood to feed my family" she said.

An elderly woman Miriam Akeno, 70, living in Kokwa Island said life has become hard since the floods and Covid-19 pandemics struck them in 2020.

Akeno said they seem to have been forgotten since the tragedy occurred, saying they have not heard anybody including their local leaders speak about helping them.

"We are only watching and reading in the media about our plights but no one has ever thought of visiting us with humanitarian aid. We hope that will happen soon," she said.

Christine Chesire from Loruk said lake flooding brought blessings and curses, saying despite the plenty of water near their homesteads, people  were being attacked by crocodiles and hippos.

"Before fetching water or washing clothes at the shore of the lake, one has to throw stones to scare away the dangerous and hungry reptiles," she said.

She further said the flooding has contributed to spread of diseases like malaria.

Chesire blamed the dire situation on heavy deforestation due to felling of trees and massive burning of charcoal around the lake. 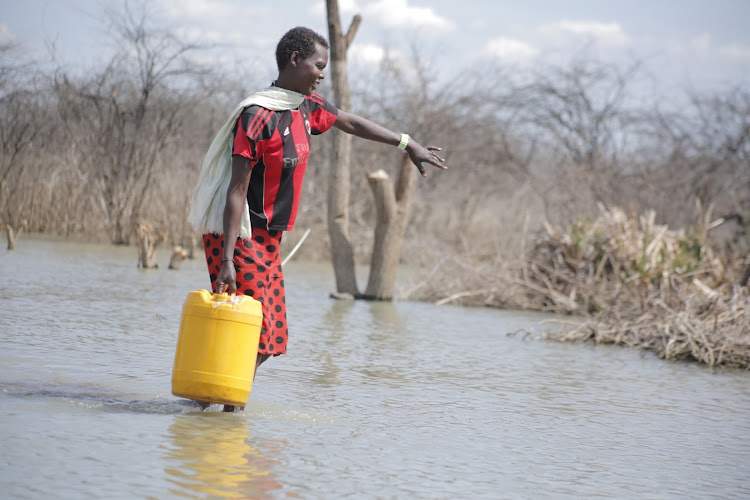 Loruk elder David Chemursoi who lives on the shore said back in 1975, elders in the area had predicted about the flooding and even warned residents not to construct houses near the lake.

"They further warned us not to bury them or any of the family members there when they die and we are now seeing their word has come to pass," Chemursoi said.

He said immediately after the disaster occurred,  people got some donations like foodstuff, nets and utensils from Kenya Red Cross and World Vision.

"We are now appealing to the government to come up with ways of restoring our livelihoods," he said.

Chemursoi suggested pumping of the excess lake water to boost farming among the warring Tugen, Pokot and Ilchamus communities in Baringo North, Tiaty and Baringo South.

Elder Samuel Chirchir said a demographic survey should be carried out now to know the exact number of people affected. 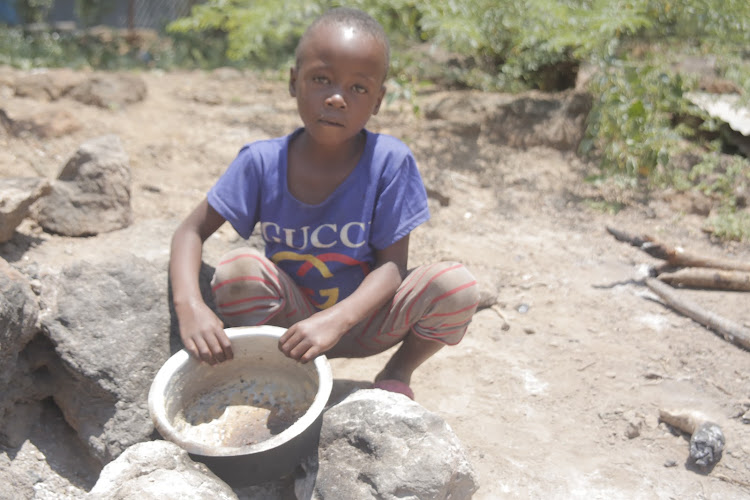 She said all indicators showed the lake was likely to flood extensively again with the return of heavy rains.

"Any time the lake bursts, a huge population living near the water will be displaced and rendered homeless," Kipkoshiom said.

He attributed the frequent flooding and massive soil erosion to desertification caused by felling of trees for charcoal burning and cultivation along rivers and natural water catchment areas.

Climate change, siltation of the lake making it shallower, and geological changes are also cited.

The NCCK Baringo chapter has come up with a five-year county strategic plan 2022-2027 to push stakeholders to deal with the crisis.

"It is time we all brought our minds together to discuss and address the challenges of climate change, "Kipkoshiom said.

He pledged on his inauguration to push for enhanced funding of the county disaster department to tackle emergencies.

"I am aware of the rising levels of poverty. I will mobilise both the county and national government resources and ensure they trickle down to reach the common mwananchi," he said. 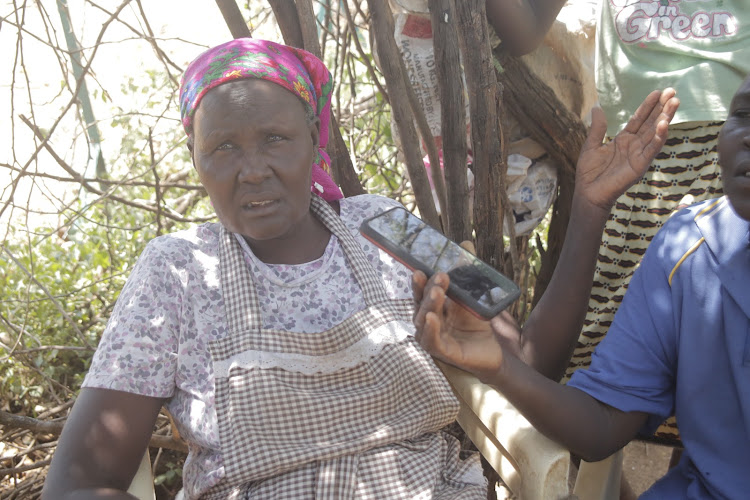