Comparison between 2017 and 2022 presidential election petitions

• In 2017, four out seven Supreme Court Judges voted in favour of nullifying President Uhuru Kenyatta’s re-election calling for a repeat poll in 60 days.

• In the 2022 presidential election, however, the Supreme Court upheld the election of William Ruto as President of the Republic of Kenya. 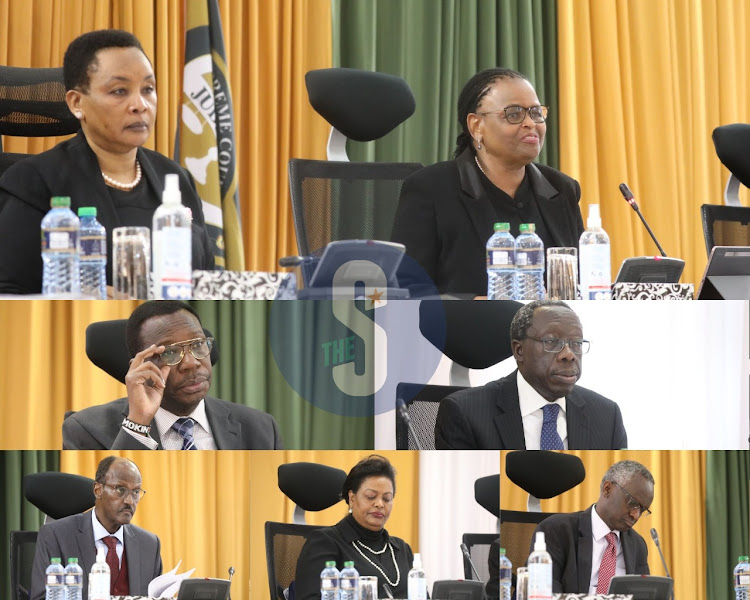 During the 2017 presidential election petition, the Supreme Court of Kenya nullified the election of President Uhuru Kenyatta.

Then Chief Justice David Maraga said the August 8, 2017 election had not been conducted in accordance with the law and declared it "invalid, null and void".

In making their judgements, four out of seven Supreme Court Judges voted in favour of nullifying President Uhuru Kenyatta’s re-election calling for a repeat poll in 60 days.

In the case, Raila Odinga was the first petitioner while Kalonzo Musyoka was the second petitioner.

While the issues raised were largely similar to those raised in 2017, the apex court set out four issues which needed determination by the petitioners who were challenging the August 8, 2017 presidential poll.

The 2017 case was largely determined based on the failure of IEBC to conduct the election as stipulated by the law.

These are areas they worked on fixing, in the run-up to the August 9 presidential poll.

In 2022, however, the determination was dependent on the law and failure by the petitioners to provide proof of their claims.

On this, the Supreme Court found that the 2017 presidential election was not conducted in accordance with the principles laid down in the Constitution and the written law on elections. The judges said it was neither transparent nor verifiable.

“On that ground alone, and on the basis of the interpretation we have given to Section 83 of the Elections Act, we have no choice but to nullify it.”

The court found that there were irregularities and illegalities in the Presidential election of August 8, 2017 which were substantial and significant that they affected the integrity of the election, the results not- withstanding.

The seven-judge bench found that illegalities and irregularities committed by the 1st respondent (IEBC) were of such a substantial nature that no Court properly applying its mind to the evidence and the law as well as the administrative arrangements put in place by IEBC can, in good conscience, declare that they do not matter.

“We have shown in this judgment that our electoral law was amended to ensure that in substance and form, the electoral process and results are simple, yet accurate and verifiable. The presidential election of 8th August, 2017, did not meet that simple test and we are unable to validate it, the results notwithstanding,” they said.

The apex court said it had the mandate to invalidate a presidential election under Article 140(3) of the Constitution as read with Section 83 of the Elections Act, inter alia, for reasons that there has been non-compliance with the principles in Articles 10, 38, 81 and 86 of the Constitution as well as in the electoral laws.

In the 2022 presidential election, however, the Supreme Court upheld the election of William Ruto as President of the Republic of Kenya.

The court had received nine petitions challenging Ruto’s victory in the elections. Two were dismissed while seven were consolidated into one case.

Unlike in 2017, after the case was consolidated into one, the apex court judges set out nine issues that all petitioners sought determination by the court. The 2017 petition had only four issues set for determination.

In its Judgement, the Supreme Court said that the petitioners largely failed to give proof of their allegations.

The issues for determination include;

The Judges said that upon considering all pleadings, submissions and ICT scrutiny of vote tallying and recounting report, they were not persuaded by the allegation that technology deployed by IEBC failed the standard of article 86 (a) of the Constitution on integrity, verifiability, security and transparency to guarantee accurate and verifiable results.

"In our view, the petitioners failed to produce evidence to the contrary," Chief Justice Martha Koome said.

The Court said there were no significant differences captured between the Forms 34A uploaded on the public portal and the physical Forms 34A delivered at Bomas that would have affected the overall outcome of the presidential election.

The Judges said no credible evidence was to support the allegation that Forms 34A presented to agents differed from those uploaded on the public portal.

The apex court said it was not shown that by postponing the elections in the named electoral units, IEBC acted in bad faith or was influenced by irrelevant reasons and considerations.

The Court said IEBC gave a reasonable explanation for the vote differential citing a category of voters who only vote for president such as prisoners and diaspora.

The seven-judge bench in a unanimous decision said there was no proof that IEBC did verify and declare the election in accordance with the law. They said they could not nullify the election based on internal fights of the IEBC Commissioner and that the four ‘rebel’ commissioners didn’t prove that the result was compromised.

"The four commissioners have not placed before this court any information or document to show that the results were compromised or that the results would have substantially differed from that declared by the chairperson.”

The bench said that, "We have deliberated on this proposition and found that it's not mathematically sound and that the rounding off done by IEBC chairperson was correct."

They found that the petitioners did not present a water-tight case to warrant the setting aside of the presidential election on the basis of having not met the threshold provided under Article 138 (4)(a) of the Constitution.

The Supreme Court of Kenya declared the election of the first respondent (William Ruto) as President-elect under Article 43 of the Constitution.

All parties were also directed to bear their own costs.