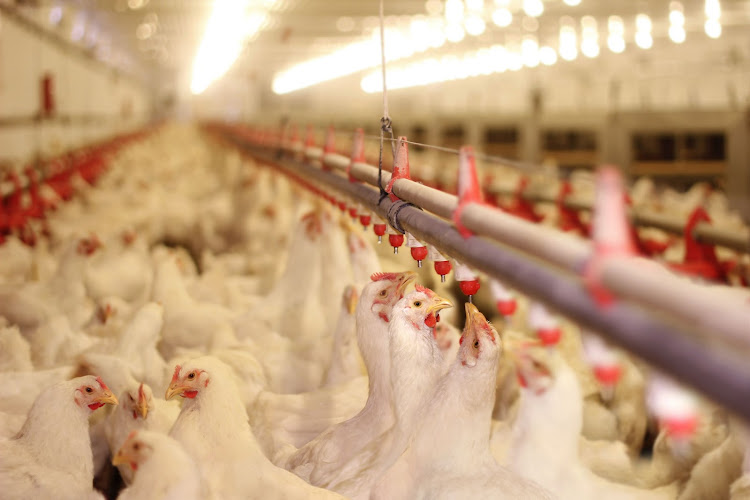 It is the cornerstone of a dangerous industrial food system that profits from the suffering of billions of cruelly farmed animals each year.

These farms tend to be fewer in number but larger, with more animals per holding in enclosed, climate-controlled buildings, with more automation and minimal labour.

All or most of the feed comes from outside the farm and is concentrated feed whose price relies on global markets.

The farm is typically ‘vertically integrated’ where a company owns two or more functions in the supply chain, for example the production of feed, production of animals and the supply of antibiotics.

These farming practices do not acknowledge the sentience and welfare of animals and create significant health and environmental impacts. 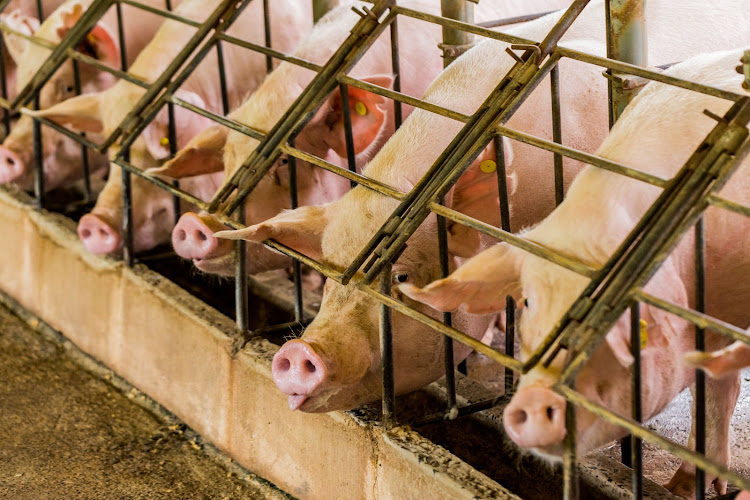 Pregnant mother pigs live in cramped cages (gestation crates) where they can barely move with no enrichment. This causes severe stress, discomfort and suffering, but these are still used in many parts of the world. The white foam around the mouth is a signal of false chewing or bar chewing generated by the frustration of natural behaviour and restricted diets.

World Animal Protection, the global voice for animal welfare, with more than 70 years’ experience is campaigning for a world where animals live free from cruelty and suffering.

Their goal is to goal is to change the way the world works to end animal cruelty and suffering for both wild and farmed animals. They collaborate with local communities, the private sector, civil society, and governments to change animals’ lives for the better.

According to a report by World Animal Protection, over the next 30-40 years the demand for Livestock derived foods (LDFs) – will grow rapidly in the African continent (meat consumption is forecast to grow by 30% by 2030) due to growth in human population (from 1.2 billion today to over 2.5 billion in 2050), increasing consumer purchasing power and urbanization.

The future growth and transformation of the African livestock sector towards industrial livestock systems is happening at an unprecedented pace and scale and if uncontrolled, could also have negative effects on public health, the environment, and livelihoods.

This will lead to increasing outbreaks of zoonotic diseases, such as avian influenzas and other animal food borne diseases; increasing pollution of water, air and soils by nitrates and antibiotics; and is likely to force pastoralists and small farmers to exit the livestock sector, with negative impacts on their livelihoods and food security. 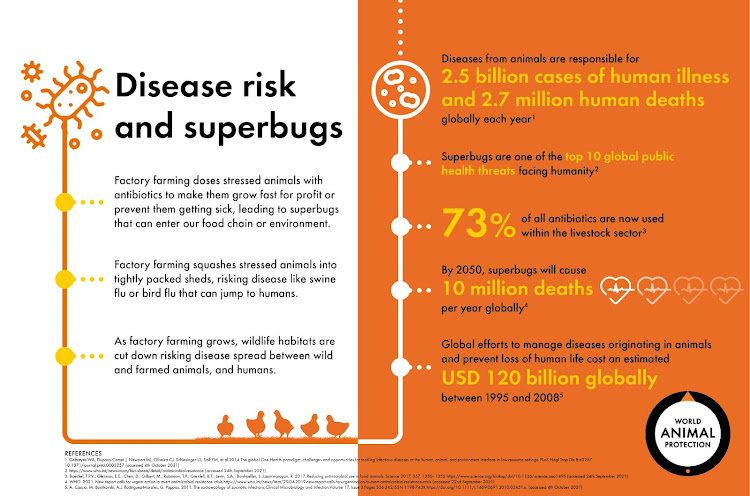 Africa is now catching up with Asia as a zoonosis disease hotspot with the densities of humans and factory farmed animals also increasing—particularly in coastal West Africa, North Africa and parts of East Africa.

Africa is home to a large portion of the world’s remaining intact rainforests, however pressure from industrial systems mean encounters between people, livestock, and wildlife could provide the catalyst for new and emerging zoonotic diseases.

Antimicrobial Resistance (AMR) has already been documented to be a problem for HIV and the pathogens that cause malaria, tuberculosis, typhoid, cholera, meningitis, gonorrhoea, and dysentery. Without action, 4.1 million people across Africa could die from AMR by 2050.

Across Africa over 100 million people in Africa are facing catastrophic levels of food insecurity whilst many countries in Africa are experiencing alarming increases in overweight and obesity, such as South Africa where rates for adult females are among the highest in the world.

The continued growth in factory farming and the westernisation of human diets will have dramatic consequences on land use in Africa (for example more land will be used for animal feeds) which will make food security more challenging in areas which are already food insecure.

Pastoral systems are in decline within Africa as land resources are increasingly used for more industrial forms of agricultural production practices. 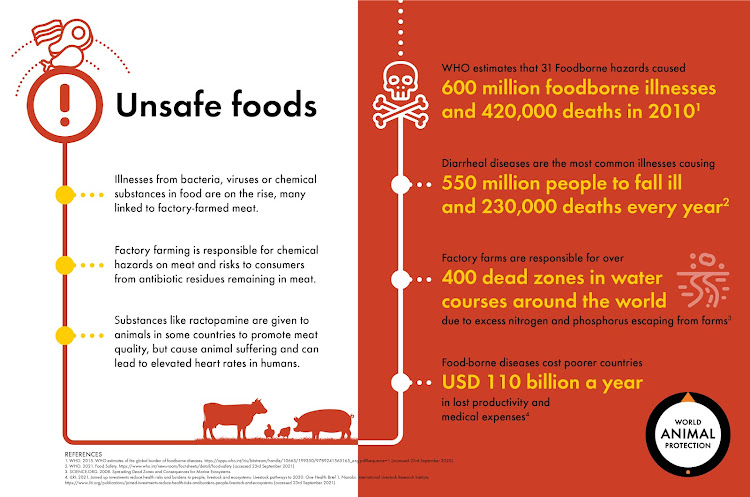 Africa has the highest burden of foodborne diseases, relative to its population. More than 91 million people are estimated to fall ill and 137,000 die each year.

Non-typhoidal Salmonella, which can be caused by contaminated eggs and poultry, causes the most deaths, killing 32,000 a year followed by deaths caused by the pork tapeworm, cyanide in cassava and aflatoxin, a chemical produced by moulds that grow on grains or corn that have been stored incorrectly.

The productivity losses associated with unsafe foods in Africa were USD 20 billion in 2016, and the cost of treating these illnesses are an additional USD 3.5 billion.

These costs are heaviest in larger, middle-income countries such as South Africa, Nigeria, and Egypt, yet are also significant and rising elsewhere.

Groundwater nitrate exceeds drinking water specifications in many parts of the southern African region and is associated with concentrated feedlot operations.

The anticipated expansion of industrial livestock production is forecast to contribute towards increasing incidences of manure, methane and nitrate contamination of water, soils, and air, particularly across sub-Sharan Africa. 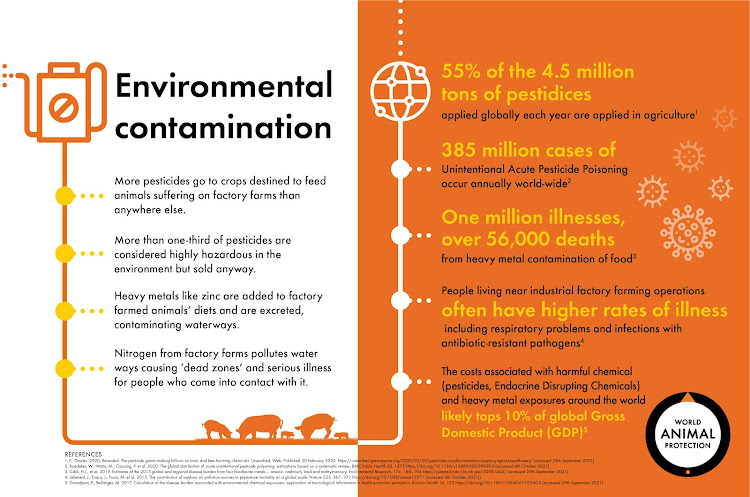 The true health impacts and costs of industrial livestock systems remain hidden and yet they damage our health through multiple and interrelated pathways of impact.

They make us ill, damage our planet and cause suffering to billions of farmed animals each year. Whilst industrial livestock foods may appear cheap, they cost trillions of dollars in poor health and ecological damage annually.

Many of these ‘external costs’ are being picked up by taxpayers, citizens, rural communities, smallholder farmers, pastoralists, and future generations.

Governments need to act now - to stop support for factory farms, reorientating agricultural subsidies in support of agroecological, regenerative and pastoral livestock systems, committing to global reductions in average meat production and consumption, and tackle the unbridled power and dominance of the few multinational corporations.

Within the decade for action, now is the time for governments to deliver better health and wellbeing outcomes for people, planet, and animals

Farmed animals deserve good lives, free from cruelty and exploitation which can only be achieved when we take on the global food systems that fuel animal abuse and cruelty. Since the scale of the challenge is immense, immediate Action is required, Now! 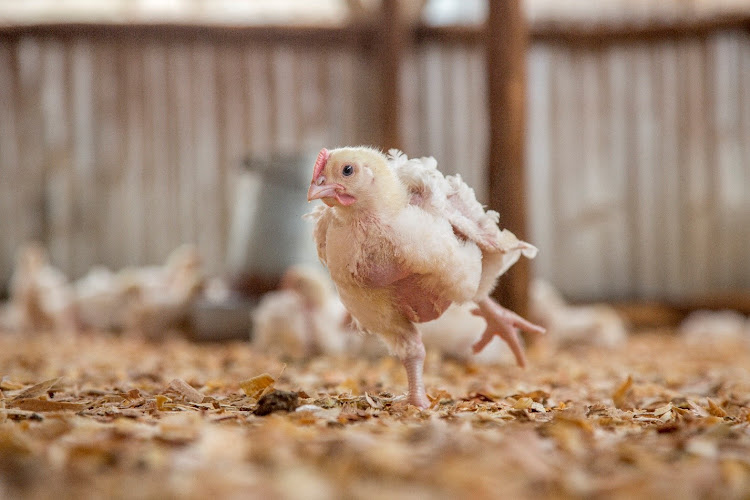 19 day old broiler (meat) chickens in an indoor, deep-litter system typical of independent farms in East Africa. The shed on this farm has open sides to encourage more natural light and better ventilation - the chickens seem to have enough space to display a variation of natural behaviours (like scratching, preening and dust-bathing) but are also showing signs of heat stress by panting to regulate their body temperature. World Animal Protection is calling for better welfare standards for the broiler industry.

World Animal Protection is currently running a petition against factory farming in Africa.

The petition aims to sensitize people across Africa on the current issues affecting animals kept and reared in factory farms as well as the health impacts of factory farming & contribution to climate change and to prompt them to take action by signing a petition asking the African governments to set up a moratorium on factory farming.

This petition signatures will be handed over to government officials and focal persons of the different African nations ahead of COP 27 happening later this year in Sharm El-Sheikh, Egypt.

This should help in appealing to them to bring more urgency to a Bill that puts a temporary ban (moratorium) on the setting up of factory farms and setting clear and prompt timelines for the development and implementation of this bill.