Concerted efforts have brought it up to 8.8% against target of 10% 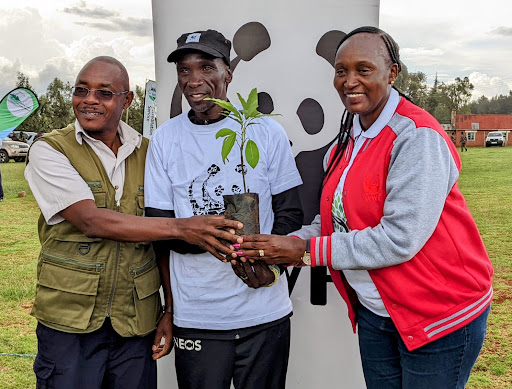 Slow but sure wins the race. That may well be the mantra for Kenya's efforts to achieve its long-sought forest cover target of 10 per cent.

All hands are on deck to achieve it, with Kaptagat among the beneficiaries of reforestation initiatives. The 6th edition of the tree planting drive in Kaptagat forest took place on July 15.

Environment PS Dr Chris Kiptoo lauded the concerted efforts by the public and the private sectors, which he credited for the increased national forest cover from 5.5 per cent in 2013 to 8.8 per cent in 2022.

The National Forest Resources Assessment Report 2021 shows that Kenya’s forest cover now stands at 8.8 per cent from 7.2 per cent in 2018.

“Our tree cover is now way ahead of our constitutional target of 10 per cent as we are now at 12.3 per cent,” Kiptoo said.

The six-month assessment is the first to ever analyse Kenya’s tree cover, which is now at 12.3 per cent.

Kiptoo said Kenyans have played a huge role in the conservation and protection of the environment by growing trees, rehabilitating degraded lands and restoring ecosystems in an endeavour to increase the national forest cover.

He said the ministry, in collaboration with stakeholders, is implementing the National Tree Growing Strategy, which supports environmental restoration initiatives, where county governments and community engagement are critical.

The PS said Kefri’s capacity has been enhanced from sic seed production centres to 18 nationally.

On July 15, Kiptoo and his Regional Development counterpart Dr Belio Kipsang launched the fencing and reforestation of the degraded 50.8ha of Kaptagat Forest adopted by Kipchoge.

“As a bank, we are part of the private sector efforts towards making sure we are financing green energy going forward,” he said.

Muthui said climate change leads to things like droughts and famine, which affect agriculture, which is financed by banks.

“It is connected, that is why we have to be careful and concerted to make sure we are involved in managing climate change,” he said.

The project will be undertaken in partnership with the Environment ministry to support the national agenda of enhancing the county’s forest cover.

Muthui said the bank has donated Sh3 million to support the rehabilitation and conservation of the Kaptagat Forest.

“As per International Air Transport Association (IATA), we should be at net zero by 2050,” Ndegwa said.

Ndegwa said within the next 10 years, they will do at least two million tree seedlings as part of their contribution to dealing with greenhouse gas emissions.

The CEO said the airline will continuously adopt technology as part of its ambitious plans to curb emissions.

“The other concerted efforts are to join hands in environmental conservation, and we have always been trying to contribute towards tree planting initiatives in areas we fly to net off what we have done,” he said.

Ndegwa said they, for instance, fly to Eldoret 24 times a week from Nairobi and seven times from Mombasa.

“Our work is to make sure we are supporting in whatever way we can come in, working closely with stakeholders such as  Eldoret Water and Sanitation Company (Eldowas) for a long time,” he said.

Ndegwa said their annual target is to plant at least 10,000 trees every year in Eldoret.

Jambo Jet also supports tree planting initiatives in other areas of the country, such as Kisumu, Mombasa and Nairobi.

With the help of the Participatory Forest Management Plan, the Community Forest Association and the Kenya Forest Service will work on a formula in which the community can access grass in the area for livestock.

Communities will also be able to practise beekeeping within the enclosed forest area to generate income.