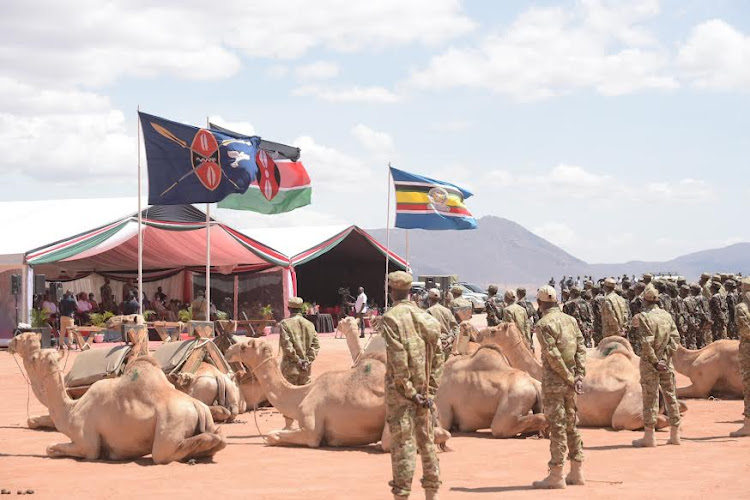 Camels and personnel at the launch of the Camel Calvary Team in Isiolo county on July 14
Image: HANDOUT

The Camel Calvary Team is a new elite unit under the BPU. It is the latest unit to be unveiled in the service in the reforms and restructuring process that started in 2018.

When President Uhuru Kenyatta announced more than 20,000 officers from the Administration Police Service will join the Kenya Police in a major move, many thought the death of the APS was near.

But the developments within the service now show it is among the elite and leading units that are being relied on in many aspects.

The changes have seen APS officers focus on their main role of protecting the country’s strategic installations, VIP protection and border security.

Already, the service has taken over patrols on the main Kenya-Somalia border.

They have been deployed to some disturbed areas to reinforce other agencies there. Further, the Anti-Stock Theft Unit is now run by the AP unit, joining the Rapid Deployment Unit and Border Patrol Unit.

The APS is now completely specialised in its core mandate, which includes border patrols, guarding critical infrastructure and dealing with stock theft.

Under BPU, there are AP Special Forces that comprise the Special Recce Team (SRT), the Special Operations Group (SOG), the Camel Calvary Team as well as Swat.

The teams have been getting much-needed attention in terms of funding and welfare. Officials say they have conducted various operations and liberated many places from terror-related groups and criminals.

For instance, the groups were deployed to disturbed areas in Laikipia and Marsabit, where they jointly with other agencies liberated the areas from criminal gangs.