The artistry and freedom in Somali beauty parlours

• Women chat about their marriages, insecurities, frustrations and moments of joy 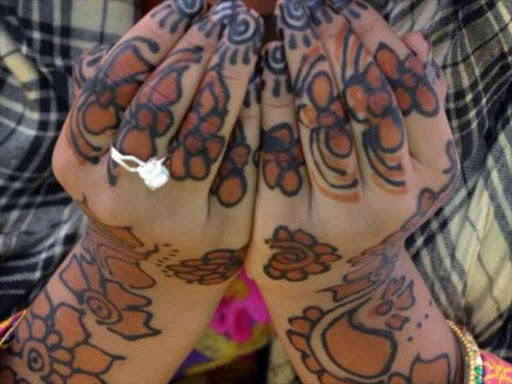 A Muslim woman with hands decorated by henna
Image: AGENCIES

I was relaxing in a comfy chair when a woman came at me with a long, sharp knife.

That first time, I was terrified.

Now I am accustomed to women approaching me with blades. It is all in the name of beauty.

Carving knives are used in some beauty parlours to scrape dried henna paste off legs, arms and hands, revealing delicate, dainty patterns on the skin that slowly fade away with time.

Whenever I go to Nairobi, my friend Suheyba meets me in the predominantly Somali neighbourhood of Eastleigh, known as 'Little Mogadishu'. After a lunch of camel meat, we go for henna.

The last salon we went to was about the size of a cupboard, separated from the bustling street outside by nothing more than a ragged curtain.

Inside, everything feels different.

In communities where women are expected to cover up and keep quiet, beauty parlours are a place for them to breathe and throw off the trappings of their male-dominated societies.

Sometimes this happens quite literally. On a recent visit, a woman marched into the parlour and declared it was far too hot. She took off her veil, her long dress, her petticoats and all manner of other undergarments, including her bra.

In communities where women are expected to cover up and keep quiet, beauty parlours are a place for them to breathe and throw off the trappings of their male-dominated societies

It is the same next door, in Somalia itself, where every woman is covered from head to toe. Plenty wear niqabs, which cover the whole face except for the eyes.

The first time I visited a Somali beauty salon, there was something strange about the woman who opened the door.

It took me a few seconds to register that she was not wearing a hijab, her luxuriant black hair flowing down below her shoulders.

"Oh, take that nonsense off," she said as soon as I went in, helping me to remove my headscarf and other garments.

When we got down to the bottom layer, a long underskirt, she gathered it up and stuffed it into my knickers so I could walk around without tripping over.

She took me into a room where women and girls lounged around in various states of undress.

Others wore skin-tight jeans and crop tops - usually hidden under their abayas, the long robes they wear in public.

I spent a lovely afternoon there, talking about halal dating, cupcakes and how you have to have a baby pretty much every year if you did not want your husband to find a second wife. Plus, those annual babies should ideally be boys.

The first time I had henna applied in Somalia, the beautician produced a little yellow cardboard box. There was a photo on it of a smiling man with dark hair.

It was men's hair dye from Indonesia. She tipped it into the henna powder, stirred it in and applied it to my white skin.

The result was jet black designs that look great on Somali women's skin but stark and ferocious on mine. It took months to fade.

And then there is the self-declared republic of Somaliland. One of my favourite things to do when I am in the capital, Hargeisa, is to pile into a rickety taxi with a group of female friends and head for Bella Rosa Day Spa.

It was started by a Somali woman who decided to return home from Canada, where she had lived for decades after fleeing civil war.

It is staffed almost entirely by Kenyans. Many spent time working as beauticians in the Gulf.

Some have horror stories of physical and psychological abuse in Dubai and elsewhere. They say that although they are still far from home and the pay is worse, they prefer being in a Somali city.

I learn many things during my beauty salon chats. Therapists and their clients open windows into their lives — their marriages, insecurities, frustrations and moments of joy.

In recent months, the conversation has shifted to politics when I visit my favourite beauty therapist in London.

She is Eritrean and has a tiny salon on a side street in the lively Brixton area.

She tells me how the previously harmonious Ethiopian and Eritrean diaspora in the UK has been torn apart by the war in Ethiopia's Tigray region, in which Eritrean troops are involved. Former friends shun each other, depending on their ethnicity.

But back to the ladies with the knives. Whenever they produce them, I am reminded of another knife-wielding Somali woman whose intent had nothing to do with beauty.

It happened after I interviewed her in the city of Bur'ao. She was sitting in a makeshift shelter in the livestock market, stirring food in a big pot. In my report, I described her as poor.

When she heard my piece, she was furious. How dare I say she was poor?

She went and found the person who had taken me around the market. When she met him, she drew out a long knife from under her robes and declared that she would use it to kill me if she saw me again.

It is the killings and the three decades of conflict that usually come to people's minds when they think of Somalia.

It is often described as the world's most dangerous country. A haven for pirates and suicide bombers.

It did not surprise me that that woman wanted to kill me because I described her as poor. Somalis are fantastically proud.

And it's that pride that strikes me in the beauty parlours, where elaborate hairstyles and exquisite henna designs are created — then largely hidden under headscarves and long robes.

I hope I will never meet the woman in the livestock market again and that the only knives that come anywhere near me are those used to reveal the beautiful patterns on my skin.

Black beauty in a world that cherishes light skin

Beauty is not just about skin colour, but society makes it seem so
Sasa
2 years ago

The wedding house has no bed and a couple are not supposed to go out.

Why do Muslim men wear beards?

A man without a beard in Islam is no different from a woman, some clerics say.

Use of henna is a visible marker to display an individual’s piety and devotion. But is it applicable to everyone?

The clothes combine both culture and religion to bring out unique pieces.