Nairobi lottery scammers: How Kenyans part with their cash easily

These con professionals are all masters of manipulation and illusion.

•Others describe Nairobi in Swahili as a rocky land, meaning one that is difficult to eke a living in.

•Whether everyone who has lived in the city for some time has been conned or not is a matter of conjecture. 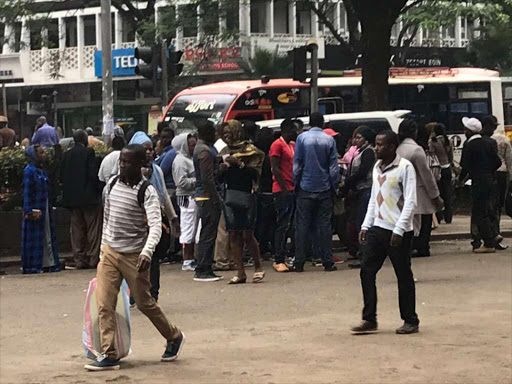 Others describe Nairobi in Swahili as a rocky land, meaning one that is difficult to eke a living in.

But to some, it is a dream place after completion of school. Many move to the city in search of employment opportunities to save their families from destitution.

In Nairobi, one does not need a strategic point to take note of the hustle and bustle that has characterised the city for decades.

It is a common saying that in Nairobi, being scammed is akin to a religious baptism that one must go through to enter heaven.

Whether everyone who has lived in the city for some time has been conned or not is a matter of conjecture.

It is a typical day in Nairobi when this writer took a stride in the congested streets of Nairobi on a mission to discover the world of an unscrupulous group of businessmen.

Small circles of partially bored and curious groups of people are evident in several spots on the streets.

They operate mostly in downtown Nairobi under the guise of running a lottery.

Peter Mbatha, who has had an unforgettable encounter with one of the groups, said they are commonly known as "pata potea".

They provide a platform where one plays and wins or loses. In short, it's a local version of professional gambling.

Mbatha was walking to class when he was implored by one of the groups to try his luck.

Loosely translated to, " Try brother, today is your day."

He inquired and they told him to scratch a coupon card worth Sh1000 to win an electronic gift.

"Okay bro, all we got is some electronics. You win, we give you your due. No shortcuts," they told him.

"They gave me a laptop and a blender," Mbatha narrated saying he confirmed the Laptop was working when he got it.

"But on getting to my place, the thing was not even powering on," he lamented.

Mbatha could not believe it. He was dumbfounded.

"It's like they make you think it is working when in a real sense, it's not."

His story is one in a collection of traumatic experiences of many city residents.

The case is no different for Paul Maina who lost his fees in a manner he is yet to comprehend to date.

"I had not deposited the money. I hate bank queues and my parents don't trust Mtaani Agents, so I was waiting for a time when bank customers are few."

Then the proverbial Satan told him to play street cards games.

After about an hour, he decided to head back to school for a lesson after which he walked back to a bank to deposit the fee.

" I'm so sure what I felt was worse than a heartbreak," he said as revealed his fees was missing.

"I retraced my steps to the spot, they were all gone."

Juliet, a victim narrated how she was told to pick a card. The lead gambler then shook her hand.

"I swear they used some juju on me because I can't remember playing. But when I came to my senses, my handbag was gone," she said.

The aforementioned cases bring to the fore the cardinal rule of gambling; the house always wins.

Shockingly, the scammers are licensed businessmen who operate in the full glare of the public.

They pitch their tents at strategic points in the city.

Parts of the Gikomba market are also strategic for them.

Time and again, the public has complained that even after reporting the crimes, no action is taken and justice remains a dream.

" I went to the police after and they were so rude I gave up and left," Maina said.

"They even asked me how I expected them to trace and arrest the suspects if I couldn't find them after the game. I lost Sh3000 and important credentials that were in the bag."

For Juliet, reporting the incident to the police did not yield the desired results.

"They told me they were going to nab the woman. I am still waiting," she said.

"It is so sad that we are suffering as the police watch. I wonder how many scamming cases they get per day and how many are arraigned and punished for it," she added.

In 2020, the National Police Service and Nairobi City Council were faulted for aiding cons who pose as telecommunication agents to carry out their missions.

This led to the City council revoking all licences affiliated with the street gamblers.

Despite such measures, being conned in the city remains not only a lucrative business but also a norm that plays out in the open.

Yatani also proposed a change in taxation regime of liquid nicotine.
News
2 months ago
WATCH: The latest videos from the Star
by SHARON MWENDE
Big Read
04 May 2022 - 21:46