Telecom operators in Africa are significantly cutting the use of diesel.

• Telecom operators in Africa are significantly cutting the use of diesel to power their base stations as the race to Net-Zero emissions heats up.

• Since the start of the year, the wave of solarisation of telecom towers has expanded rapidly across the continent. 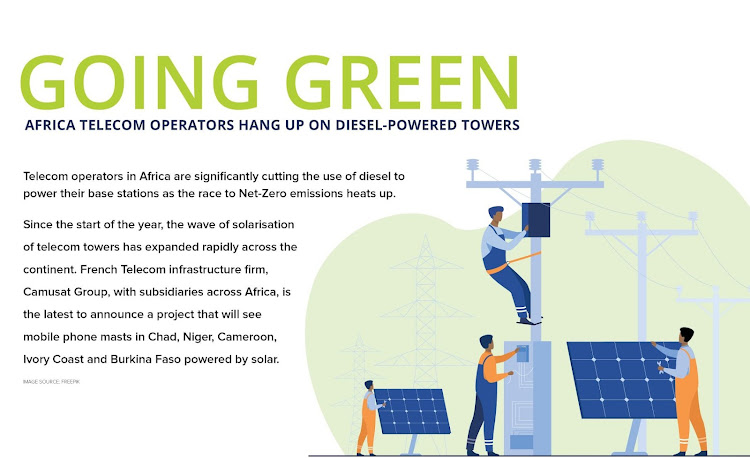 The incessant roar of generators is slowly fading at telecom base stations across Africa, as more and more operators turn to environmentally-friendly solutions to power mobile communications on the continent.

Telecom operators in Africa are significantly cutting the use of diesel to power their base stations as the race to Net-Zero emissions heats up.

Since the start of the year, the wave of solarisation of telecom towers has expanded rapidly across the continent.

French Telecom infrastructure firm, Camusat Group, with subsidiaries across Africa, is the latest to announce a project that will see mobile phone masts in Chad, Niger, Cameroon, Ivory Coast and Burkina Faso powered by solar.

The 60 million euro project will be executed by Camusat subsidiary AktivCo SAS, an Energy Services Company (ESCO) which owns 3,000 sites in its portfolio and aims to operate 10,000 sites by 2025.

“It reinforces our ability to meet the Telecom Operators’ demand for green and efficient energy to secure their networks,” said Richard Thomas, CEO of Camusat Group.

GSMA in its Mobile Net Zero report dubbed, State of the Industry on Climate Action 2021 acknowledges there is a relentless drive for energy efficiency in the telecom industry, ‘matched with an industry-wide switch to decarbonized and renewable energy supply.

“These twin efforts can deliver up to 80 per cent of the sector’s decarbonisation, not only in operators’ operations but also through their supply chains,” says the report.

IHS Towers, the biggest operator of mobile phone towers in Africa affirms in its 2020 Sustainability report that it will continue to reduce diesel dependence by increasing the amount of renewable energy.

“Reducing our reliance on diesel helps to reduce our carbon emissions and save costs through lower fuel and logistics costs, as well as a reduced need for the maintenance of generators,” said IHS.

On its website, Orange Africa lists Guinea, Sierra Leone, Madagascar and Liberia among countries where its towers have achieved at least 50 per cent renewable energy reliance. Solar-powered sites are saving the telecom operator some 55 million litres of fuel annually.

According to Alioune Ndiaye, the CEO of Orange Africa and the Middle East, the company hopes to meet 50 per cent of its electricity needs through renewables by 2025 and reach net zero carbon by 2040.

“We are on track to succeed in this challenge,” said Ndiaye.

The GSMA report shows that 60 operators controlling almost 70 per cent of the global industry by connections and 80 per cent by revenue are already disclosing their climate-related activity and targets.

Post a comment
WATCH: The latest videos from the Star
by CONRAD ONYANGO FOR BIRD
Big Read
19 November 2021 - 14:21
Read The E-Paper