Africa could restore some 20 million hectares of forest

The impact of climate change made it difficult for the rising tree cover to offset the rate of forest loss.

• North Africa is dominated by the Sahara Desert. 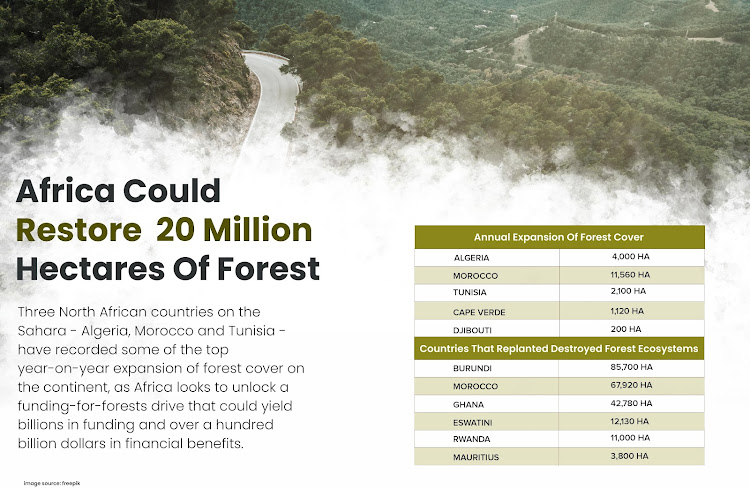 Africa could restore some 20 million hectares of forest
Image: BIRD

Three North African countries on the Sahara - Algeria, Morocco and Tunisia - have recorded some of the top year-on-year expansion of forest cover on the continent, as Africa looks to unlock a funding-for-forests drive that could yield billions in funding and over a hundred billion dollars in financial benefits.

As leaders make fresh commitments and look to raise more funds to boost tree cover at the COP 26 meeting in Glasgow, Scotland, three Northern Africa countries are leading the continent in ramping up forest cover.

The Food and Agricultural Organisation in its latest report, the Review of forest and landscape restoration in Africa 2021, lists Algeria, Morocco and Tunisia among five countries that have sustained the highest annual increase in forest cover in Africa, over the last five years. The other two are Cape Verde and Djibouti.

North Africa is dominated by the Sahara Desert, a region where 99 percent is dryland. Only 2 percent of some 725 million hectares is under forest.

A commitment to increase forest cover through the African Forest Landscape Restoration Initiative (AFR100) – a coalition of 31 African countries - has begun bearing fruits with the report estimating 625.25 million ha of forests were regenerating in Africa and 11.39 million ha had been planted each year by 2020.

“Agroforestry, woodlots and timber plantations each made up about a third of the increase in tree cover in sub-Saharan Africa (700 000 ha) in the 2011–2019 period,” says the report.

Restoration efforts are however looking up, with Rwanda, Malawi and Nigeria beginning a new push to mobilise 2 billion dollars to increase forest cover ahead of COP27, which is scheduled to take place in Africa.

Last week, environment ministers of the three countries – Jeanne d’Arc Mujawamariya of Rwanda, Nancy Tembo of Malawi, and Mohammad Abubakar of Nigeria pledged to scale up the investments in land restoration projects - a move that is seen catalyzing some 15 billion US dollars of funding.

“That larger sum could begin the restoration of a potential 20 million hectares by 2026 and bring an estimated 135 billion US dollars in benefits to 40 million people,” said AFR100 in a statement.

Several donors, including the African Development Bank, the Government of Germany, the Global Environment Facility, the Bezos Earth Fund, the Global EverGreening Alliance, and the Green Climate Fund have backed the investment plan. Thirty-two countries have joined the project and pledged to restore nearly 128 million hectares since COP21 in 2015.