African countries are taking note and adjusting their power strategies.

• Kenya and Morocco will be the most conducive power markets for sustainable investment in 2021, the financial information services firm said.

• Both states boast the most attractive balance between renewables generation, grid efficiency and share of renewables in overall generation. 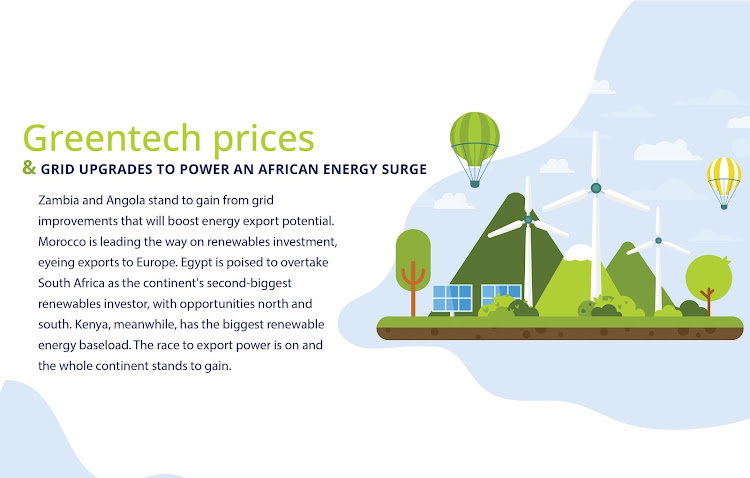 Zambia and Angola stand to gain from grid improvements that will boost energy export potential. Morocco is leading the way on renewables investment, eyeing exports to Europe. Egypt is poised to overtake South Africa as the continent's second-biggest renewables investor, with opportunities north and south. Kenya, meanwhile, has the biggest renewable energy baseload. The race to export power is on and the whole continent stands to gain.

An emerging price gap between carbon-intensive and renewable energy, thanks to fast-falling prices for the latter, is positioning Africa to be a big winner in the global energy stakes.

International Renewable Energy Agency (Irena), figures highlight a decline in the cost of new wind farms and solar panels by as much as 62 percent. The cost of large-scale solar power has dipped by 85 percent, onshore wind has fallen 56 percent and prices for offshore wind have declined by nearly 48 percent, in less than a decade.

The Guardian reported this could undercut the cost of up to 800 gigawatts (GW) worth of coal plants, worldwide.

ESEEP will link the northern and southern grids of Angola, connecting 400,000 homes to the country's grid and ultimately connecting Angola to the Southern African Power Pool (SAPP) through Namibia. Angola has ambitions to tap its huge hydroelectric potential and export renewable energy across the region.

Fitch is also bullish that Zambia will become a net exporter of electricity this year as hydropower output rises with higher water levels in Lake Kariba. The completion of two new units of the Kafue Gorge Lower Power Plant is also expected to supplement the southern African state's power output.

"With ongoing investment into its power grid infrastructure and the change from a net importer to a net exporter of electricity, we note that the country will be able to offer investors improved reliability of electricity supply," Fitch projects.

Meanwhile, Kenya and Morocco will be the most conducive power markets for sustainable investment in 2021, the financial information services firm said.

Both states boast the most attractive balance between renewables generation, grid efficiency and share of renewables in overall generation.

Within Fitch's 10-year-forecast period, Kenya will remain a net exporter of electricity, with investors in the country enjoying significantly greater power security than those in many other markets on the continent.

"The composition of its renewable electricity supply, with a strong geothermal component, makes it one of the few markets globally to generate baseload renewable electricity on a large scale, making it attractive to sustainable investors dependent on reliable power supply," the report read in part.

At the same time, Egypt is expected to overtake South Africa to take the third position on the sustainable investment table, behind Morocco.

Fitch forecast Egypt and Morocco to be renewables generation growth out-performers in Africa between 2021 and 2030 as the price for renewables falls further and markets for green energy grow in Europe and Africa.

"The fundamental driver of this change is that renewable energy technologies follow learning curves, which means that with each doubling of the cumulative installed capacity their price declines by the same fraction," a report from Oxford University said.

"The price of electricity from fossil fuel sources however does not follow learning curves so that we should expect that the price difference between expensive fossil fuels and cheap renewables will become even larger in the future."

Post a comment
WATCH: The latest videos from the Star
by SETH ONYANGO FOR BIRD
Big Read
09 November 2021 - 15:56
Read The E-Paper