‘I’m vaccinated because I care’: Covid jab a saviour to tourism 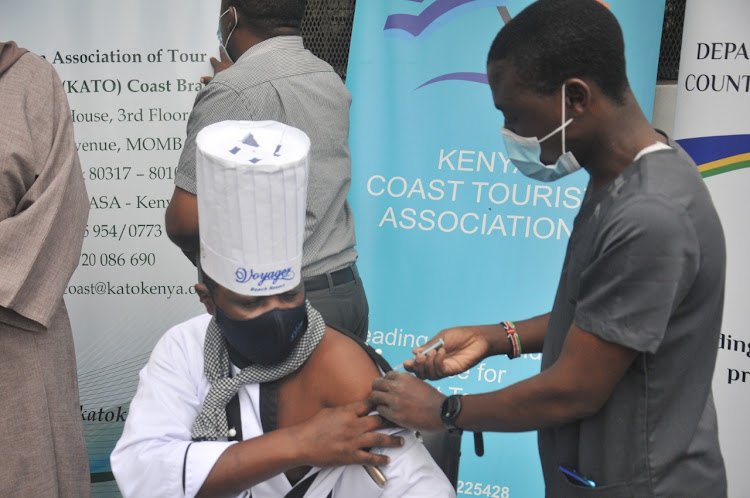 For seven months this year, Kenya endured a cold shoulder from one of its key tourism sources, the United Kingdom. When it was finally removed from the red list in September, Tourism CS Najib Balala credited vaccination campaigns.

This was in the wake of a vaccination drive targeting frontline workers in the tourism and hospitality sector since April, with 50,000 doses allocated to the hotel industry.

“Having all our hotel staff vaccinated is an assurance to guests that their safety is guaranteed while on holiday in Kenya,” Balala told the Star in a recent interview.

Kenya had protested that it had fewer Covid-19 infections than the UK by the time it was added to the red list in May. The move added insult to injury in a tourism sector already reeling from losses for more than a year, during which most hotel facilities were forced to either close down or work with a minimal workforce.

However, the UK argued that it uses various factors to categorise countries, including the prevalence of new variants, vaccination rate and continuous scientific research on the coronavirus. To date, only around 2.8 per cent of Kenyans have been fully vaccinated against Covid-19.

To reverse the losses brought about by Covid-19, hoteliers were urged to come up with attractive and affordable packages for both local and international tourists.

However, to attract more international tourists, the country’s Covid-19 prevalence and infection rates must be lowered. As such, the Covid-19 vaccine is now considered a ‘saviour’ to the tourism sector.

On September 27, 10 days after the UK travel ban was lifted, Balala urged hoteliers to come up with special badges for their vaccinated staff.

Speaking during the World Tourism Day dinner at Diani Reef Beach Resort in Kwale, he said the special badges with a message that one is vaccinated will give the clients more confidence that they are in safe hands.

“We all know the importance of having our staff vaccinated. Therefore, to give our clients more confidence, the private sector should come up with badges that say, ‘I’m vaccinated because I care’ for all their staff,”  Balala said. 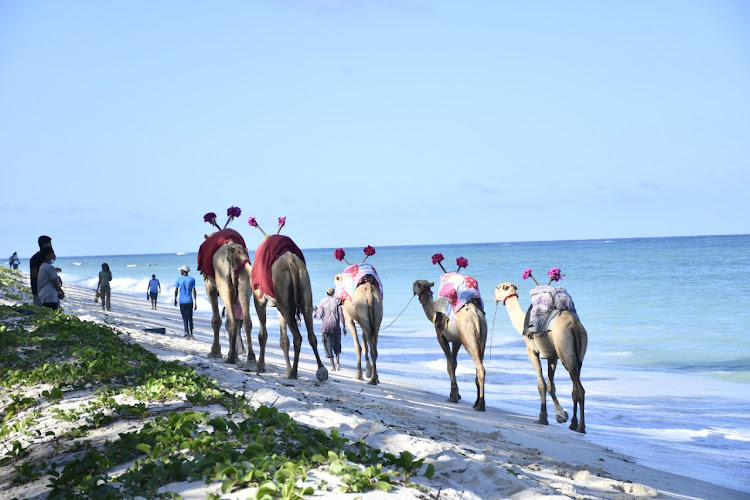 Camels walk along the white sandy beaches of Diani at the South Coast. Beach operators are optimistic that reopening of the economy will help revive the sector, which was on its knees
Image: LABAN WALLOGA

According to data from the Tourism Research Institute, Kenya received only 305,635 international arrivals between January and June 2021.

Balala said they were encouraged by the numbers, although this was only a fifth of the 2 million visitors received in 2019.

“But we understand this is because of the Covid-19 pandemic and the lockdowns that ensued, which affected the travel trends this year,” he said.

Balala said the number of UK arrivals to Kenya dropped to number five due to the effects of the unfair travel restrictions and “putting Kenya in the red list despite our Covid-19 numbers giving a different scenario”.

Vaccinating hotel staff alone, however, is not enough. The national rate is also important. As of October 20, 4.7 million vaccines had been administered across Kenya, according to Health CS Mutahi Kagwe.

Of these, Kagwe said, 3.4 million were partially vaccinated, while those fully vaccinated were 1.3 million. The government is targeting 27 million out of the overall population of 55 million Kenyans.

“The uptake of the second dose among those who received their first dose was at 36.8 per cent. The proportion of adults fully vaccinated was 4.8 per cent,” Kagwe said.

Diani Hospitality Owners vice-chairperson Bobby Kamani the national government must be applauded for the effective rollout of vaccinations in the hospitality industry.

“It is important for all those working in the hospitality sector to ensure they are fully vaccinated for their own comfort, the comfort of their family members and that of the guests,” he said.

At Diani Reef Beach Resort, all the 220 staff have been vaccinated against Covid-19, said Kamani, who is also the managing director of the facility.

“Having all our staff vaccinated gives more confidence to our guests. They are sure they are served by staff who are safe,” he said. 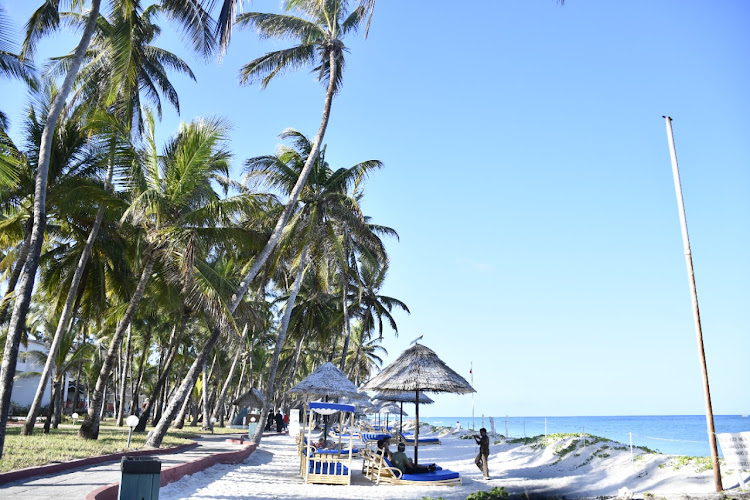 Globally, we have seen stadiums are now full. More sectors of the economy have reopened because of the effective rollout of the Covid-19 vaccine. For Kenya’s tourism sector to fully reopen, vaccines are the only sure bet

Sam Ikwaye, the Coast executive director of the Kenya Association of Hotelkeepers and Caterers, said countries that have effectively rolled out Covid-19 vaccine have fully reopened their economies.

“Globally, we have seen stadiums are now full. More sectors of the economy have reopened because of the effective rollout of the Covid-19 vaccine. For Kenya’s tourism sector to fully reopen, vaccines are the only sure bet,” Ikwaye said.

He said more tourists will be comfortable visiting a country whose Covid-19 prevalence rate is not a threat to the general public.

“Most international tourists have already been vaccinated against Covid-19. They would want to be served with people who are also fully vaccinated. Therefore, hoteliers must work to ensure all their staff are fully vaccinated,” Ikwaye said.

He said it is easier to have all the staff vaccinated against Covid-19 rather than having regular Covid-19 testing after every two weeks.

“It is safer and cheaper to have all staff vaccinated rather than forcing the staff to go for regular Covid testing, which is very expensive,” Ikwaye said.

The hoteliers boss said an estimated 70 per cent of all frontline workers in the hospitality and tourism industry at the Coast region have been fully vaccinated.

“Travel restrictions, lockdowns and other Covid-19 measures did not help suppress the spread of Covid-19,” he said.

“As a matter of fact, it had so much negative impact on all sectors of the economy. The vaccine is the only hope left to cure the affected sectors.” 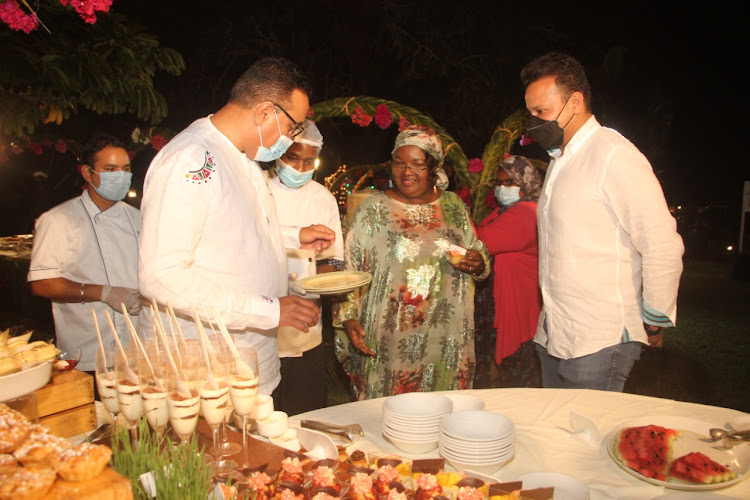 Kenya is hoping that with the reopening of the economy, the tourism sector will pick up and more international guests will arrive into the country.

On October 20, during his Mashujaa Day address, President Uhuru Kenyatta said the country has made progress in containing Covid-19.

He issued a directive lifting the dusk-to-dawn curfew, which has been in place for more than 18 months.

“I hereby order and direct that the nationwide dusk-to-dawn curfew that has been in effect from March 27, 2020, be and is hereby vacated with immediate effect,” Uhuru said.

At the Coast, tourism stakeholders were the biggest beneficiaries of Uhuru’s directive on the lifting of the curfew.

For more than 18 months, many nightclubs and hotels were forced to close down, while others were on the verge of collapsing due to the negative impacts of Covid-19.

According to the Pubs, Entertainment and Restaurants Association of Kenya, about 7,500 bars, hotels and entertainment spots have shut down countrywide, with an estimated loss of 250,000 jobs.

Those shuttered at the Coast include Bunga Bunga and Zee Lounge at Kenol and Fontanella in the central business district. Ikwaye said when Covid struck, most businesses were affected.

“Imagine you have electricity and water bills to pay, staff and suppliers to be paid. Many investors could not cope with this and that is why many opted to cut down the number of staff or close down altogether,” he said.

He said the new directive by the President gives investors another chance to reorganise themselves.

“As we are heading towards December, we are hoping to see clubs and hotels that were closed down opened again,” he said.

Hasnain Noorani, the managing director of PrideInn Hotels, said the last 18 months were crazy for individuals working in the hospitality and tourism sector.

“When Covid-19 hit the country in March last year, most hotels were forced to shut down, and by the time we were opening, it was around September,” he said.

“After the resumption of services, we were observing occupancy of between 5 and 10 per cent because there were a lot of uncertainties; fear and cessation of movement that had been imposed by the government.”

He said the hospitality industry is glad the curfew has been lifted because this will give all local and international tourists’ confidence to come to Mombasa without having fear of any travel cessation or lockdown.

“The nightlife in Mombasa is an integral part of the entire hospitality business because when people come to the region, they want to have that freedom,” he said.

“Therefore, we thank the President for doing this at such a good time before December. This will give people the confidence to do bookings for the festive season.”

Noorani said as hotels, they will continue to operate with the Ministry of Health protocols on Covid-19.

How lifting Kenya's curfew may push revellers to get jabbed

For now, Kenyans are just happy that they too now have uhuru.
News
9 months ago

Shortage of syringes could cripple Covid-19 vaccination in Kenya, says WHO

Regional director for Africa says looming threat of a vaccine commodities crisis hangs over the continent.