Young innovator builds an eco-friendly generator a year after he launched his ultralight aircraft.

•Brian told the Star he got pressure because of the attention and media coverage he received after unveiling his model ultra light plane.

•Suddenly relatives wanted to be associated with him and friends who were not there were now glued to him.

Innovation has always been his closest companion, with an undying love for cars being the language Brian Kipkirui speaks best.

Coming from a poor background, Brian, at a young age started crafting toys to keep himself busy and entertained when he was not in school.

Everything fascinated him, and he wished to know more and understand the mechanism behind it.

Brian, 24, is the first born in a family of five. He grew up in Chepkoilele, a village in Eldoret town, raised by a single mother and his grandmother.

He was a second year student at Nairobi Technical Training Institute, pursuing electrical engineering but with his mother having to retire from her clothes business and his dad suffering from leukemia he had to drop out of school due to financial constrains.

"I had to drop out so that I could find a job and means to survive in the city."

He did not have a lot while growing up so he got used to playing with old junk and card boards from his grandmother's shop. She used to give him damaged electronics like radios, ovens and packing boxes from the shop for him to play and experiment with.

When he was in class 8 studying at Lions Primary School in Eldoret, he built a model airplane made out of iron sheets from a worn out storage box.  Pulling the plane around and watching it almost fly ignited something in him.

The following year, upon joining form 1 at Suzy Peacock High School, he perfected his model aircraft by adding a motor from a blowdryer and some batteries to help propel it and joined the annual science congress. It only made it to the District levels but that did not deter his spirits.

While in high school, his skilled hands garnered him a lot of popularity especially with the school administration. As he pursued his studies, he kept his handy skills at work, not shying away from labour and learning to perfect his skills.

He enjoyed helping fix the school’s plumbing and electrical issues.

"If water pipes burst or the electricity short circuited I used to go and fix them. I used to be given these jobs since I was good at it," he cheerfully noted.

Initially it was voluntary work, but as time went by, the school started giving him stipends that acted as his pocket money.

“I remember once the director gave me Sh5,000 to build a modern motor/ converter for the school.” He recalls with pride shinning in his eyes.

In the third year of his high school studies, the principal inspired his second debut in the science congress where he and his team managed to get to the provincial levels.

Together with his team, they presented a dynamo and motor, which is a cheap way of producing electricity. They convert mechanical rotation into electric power using electromagnetism.

He notes that his school propelled his passion in building things and physics was his favourite subject.

Brian currently works at Ngara area in Nairobi county, where he installs and fixes sound systems in both public service vehicles and personal cars.

His first innovation after high school was a one passenger ultralight airplane that he put together using locally sourced materials.

Some of the materials he bought, others people donated to him. He used a generator engine to power it, cables from a motorbike, wheels from a bicycle and scrap metal among other things to assemble his aircraft.

He started working on it in December 2019 and by January 2020 he was almost done, having completed the construction 70 per cent and ready to unveil it to people. 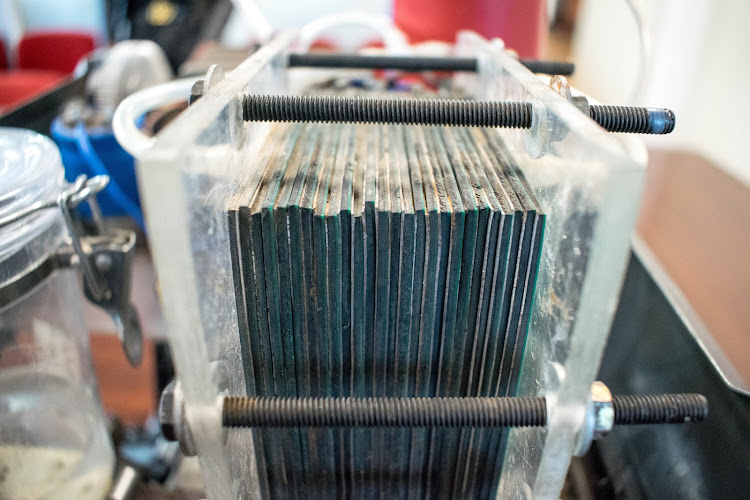 However, he did not finish up on his project as it proved to be quite expensive. More so, even though his aircraft picked speed on the runway it did not get to take off due to safety issues. And the fact that he did not have a license to fly aircraft.

Brian told the Star he got pressure because of the attention and media coverage he received after unveiling his model ultra light plane. Suddenly relatives wanted to be associated with him and friends who were not there were now glued to him.

He says he has a friends who want to tag along in everything he does even though they do not understand the projects or have any passion in the area, which is a little bit hard for him and puts constrain on the friendship.

After the aircraft, Brian still fascinated by things and driven to create decided to come up with a project that would help reduce the carbon footprint in the country. So he started working on a generator that produces electricity by using hydrogen (channeled from water) and ethanol as its primary fuel.

He got the idea to piece up the generator back in 2018 since his passion is in cars, he wanted to make something different for them that did not use petroleum or diesel to power. Thus the generator, as he hoped to have vehicles run on the it.

He saved up for seven months in order to acquire enough money to build up the prototype of his machine. He admits at first it was quite challenging as some of the materials he initially wanted to start with were not locally available.

“Some of the materials, like graphite need to be imported, I just see them online which is quite expensive,” he told the Star.

He uses the generator, whose lifespan is three years to power his electronic appliances when his hostel faces power shortages.

The machine uses ethanol and water to run the motor. The modification usually makes use of electrolysis where by there is the conversion of water to molecules of hydrogen and oxygen.

He chose to use ethanol to power his generator as its a cleaner fuel compared to petroleum and diesel. It also consumes about 30 percent less ethanol that generators consume petroleum and requires only 2 litres of water. The prototype produces 1000 watts and it is more powerful than a solar panel. 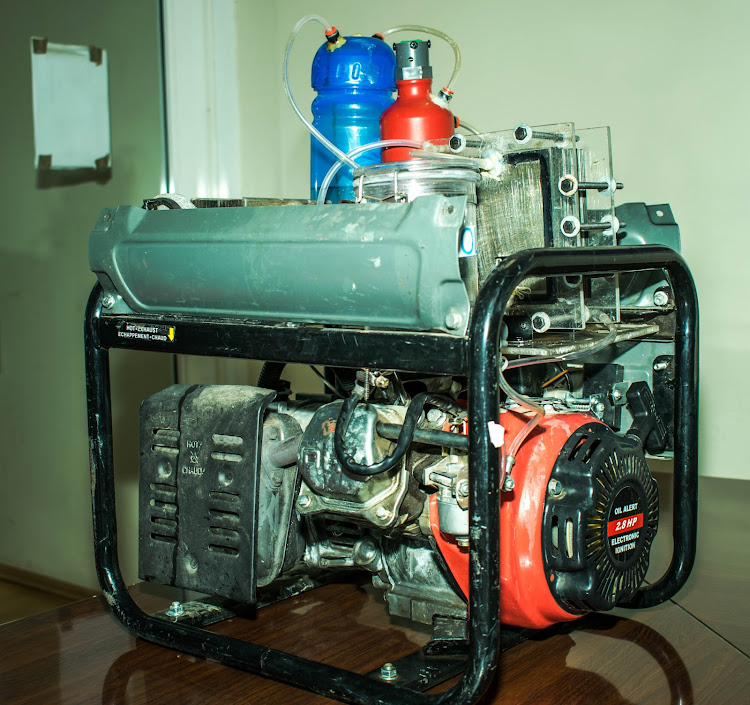 It is also not very noisy as it runs at 96db which is along the recommended noise level statue listed by the National Environment Management Authority.

The water, which he acquires at no cost, can last about 3 months before it needs to be refilled or replaced.

And a 3 litre can of ethanol costs him around Sh1,200 and lasts roughly five days depending with how often he uses the generator. Due to the cost implications, he plans to start producing his own ethanol, as the ethanol gets depleted much faster than water.

He plans on building a system that lets him produce his own ethanol from waste fruits.

“I am planning on building a system that produces ethanol from waste fruits, I’ll be fermenting the fruits then further filtrating them to produce high alcohol content. I observed lots of waste fruits dumped all over gikomba market and it gave me the idea.” He lets the Star know.

He hopes to be able to fine tune the generator, in the near future so that he can commercialize it and it can be used to power cars.

Brian hopes to be able to resume his studies next year if all goes well with his current job. After graduating he wishes to join the automotive industry and work on cars because he is really passionate about automobiles.

He advises the youth to work on what they are passionate about and not what is trending.

“Most people, look at someone's idea and want to copy it, without exploring or knowing what they really like. So you find them burning their passion to chase someone else.”

He also encourages parents to be supportive of their children, if they enjoy doing something creative. Even if it’s not making them money at the moment, he emphasizes that it is not always about the profits.