NEEDY NEXT TO WEALTHY

Westlands a land of contrasts with initiative-driven progress

• His governor ambitions are restrained by NMS takeover after Sonko, Kidero ‘failures’ 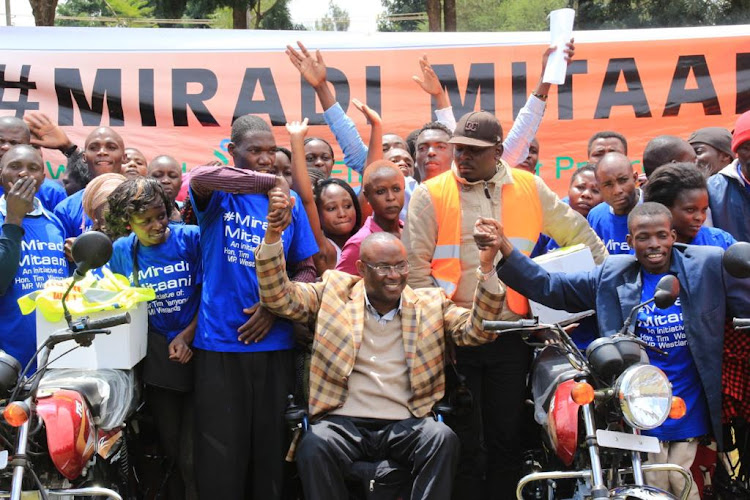 Wanyonyi gives motorcycles to his constituents under the Miradi Mtaani Initiative at a past event
Image: COURTESY

Although Westlands has some of the highest-income areas in the city, it also has many informal settlements.

Many people in these areas live from hand to mouth. Their children flock to public schools, with some entirely depending on CDF bursaries for their education.

Triumphs and tragedies of women in Kibagare slum

For several years, opinion polls by leading pollsters Infrotrak and Ipsos Synovate have ranked Westlands MP Tim Wanyonyi as the best-performing legislator among the 17 MPs in the capital.

Residents have given him the thumbs-up in transforming the education sector and economically empowering the masses.

“It is just commitment to work. When you are given an assignment, you must follow it through. Do everything necessary to deliver on the mandate you have been given,” he says.

When we arrived in his office compound for this interview, we couldn’t believe that Wanyonyi was around.

There was only one uniformed private security guard manning the gate. Inside, there were barely 10 people in the compound, with only two vehicles parked in front of the office.

This was unlike many politicians, whose constituency offices are always a beehive of activity, full of people, handlers, constituents seeking assistance and hangers-on.

Our second thought was that the MP had instructed his handlers to ensure strict adherence to the Covid-19 protocols and limit the number of people accessing the premises. 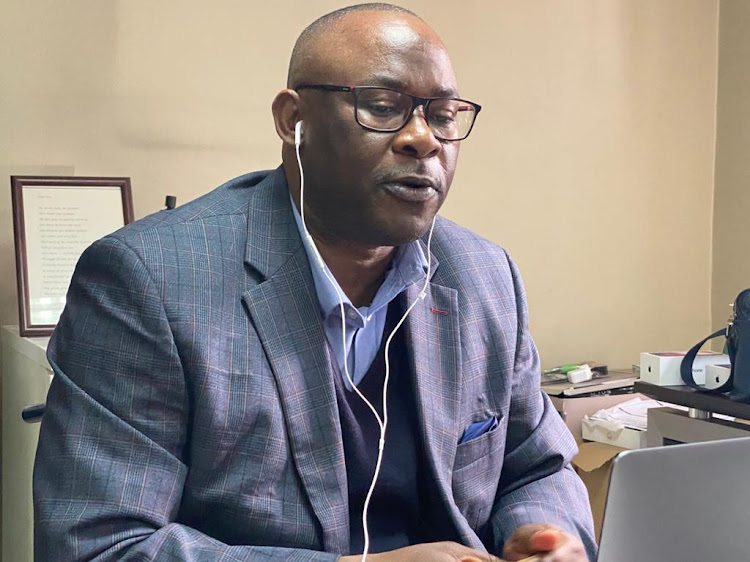 When we settled down for the interview with the second-term legislator, it dawned on us that the virus had nothing to do with the small number of people in his office.

“If you come here, you don’t see many women around here. But when I was here first as an MP, you would see many people, women and youth, outside here. But today, there are very few — only those with special issues,” Wanyonyi tells us.

Wanyonyi, the only elected MP living with disability, says his condition aside, he has been on hand to personally engage his constituents at their hour of need.

“What we [politicians] normally miss is not engaging people directly. You find proxies all over the place. When these people come, however small a matter is, they just want to talk to you directly as their Member of Parliament. That just gives them satisfaction,” he says.

In a wide-ranging interview, the ODM MP discussed the projects and programmes he initiated that have empowered his constituents and buried the culture of handouts, as well as earned him consistently high ranking among MPs in Nairobi county in terms of performance.

In an Infotrack poll in September last year, he was second only to Kibra MP Imran Okoth, who continued with the good record set by his late brother Ken Okoth.

In his first term, Wanyonyi initiated table banking and Miradi Mitaani programmes, initiatives he says have transformed many lives and made thousands of his constituents economically self-reliant.

“With table banking, we come on the table, we have money at the pool. From this pool, people can borrow. Whatever remains, it is ploughed back. It is not just borrowing, they also contribute.

“Some groups have done very well and gone very far. They have enough money to support themselves and their businesses. Many women have joined and have seen the benefits,” he says, smiling at the impact of the programme. 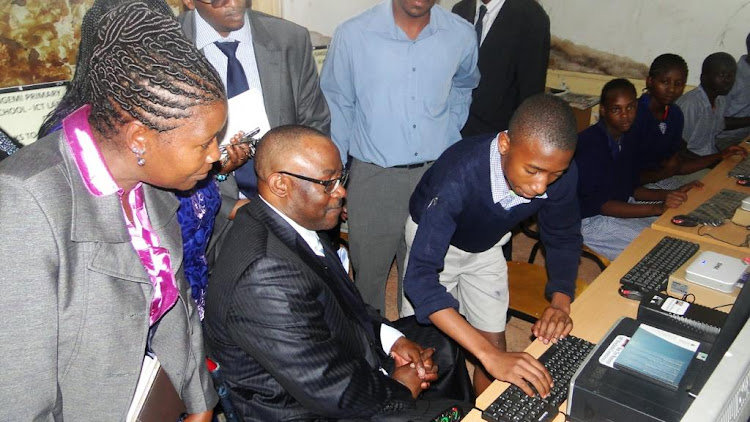 Wanyonyi during the launch of a computer lab at a school in his constituency
Image: COURTESY

It is just commitment to work. When you are given an assignment, you must follow it through. Do everything necessary to deliver on the mandate you have been given

The MP also started Mradi Mitaani, an empowerment programme where the youth make proposals on development projects they would want support on.

“We move around our villages and ask our people what they do, what they can do and what they want to do. It is not like the other one, where everyone is given a wheelbarrow,” he says, in an apparent reference to donations by Deputy President William Ruto.

“There are those who want a public address system, tents, sewing machines and many others, and we support them as CDF. They are now able to stand on their own feet.

“We have dealt with them and supported many of the youths and some have gone very far.”

Despite their impact, these two programmes are not MP Wanyonyi’s pet projects. His energy and focus have been on education.

He has improved infrastructure and built classrooms in existing classrooms and constructed at least four secondary schools from scratch.

“I have my pet project, education. I have literally refurbished and improved schools in Westlands, including constructing new ones. Building classrooms, improving infrastructure, paying school fees for children and many others,” he says.

The legislator says many youths are still grappling with drug abuse and joblessness, especially in the informal settlements in his constituency.

He decried that devolution of key functions, such as the construction of vocational training institutes, maintenance of roads streetlights and supply of water, has clipped his powers, even though his constituents call him for the services.

“We had started building some of these polytechnics but after some time, they were devolved to counties, then most of them stalled. We thought we could sponsor some of our youths who are idle to learn and at least engage in some activity,” Wanyonyi says. 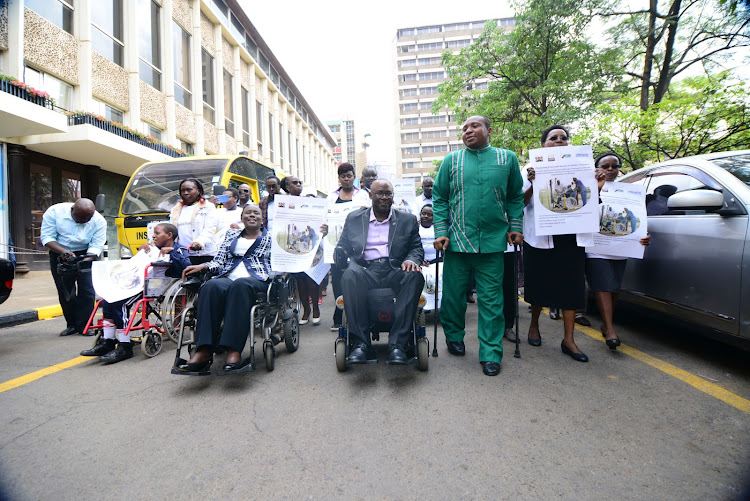 In spite of his achievements, Wanyonyi is still not sure if he will run for the highest seat in the county (governor) in the 2022 General Election.

Talks have been rife that the legislator is eyeing the coveted county top seat after successfully completing his second term as MP. ODM leader Raila Odinga even endorsed him for the seat in 2018.

“Maybe. Maybe not,” Wanyonyi says when asked whether he will run for governor.

He said his decision will depend on whether or not the Nairobi Metropolitan Services will retain the referred county functions beyond 2022.

“Before BBI came, my intention was to go for the gubernatorial seat. But still, there is some confusion about this Nairobi county. There is a proposal that those functions that were hived off from City Hall and given to NMS remain there,” he says.

“These (transferred functions) are the backbone of City Hall. If those functions are removed from the county, then Nairobi county will just be a shell with no real revenue.

“So, unless these functions are returned to the county, then it is better you serve as a Member of Parliament than go to City Hall and waste yourself or you don’t have anything to do.”

The MP appeared to blame former governors Mike Sonko and Evans Kidero for the takeover of the Nairobi functions, arguing that the two did not have a clue on how to transform the capital.

He said Sonko himself invited the President to take over the county roles after he decried cartels that had taken the city hostage.

“Sonko and his group, when he went to City Hall, he had no idea how he was going to manage the place and completely could not understand and had no capacity to deliver,” he said.

He said Sonko’s failures stemmed from pioneer Governor Kidero, who, despite having a ‘golden’ opportunity to transform City Hall, failed to do so.

“The person who had the best opportunity to change City Hall was Kidero because that was a new order that was coming in as a county,” he said.

“But he maintained the same rotten team there. So, Sonko as much as he failed, he also just followed what Kidero had done.”

Sonko and Kidero have in the past dismissed the failure accusations and gone ahead to list successes during their tenure.

But the Westlands MP dismissed him.

“My politics is in the city. I have no intention of vying for the Bungoma governor’s seat. Ignore those spreading lies over my ambitions,” he said.

I don't talk politics with my brother Wetang'ula – Tim Wanyonyi

MPi speaks of his journey in politics, including prospects of being Nairobi governor.
News
1 year ago
Endless plea of constituency with not even inch of tarmac
by JULIUS OTIENO Political Reporter
Big Read
12 April 2021 - 04:00