MP: Luhya unity will be achieved in 2022 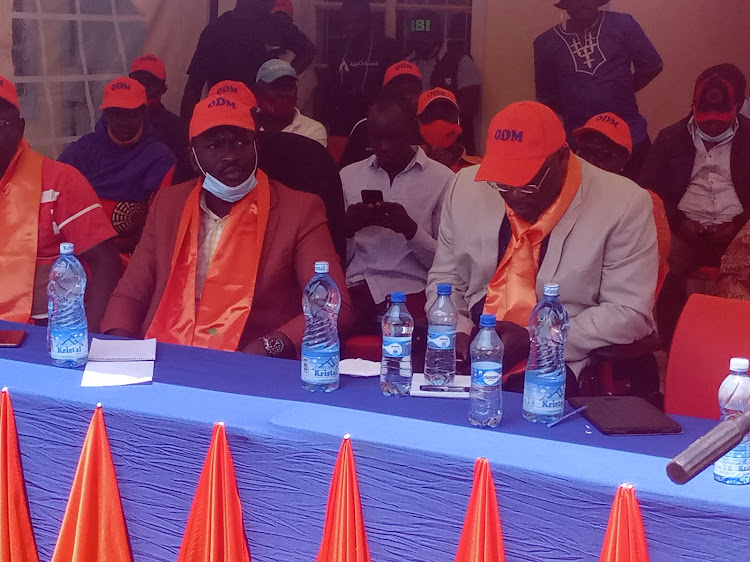 Westlands MP Tim Wanyonyi says behind-the-scenes negotiations are ongoing to pick a person who will 'carry the aspirations' of the Luhya nation in 2022.

The legislator said the region is working to consolidate its votes behind one leader to give them a headstart in the presidential race.

“Negotiations are ongoing and we are going to settle down on one of them. If Luhyas can manage to vote as a bloc, nobody will block us. They will come on the table,” he said during an interview with the Star.

The ODM MP regretted that for years, ‘outsiders’ have taken advantage of the ‘liberal Luhyas’ to divide the region, denying them a chance to ascend to the presidency.

“This Luhyas unity talk is created by people who are not Luhyas. Luhyas are very liberal. When it comes to voting, they vote independently,” he said.

“What we have learnt is that people take advantage, everyone wants to get a share of the Luhya vote.”

Mudavadi and Wetangula, both principals in the One Kenya Alliance that also brings on board Kalonzo Musyoka and Gideon Moi, have expressed interest to run for the country’s top seat.

Former Unctad secretary general Mukhisa Kituyi, who hails from Wetangula’s home county of Bungoma, has also declared he will vie for the seat.

Wanyonyi gave a scenario of Mt Kenya which, though it has fielded various candidates for President in the previous elections, always rallied behind one person at the ballot.

“And that is what we need. We just need one leader who will stand out, and every Luhya says that is the person who will fly our flag,” he said.

During the interview, Wanyonyi, who is serving his second term as MP, implored politicians to delink the Building Bridges Initiative from politics.

He termed BBI a lifeline opportunity to change the way things have always been done in the country.

“If we remove politics from BBI, BBI is something that is presenting us a lifeline. It is going to change the way things are done in Kenya so that we don’t do the same thing the same way every day and then we expect different results,” he said.

He said the initiative will usher in a new era of inclusivity, equality and bring much-needed reforms at the electoral agency.

“Let’s not pretend that this Constitution doesn’t have issues. It has issues. There are some Articles in that Constitution that we cannot implement," he said.

“Even if they stay there for a 100 years, we will not implement them. So we better change them now.”

Wanyonyi challenged those opposed to the BBI to propose better ways of improving the bill instead of opposing the entire initiative.

He said the party may opt for negotiations and harmonisation to pick a presidential candidate.

“I know [the former] Prime Minister [Raila Odinga], in our party there are people who are running against him, but eventually, he will be our party candidate,” Wanyonyi said.

“In the end, some of these things, the best democracy is negotiated democracy. Once you reach somewhere, you may sit down and agree.”

He said the party has put on hold its grassroots elections because of the BBI and the upcoming referendum.

The MP said conducting the elections now could cause disharmony and fallout within the party, a situation the party honchos are keen to avoid.

“Party elections, we have only delayed it because if we start doing it now, we will start getting into problems with issues on BBI. We don’t want a fallout. If we go to primaries now, people will be jittery,” he said.

He told the Star the party is currently putting infrastructure and plans in place for the next year’s polls, adding that the outfit will form an alliance with other like-minded parties after the BBI referendum.

“As a party, we are looking at how, once the BBI is done, we can realign ourselves, and we may even end up in a coalition, you never know,” he said.