How a chance encounter with Uhuru helped girl finish school

• He has 550 scholars sponsored under the Kenyatta Trust, a nonprofit organisation 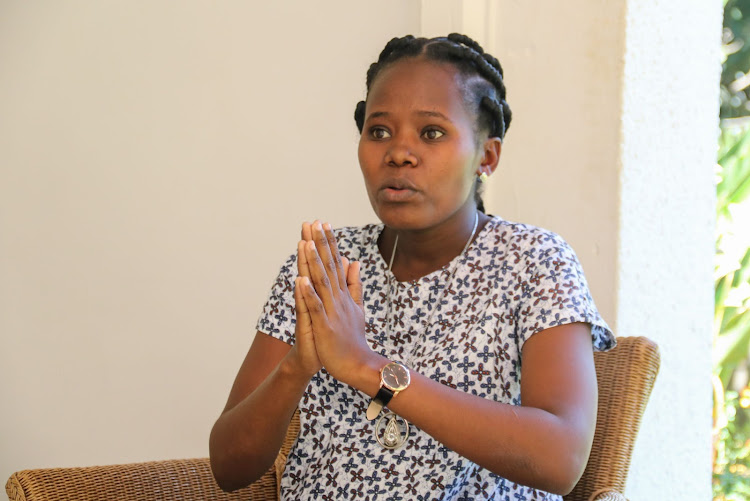 Kenyatta Trust beneficiary Lilian Gacheri during an interview with the Star on March 11 at the Trust headquarters in Lavington, Nairobi
Image: WILFRED NYANGARESI

Lilian Gacheri was on the brink of dropping out of school when she met a new ‘father’, President Uhuru Kenyatta.

Uhuru, who was holding a rally in Chuka town, had singled out Gacheri, identifying her from the crowd by the school uniform she was still wearing.

“I was picked from the crowd by the same security guards who had pushed me away initially. His Excellency asked me to go back to school but I thought it was the usual empty political promises,” Gacheri recalled.

“I went to school anyway only to find my school fees paid in full.”

It was a Friday in 2013 and Gacheri had only three days to settle more than Sh60,000 that was needed for her to be allowed to sit the end-of-year examination in Form 3.

She had been sent home on Wednesday the same week and had gotten nothing but Sh7,000 bursary from her Constituency Development Fund. It was too little to make a difference to the three years’ school fees arrears she had accrued.

Before the rally, Gacheri, now 26, had exhausted all the options for getting her school fees and had resigned to fate.

Between her and poverty was Sh400, which she was yet to decide if it should go towards bus fare or food.

When Gacheri got to her home in Tharaka Nithi, she was welcomed with a loud silence. She left to go ask the whereabouts of her family from her stepmother, who lived nearby. It turned out her mother had left to stay with her cousin in Mbeere.

“My father told me I was a big girl and should get married. When I tried pleading with him to pay my fees, my stepmother chased me away,” she said.

Gacheri spent the night outside their house, waiting for dawn to start a 68km journey on foot to find her mother, whom she knew too well could not afford her school fees.

“I woke up at 3am and left for Mbeere on foot. I travelled all day and like I had expected, my mother had no money, but she offered to take me to Chuka Children’s Office, when we met Uhuru at the rally,” she said.

Gacheri said she was very surprised when Uhuru got back into the car and signalled his security to bring her to him.

“After I explained my predicament to him, he wrote down my details and put the piece of paper in his shirt pocket, and asked me to report to school immediately. I sneaked back to school on that Monday night, sure that the promise to pay my fees was empty,” she said.

The next morning, the headteacher informed Gacheri that her school fees had been paid and that she had been enrolled in The Kenyatta Trust.

“School fees was never a concern any more until I finished my degree in psychology in 2018,” she said, smiling. 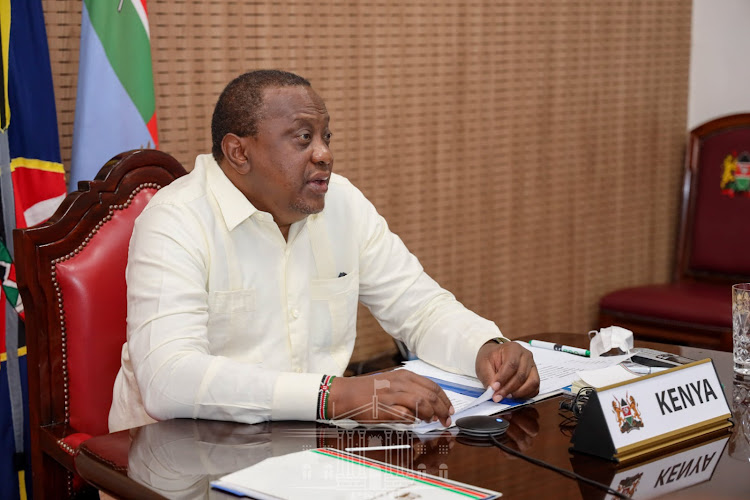 After I explained my predicament to him, he wrote down my details and put the piece of paper in his shirt pocket, and asked me to report to school immediately

Gacheri is just but one of the more than 550 ‘sons and daughters’ of Uhuru sponsored under The Kenyatta Trust along with the famous President’s son Daniel Owira, alias Otonglo.

Moses Etoot, the lastborn in a family of four from Lotgoyo, Turkana, is a petroleum engineering student in China.

His story is similar to many of the students under The Kenyatta Trus,t who have pushed themselves beyond the limit to achieve greatness in education.

After emerging the second top student in Turkana after standard 8, Etoot began the struggle to raise school fees, hoping to join Bungoma High School. For a year, he remained out of school.

Door-to-door fundraising only got him Sh6,000 out of the required Sh50,000 school fees. The amount would only be enough to take him to school.

“My mother sells charcoal to fend for us after my father was killed by bandits during a cattle raid. So I approached a priest for help after my efforts seeking sponsorship bore no fruits,” he said.

Armed with a metal box with nothing but a Bible inside, Etoot reported at St Leo in Kakuma, a Catholic School that the priest had volunteered to take him to.

“The headteacher was surprised to see me report late and alone. I told him I was my own parent but after sharing my story, he admitted me,” he recounted.

Three weeks later, a lady he had met while sourcing for sponsors called his primary school to inform him of the chance to join The Kenyatta Trust.

“I could not even wait for lunch after I was told that I would join my dream school, Bungoma High School,” he said.

Etoot is now a mentor back in his village, having overcome the constant push for him to marry and stop ‘wasting’ money on education.

Gerald Njoroge, 21, had made a pass on education before he had an epiphany that got him to change his mind.

As a child, he had lived on the streets in Nakuru for many months.

“I hated the strictness of my guardian, so I fled and became a street boy, until one morning I woke up convinced that that was not the life I desired,” he said.

He was in Class 4 when he joined the streets and enjoyed the small perks he received despite facing regular beating and sleeping under deplorable conditions.

“We would sleep under culverts then suddenly in the middle of the night, the rain would wash you out. Sometimes, the older boys would pee on us, and members of the public who constantly view street people as a security threat would beat us for no reason,” he said.

“However, when the older boys gave me ‘manly’ responsibilities, like selling things for them and they would reward me with Sh5 for the work, I thought nothing else could be better.”

Even after returning home and finishing his KCPE, Njoroge had to stay home due to lack of school fees.

“My father had died and my depressed mother sank into alcoholism, leaving everyone to fend for themselves. My sisters got married except the youngest. I was determined to excel,” he said.

Through his headteacher, Njoroge found out about The Kenyatta Trust and was sponsored to Nyahururu Boys, where he finished before joining Kenyatta University, where he is currently pursuing a degree in IT. 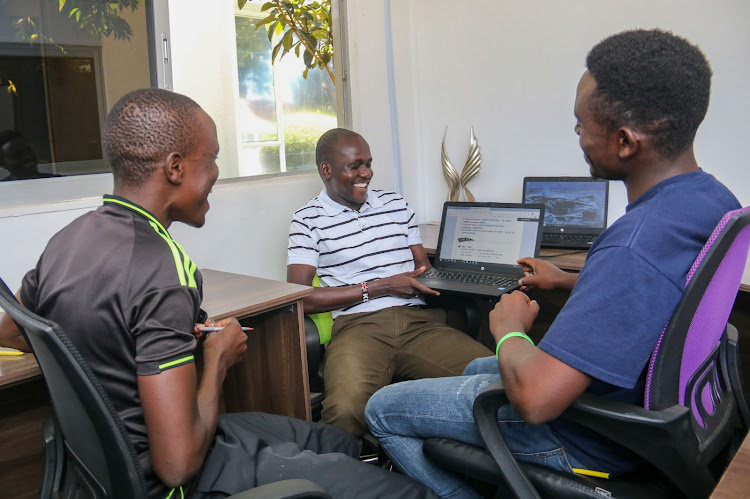 HOPE TO THE DESPERATE

Flickson Emathe from Isiolo and his brother had to choose who between them would join high school. Their uncle who was taking care of them since they were orphaned, could not afford to pay for both of them.

Even though he had scored higher marks, he let his elder brother take the chance to save him from shame and mockery from his peers.

Emathe had to do odd jobs to help raise school fees for his elder brother until the second year of his studies, when his brother advised him to join school as well.

“I went back to class 8 and emerged third, which surprised many people. The high school I was enrolled in was Muslim-dominated while I am a Christian. I could see they were not happy to have me,” he said.

Emathe was taken by the Kenyatta Trust when he was in Form 1. He was among the three top students who had been picked to represent the school in State House. While there, he shared his story, and that is how he received the sponsorship.

Emathe said he was expelled while in Form 4 on accusations of arson when he was in fact the victim of the crime.

“The students wanted me dead and had formed an alliance for the same. It was by sheer luck that one of them informed me of the plan and so I sneaked out that night,” he said.

“My dormitory was burned and I was accused of the crime and the headteacher declined to readmit me despite a court order stating the same. Seven people were convicted.”

He continued to study from home awaiting the national examinations, KCSE. He went back to do the exam as a day scholar, where he scored a D+. He has been enrolled for an IT course as he awaits to join the military.

“I did not perform according to my standards. Still, I am grateful for the opportunity and hope to actualise my dream of joining the military.”

The Kenyatta Trust is a nonprofit organisation dedicated to transforming lives through education, one family at a time.

The prime beneficiaries are students from across all 47 counties, who come from underprivileged family backgrounds.

It adopts a holistic approach in the transformation of the lives of underprivileged communities in Kenya through a combination of education, mentorship, counselling, community service and economic empowerment.

“We have occasionally selected more than one scholar per county sometimes when there is a dire need, but the target is one scholar. We sponsor them fully and they are supported until they are married and stable,” said Mwende Mbevi, Trust.

Mbevi said the families of those scholars taken in are also economically empowered to take care of their families under The Trust’s Inuka Economic Empowerment Programme.

This programme seeks to bring together the parents of The Kenyatta Trust scholars with members of their community to ensure they register as a self-help group in their local subcounty office.

The groups are encouraged to start saving small amounts of money together and put this towards an income-generating project that they feel best suits them.

To expand their projects, the groups are offered capacity-building training through local partners and an interest-free loan to enable them to increase their profits.

"To date, the Inuka programme has positively impacted 1,664 families across the country, and it is our hope to include an additional 2,500 families as the programme continues to grow,” programme head Kirigo Ndegwa said.

Some cannot even spell their names or do simple math
News
1 year ago
How Kenya creates pregnant ‘Kadogos’
by AKELLO ODENYO AND NURU SOUD
Big Read
05 April 2021 - 05:00