Introduced in 1973 to rehabilitate quarries and later to green arid areas, it has become a nightmare to residents and their livestock

• The weed grows like wildfire in arid areas, with a new plant maturing in six months

• Residents are getting maimed by its thorns, while its sugary pods are killing livestock 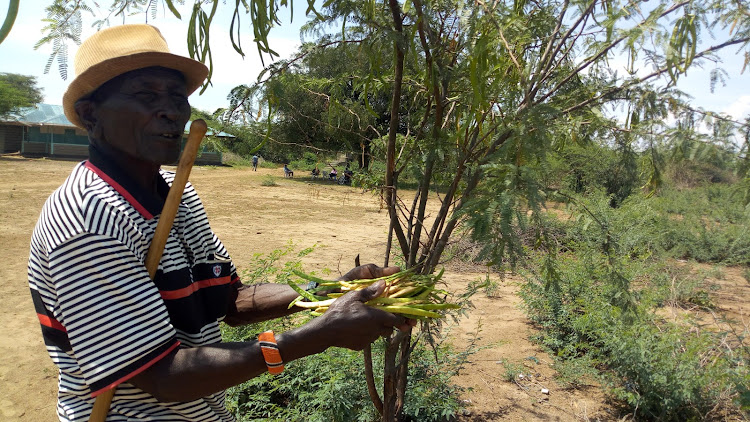 Ilchamus elder Letekai Leboya, 70, watches helplessly as the painful wound at the ankle of his right leg worsens every day.

He was pricked by the thorn of an exotic poisonous wooden plant known as prosopis juliflora (mathenge) while working on his farm five years ago.

“The piercing pain denies me sleep at night and I can’t walk long distance during the day,” Leboya said.

The victim is a resident of the remote Sintaan village in Marigat, Baringo South subcounty. His worries doubled when the leg got swollen and developed some pus. He even thought it would finally be amputated.

“I thought the pain would disappear immediately but instead, it earned me a cool five years of trouble,” Leboya said.

He says the stubborn wound refuses to heal, despite the efforts he made to visit several hospitals to seek treatment.

The jobless peasant farmer now resorts to local herbalists to nurse the wound at home as he lacks the cash to go to the hospital for routine checkup.

Seated next to him is another victim Mary Leweri, who cannot work on her farm again since the noxious thorn of the mathenge weed pricked her hand 10 years ago.

She got healed after several visits to the health facility but unfortunately, the middle finger of her right hand has disfigured and malfunctioned.

And Martha Kibilion, 63, battles the pains of her swollen and rotting foot after she was pricked more than 20 years ago.

The evergreen weed was introduced in Kenya from Brazil in 1973 for the rehabilitation of quarries in Mombasa by Bamburi Cement. It was later introduced in Baringo, Tana and Pokot areas to serve as a wind breaker, stop erosion, curb desertification and tame wood shortage.

However, the fast-growing vegetation now covers an area of 50km sq in Baringo South, with 13 villages affected. 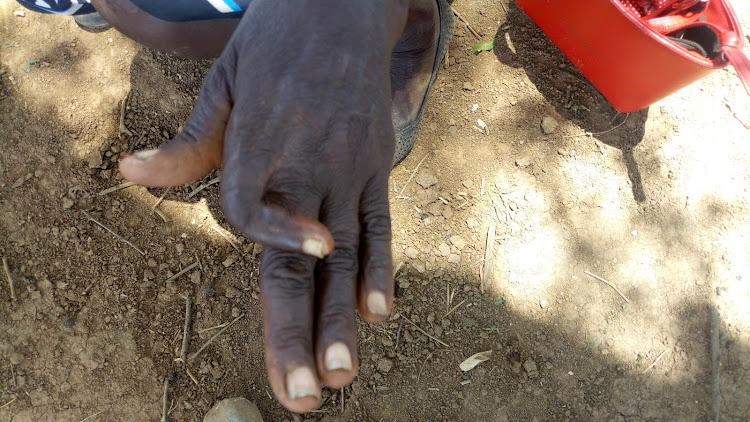 Initially, it helped eradicate the aridity cover and acted as a good windbreaker. But today, the weed tends to pose more harm than good

“Livestock waste and floodwater dispose of the tree pods, spreading them to grow faster. A new mathenge plant matures in as short as six months,” Mzee Ezekiel Parteneu said.

Ilchamus woman Nongera Lelimo, 60, added that initially, the government’s idea to introduce the weed was good.

“It helped eradicate the aridity cover and acted as a good windbreaker. But today, the weed tends to pose more harm than good,”Lelimo said.

She said as a community, they have lost many cows and goats as a result of the weed.

For instance, herder John Ole’ Saningo, 60, watches helplessly as his toothless cow struggles to chew the gut while just waiting for its time to die. Animals lose their teeth after chewing the plant's sugary pods, which erode the enamel.

Saningo's cow has never risen to walk again since it collapsed and lay down two weeks ago. In his hand, Mzee Saningo holds pieces of sugary prosopis pods he claims his animal ate before losing its teeth due to intensive decay.

“There is no single medicine I haven’t tried, hoping to heal my sick cow. I have tried everything but it will definitely die,” Saningo said.

The cow lies down outside the old man’s Manyatta in Sintaan village, Baringo South.

Saningo said the cow gets weak and emaciated daily and it no longer gets up to accompany the rest of the herd to the distant grazing fields.

This forces Mzee Saningo to walk around his farm every morning to gather some natural fodder leaves and grass to feed the deteriorating animal.

Worse still, the dying cow has a three-week old breastfeeding calf, whose hunger and appetite to suckle is becoming a nightmare.

“As you can see, she desperately licks the white foam oozing down from its sick mother’s toothless mouth, hoping it could turn out to be milk,” Saning’o said.

Like other locals, he has lost his over 100 toothless animals due to starvation. “I had some 200 head of cows but I’m hardly remaining with 10 currently,” he said. 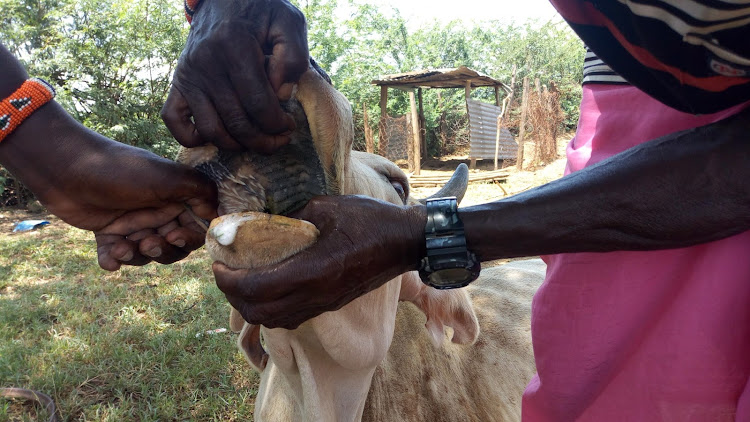 In 2006, some members of the Ilchamus community moved to court to challenge the government for letting the obnoxious weed keep growing.

They won the case but since then, nothing has been done to compensate the affected victims or destroy the notorious shrub.

Joel Lokeroito, who is the area Charcoal Burning Association chairman, said the government earlier had a good idea of introducing charcoal burning to eradicate the weed.

“With our over 60 groups, we were already making millions of shillings with the sale of quality charcoal out of prosopis tree,” Lokeroito said.

He said the deal collapsed when the government announced a moratorium on charcoal burning in all Kenyan forests two years ago.

The largely pastoral community would wish to turn to farming, growing pasture, sugarcane and fruits, such as bananas and mangoes.

Murda irrigation scheme chairman Dickson Lekesio blamed the weed for exacerbating flooding. “In April, floods swept our plantations, and although it was a natural disaster, the weed played a major role,” he said.

“The weed has interfered with waterways, diverting the course of some rivers onto farms. It has grown on roads not frequently used.”

The farmers, who supply seeds to Kenya Seeds Company, are now at a loss as the weed spreads. To reclaim land that has been covered by the weed, one requires up to Sh50,000 per acre.

“But the weed still resurfaces because it is spread by goats that feed on the pods and excrete, further dispersing it,” Lekesio said.

“We would wish the government reconsiders prosopis for charcoal burning since it is the only method we can use to control its evolution,” he said.

Researcher Abdalla Kisiwa said prosopis, being a woody weed, can also be utilised as firewood and to make furniture and poles.

“In Turkana, prosopis is the main source of fuelwood, especially in Dadaab refugee camp. It is also used for construction, and that is why it is viewed differently,” Kisiwa said.

In 2014, a foreign investor tried to set up a multi-million-shilling Cummins Cogeneration industry to make use of the weed to generate electricity power, but it closed shop immediately due to logistical hitches.

Baringo Governor Stanley Kiptis endorses clearing of the weed, citing its harmful effects to the community. “We have lost many of our people due to floods caused mainly by the blocked rivers in the lower parts of Marigat,” he said.

In 2018, Environment CS Keriako Tobiko opposed the clearing of the prosopis bush cover.

He said the national government, in collaboration with the affected counties, is looking for possible ways to put the weed to good use.