Cereal had nearly disappeared from the menus of many households at one point. 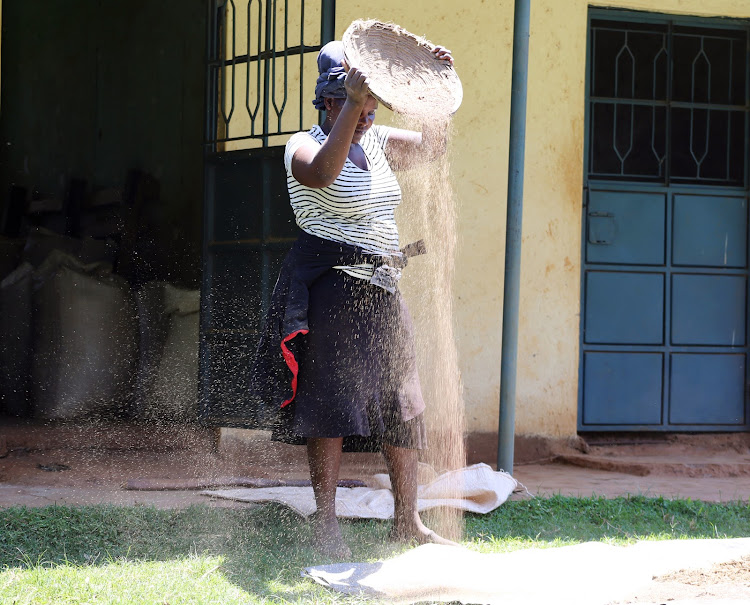 Gladys Kemunto began cultivating finger millet (wimbi) in 2018 after a friend told her about the crop. The friend had bought seeds from the Kenya Agricultural and Livestock Research Organization centre in Kisii.

Kemunto went to the centre and bought one kilogramme of seeds for Sh100.

She sowed the seeds in a quarter of an acre of her one-and-a-half-acres and reaped big. “My first harvest yielded four sacks,” she says.

She decided to give it another try. However, the weather failed her, there was no rain. “The second yield dropped because of a dry spell. I reaped only one and a half sacks,” she says.

To the single mother of two, 'seed was seed'. “When I first planted the millet I thought any could do,” she says. However, when she went back to Kalro, she received expert advice on the kind of seed to plant and when.

Kemunto evaluated the information she had received and the range of available improved finger millet seeds. The U15, also known as Maridadi, was her choice. This type resembles a fist as it matures is dark brown in colour. Kemunto likes its colour. She also likes the fact that this type takes about three and a half months to mature.

Kalro has been at the forefront in developing seeds for a wide range of agro-ecological environments through the Kenya Climate Smart Agricultural Project. The director of the Kisii Kalro Food Research Centre, Dr Chrispus Oduori, is a plant breeder.

He says plant breeding entails the development of improved varieties meant to boost production of food crops. He has been breeding finger millet for close to 30 years.

At the time that he ventured into finger millet breeding, he recalls, there were no breeders interested in the crop. The cereal was disappearing from the menus of many households.

“I felt that it was important to revive or to relook at this cereal with the objective of getting farmers to be interested in it and multiply it so that it can serve the various good purposes it used to serve previously,” says Oduori.

Different techniques are applied in plant breeding. One of them involves “looking at the germplasm that we have in different crops, selecting the correct one for different areas and if you cannot find [what you're looking for] in the germplasm that you get then you look at hybridisation,” says the scientist.

Germplasm is living tissue from which new plants can be grown. It could be a seed or the part of a plant such as a leaf, stem, pollen or even just a few cells. This tissue contains the information for a species’ genetic makeup. The tissue serves as a valuable natural resource of plant diversity.

Dr Oduori has released six finger millet varieties. He has named some of them under the umbrella 'Kak Wimbi series'. Kak stands for Kakamega. Dr Oduori settled on the name as he was working at the Kalro centre in Kakamega at the time.

For the Kak Wimbi one variety, “we got the germplasm from Nepal,” he says. “A uniform population of it that was extensively adapted was realised and this was put in the National Performance trials where it out-yielded the stipulated checks.”

The variety was released through the National Performance Trials and the National Release Committee under the Kenya Plant and Health Inspectorate Services. “It is a very well adapted highland variety and it yields quite well,” the scientist says.

In plant breeding, the breeder may also examine parent plants with different characteristics. The plants are then married. “You get the offspring and select from those offspring the desired plant types for different agricultural production and environments,” Oduori says. 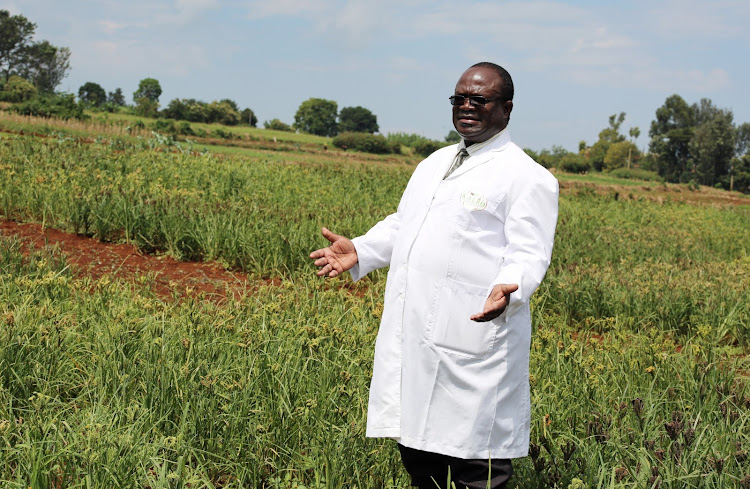 Scientist and plant breeder Dr Chrispus Oduori at the Kalro trial farm in Kisii, where improved millet varieties are cultivated to assess the kind that is most ideal for the region.
Image: COURTESY

The exercise combines “conventional breeding with a mix of genetics and mark assisted selection where we use the DNA,” he says. “We explore the DNAs of different variants in species to come up with the right genetic combinations that meet the requirements for a given environment.”

For Kemunto, what went into the development of the seed that’s ideal for her environment may be too complicated for her to understand. All she desired was seed that could provide her with enough to sustain her family and possibly make some financial returns.

“Since I was advised on what to do, my proceeds are good,” she says.

The one kilogramme of seeds that she acquired for Sh100 consumed 10kg of fertiliser at a cost of Sh540. She spent about Sh1,400 on her labourers. “At harvest, I got four sacks which I sold for Sh8,000 each,” she says.

She realised nearly Sh30,000 in profits.

The one kilogramme of seeds that she acquired for Sh100 consumed 10kg of fertiliser at a cost of Sh540. She spent about Sh1,400 on her labourers. “At harvest, I got four sacks which I sold for Sh8,000 each,” she says. She realised nearly Sh30,000 in profits.

Breeders examine the difficulties of cultivating varieties and these are addressed with the objective of optimising productivity. To generate improved varieties of finger millet, some impediments were encountered but they were not insurmountable.

“Because of the disinterest in finger millet at one time, the genetic base had been eroded so much that we had only local varieties that were poor in production among the farmers,” Dr Oduori says. Germplasm from several regions was collected and screened in observation nurseries.

“Good germplasm was identified and this could either be directly transferred to farmers because they were better than what farmers were using at that time or we had to identify those with good qualities as parents in the making of crosses to get better performing varieties,” he says.

The alternative route to breeding a viable seed is to identify two varieties with desirable traits, explains Oduori. “These are crossed and then you select those that carry the traits of both the parents. In most cases, you come up with better performing varieties.” If these go through the Kephis release system, they are cleared to the public.

Oduori cites Kak Wimbi three as an example of a variety that was released through this mechanism. He says it’s very well adapted and is one of those dotting various trial farms in Embomos and Kapsaos in Bomet and Kericho counties. “The seed performs well both in lowlands and highlands,” the breeder says. Bomet is a highland area. 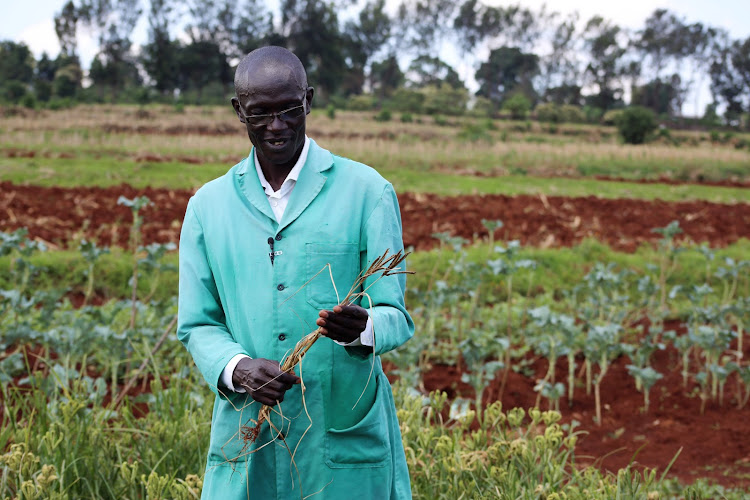 Kalro research technician Isaac Masoka holds a finger millet stalk infected with neck blast disease. The neck and the head of the stalk dry and no grains are formed.
Image: COURTESY

Each of the six varieties that Dr Oduori has released had to undergo a rigorous process before being availed to serve either as seed for multiplication or for food crop cultivation.

The Maridadi variety that Kemunto has been growing is a product of early breeding activities between Serere Research Institute in Uganda and the East African Research Organization. “We acquired that germplasm, put it under Kenyan circumstances or environment and eventually released it.”

“When we’re developing varieties, we put the germplasm that we come up with, in the different environments that are affected by climate change,” Oduori says. “We put varieties in very extensive environments; in Kisii, Kakamega, Alupe, Rift Valley and other areas so that we get a feel of how each variety performs in each environment; dry, wet, etc.”

Going for one specific adaptation of finger millet is not advisable since the crop is relatively new in research. “You go for wide adaptation. That means that if you took it to different environments, it will still perform,” says the breeder.

Beside unpredictable rain patterns, Kemunto would also contend with neck blast disease. Her harvests would be poor since almost her entire crop would be infected.

“In Kisii we call it egetabo,” she says. Regarding her new seed, she says “This one is not affected.” Kemunto grows other crops on her farm. “Millet performs better than all the other crops,” she says.

Kalro agronomist and soil scientist Dr Rachel Opole says the Maridadi variety is quite resistant to neck-blast disease. This disease causes the crop’s head to dry and as as a result, no grain develops.

One of the headaches experienced in the cultivation of finger millet is weeds. “Apart from the broad-leaved weeds, we have another variety that looks exactly like finger millet,” Dr Opole says. “It is wild finger millet. It takes away all the nutrients from finger millet and so the yield is depressed.”

Weeding may be tricky since real millet may be plucked from the soil while retaining the look-alike invader.

The closed-fist look of the U15 secures most of its grain from birds, unlike other varieties that expose the grain.

Kemunto prefers porridge made from finger millet. For her ugali, she mixes millet flour with maize or cassava flour.

“Finger millet has helped me to pay school fees for my children and I’ll continue cultivating it.”