Mohamud Abass, an ordinary Kenyan with a golden heart

After his own childhood struggles, he has spearheaded campaigns to help in health and education of the poor in Wajir

• Abass heads Afya Mashinani, which seeks to offer health cover to the poor in Wajir 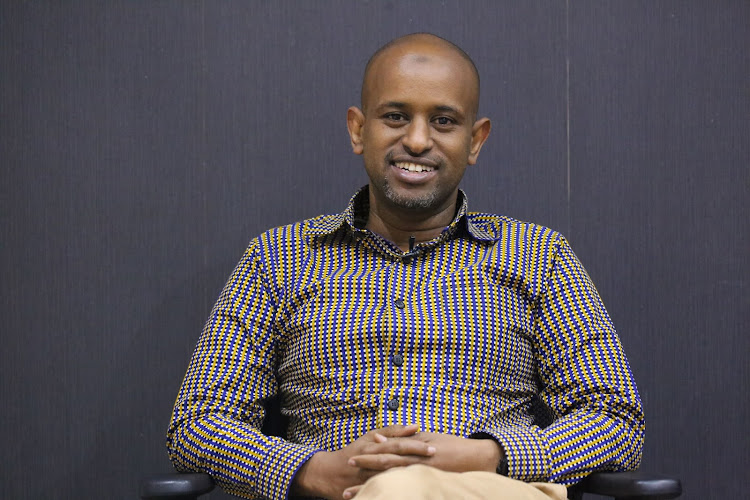 "You don't need wings to be an angel. You just need a heart of gold."

Mohamud Abass, 43, who has helped to fundraise millions in medical aid for tens of destitute families in Kenya, seems to live by this mantra of Anthony Hincks’.

Armed with love and desire to leave the world a better place, the man who, at a tender age, got used to sharing oasis water with domestic and wild animals, has now embarked on the ambitious journey to secure medical cover for at least 300 families in his home county of Wajir.

“I have for the past decade helped fundraise medical costs for extremely poor families. How long will I keep asking friends to chip in whenever a case arises? The idea of medical cover is quite feasible and sustainable," Abass said.

Born in October 1978 in the dusty and remote small town of Wajir, Abass was raised in a very populous home, where his influential father occasionally slaughtered a goat just for the day’s meal.

Word has it his late father raised at least 300 children, paying school fees for bright but needy students within the larger Northeastern region, some of whom are now prominent leaders in the country.

“I had a very strong father, a businessman, and an extremely compassionate mother. They taught us sharing and honesty, values that have shaped my life," the ever-smiling Abass said.

Growing up, he experienced normal hardships just like other children in a semi-arid area. He attended Tarbaj Primary School, a day and boarding school where he used to walk two to three kilometres to get drinking water from a dam.

He remembers with nostalgia how, when at aged 10, he would drink from the source, quench his thirst and walk back to school.

“I was young and stupid. It never hit me that I needed to carry some of the water in a container just in case I felt thirsty again. All I needed was to drink at the source and by the time I reach school, I'm thirsty again," the humanitarian recalled with laughter.

The situation is yet to change more than 40 years later as locals still depend on dams, shared between domestic and wild animals, for drinking and other household uses.

“Every time I go back to that village, I break down and cry. I remember my childhood and see people still living in abject poverty. It pains my heart," Abass said, fighting back tears.

His childhood life became unbearable when, just after he'd sat his elementary exams, his father died.

Endless plea of constituency with not even inch of tarmac

How long will I keep asking friends to chip in whenever a case arises? The idea of medical cover is quite feasible and sustainable

"Things changed for the worse after my father's death. Two meals a day was now a luxury. Income from the few properties left by my father is what saw me through high school," Abass said.

Daily socioeconomic hardship induced a soft spot in him for the less fortunate in the community.

Immediately after clearing high school, he joined the Kenya Red Cross as a volunteer. His first assignment was during the Bagalla massacre in October 1998 (not to be confused with the 1984 Wagalla massacre).

They allegedly targeted members of the Degodia community in a manner akin to genocide. Many people were killed, girls kidnapped, families displaced and animals stolen.

While on duty, Abass came across a malnourished boy whose family had been displaced. He empathised with the family and committed to be giving them his daily stipend to buy food, with the hope of saving the child.

"I was more than an orphan myself. Having lost my dad, who was the sole breadwinner in our family, I could imagine what this family was going through," he said.

He did that for three consecutive days, sharing the little daily wages with them even after the unfortunate death of the sickly boy.

The experience opened him to humanitarian life. Even though he worked briefly as a taxi driver, wheat farmer in Narok and a human resource manager at the Kenya Meat Commission, his heart was in the humanitarian world.

He has since worked variously as a human resource and project leader for global humanitarian agencies, including Doctors Beyond Borders and the International Rescue Committee in multiple countries in Africa and in Asia.

Even though he was in gainful employment, his heart was home.

For 30 years, the charity has helped the desperate find new meaning in life
News
3 years ago

For instance, in 2016, he led a social media campaign to raise funds for a boy who had a rare skin disease after seeing the photo in a WhatsApp group.

The boy was extremely weak, forcing the mother to lock him in a house for almost 10 years to avoid public ridicule.

"I was really touched. I mobilised friends using #SaveBabyAbshir on social media platforms, and we managed to raise Sh2 million. The genetic condition is being managed," Abass said.

The child got help and the mother was taught how to deal with the condition.

The awareness created made many families come out, forcing the county government to respond by equipping local health centres with drugs and introduce a treatment programme for the condition. 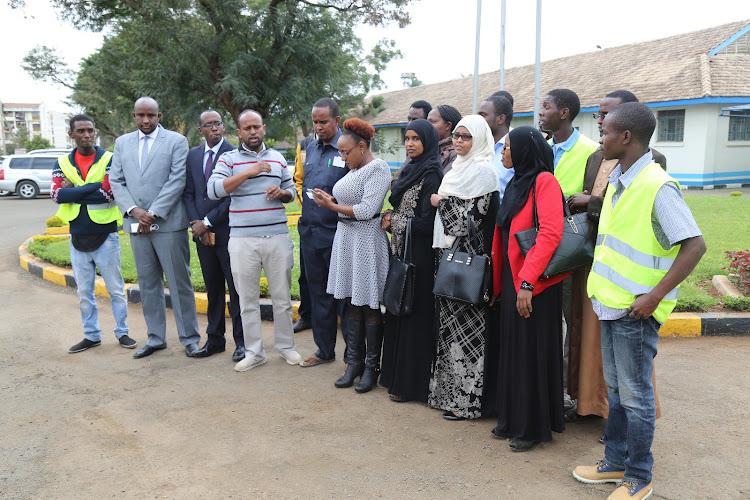 Abass (in striped shirt) with other well-wishers at KNH to receive baby Abshir who had a rare skin disease
Image: COURTESY

The success of the first initiative motivated him. He has never looked back ever since.

He was the driving force behind the medical appeal to save baby Nasra from Garissa, who had a heart condition that required Sh2.5 million, which his poor parents could not raise.

Through social media hashtags #GiveMeAHeart and #SaveBabyNasra, the campaign raised Sh3 million, which helped the child go to India for surgery. Unfortunately, he died on the operating table.

"This was another depressing moment for me," he said.

The other one was the dusitD2 terrorism attack in Nairobi in January last year, where two of his friends perished.

He led a social media campaign that raised Sh22 million thanks to the support of leaders and friends.

He has since led many such campaigns, with the latest one being 3KidneyForBabyHanis. The orphan, whose father died recently of throat cancer, requires urgent transplant.

"We campaigned together with friends and raised Sh12.9 million. Currently I am in touch with doctors in India and they are trying to save the child," Abass said.

When the Star interviewed this humanitarian, who harbours no political ambitions, he was leading a medical campaign to save a Wajir woman in need of Sh5 million.

Through #HamdiMedicalFund on social media, Abass's team has since raised Sh4 million.

"Nobody does something alone, I remain very grateful for people who have supported me when I came calling," Abass said.

He, however, believes that conducting social media campaigns for every new case is not sustainable.

One of the most curious spectacles in Kenyan public life has to be the official opening ceremony. At this special occasion, while something new is ...
Sasa
7 years ago

It is for this reason that the budding humanitarian has established Sustainable Drylands Initiative, a not-for-profit organisation to help address socioeconomic challenges in Northern Kenya.

He wants to make a difference in his home county and to start, he wants to secure healthcare cover for at least 300 families in Wajir county.

With the hashtag #AdoptAFamily or #AfyaMashinani, his organisation intends to work with the National Health Insurance Fund, corporates and county government to provide annual Sh6,000 health cover for poor families.

He is targeting at least Sh3.6 million to start the programme, which will benefit 50 families from each of Wajir's six constituencies.

He targets mid-October as the commencement time for the NHIF programme.

"We have engaged some members of Parliament and other local leaders to see how best we can go about it," he said.

"This programme will be defined by transparency. Anything that comes in will be made public; we will safeguard the privacy of beneficiaries."

He said access to healthcare remains a challenge to families, especially the vulnerable groups.

"If we save them the burden of health costs, they can spare something for other needs," Abass said.

He added that the Afya Mashinani programme is in line with President Uhuru Kenyatta's Universal Health Care arm of the Big 4 Agenda.

"The President has given us a direction of what he wants to give Kenyans. As the people, we also have our responsibility to support the achievement of these," he said.

Besides health, Abass is engaged in charitable activities aimed at fighting poverty, especially in his home county.

Together with his younger sister Jamila Abbas, the co-founder and chief executive officer of MFarm Kenya Limited, they are paying school fees for eight bright girls.

“This is something we are doing on our own. Personally, if I educate 1,000 orphans, I can rest," he said.

He believes tackling education and health will reduce poverty, which makes youths in the region vulnerable to social ills like terrorism and drugs.

"If we have security in Northeastern region and we have water, the two will be key components in developing the region," Abass said. 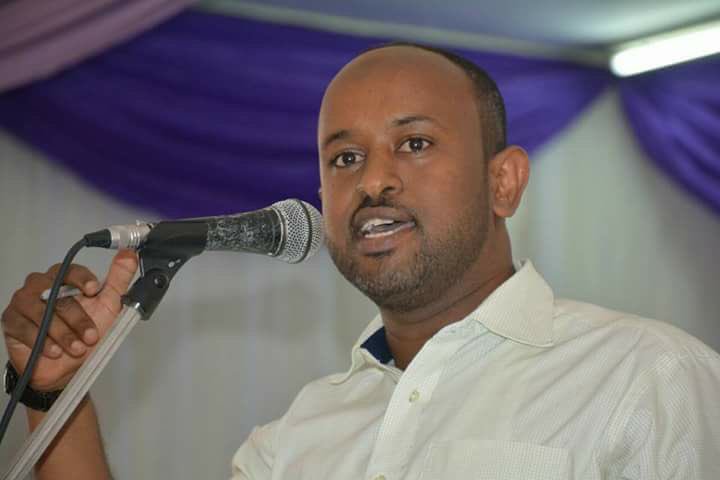 He asked for support from the President and US Ambassador Kyle McCarter. He said he singled out the US because the world power house has shown a lot of interest in youth development in the region.

Abass said there is high unemployment in a county like Wajir that has forced many youths into drugs. When someone dangles a carrot (radicalisation), they fall for it almost immediately.

"I want to repurpose the meaning of life for these young people, the age of 18 to around 35 years, and I need support to achieve this so that they can have a better future," he said.

Abass is married with three children, two boys and a girl.