It's only two months old, but Mathare Goalkeepers' Union is dreaming big

• The youngest, Joseph Otieno, seven, hopes to one day play for Manchester United 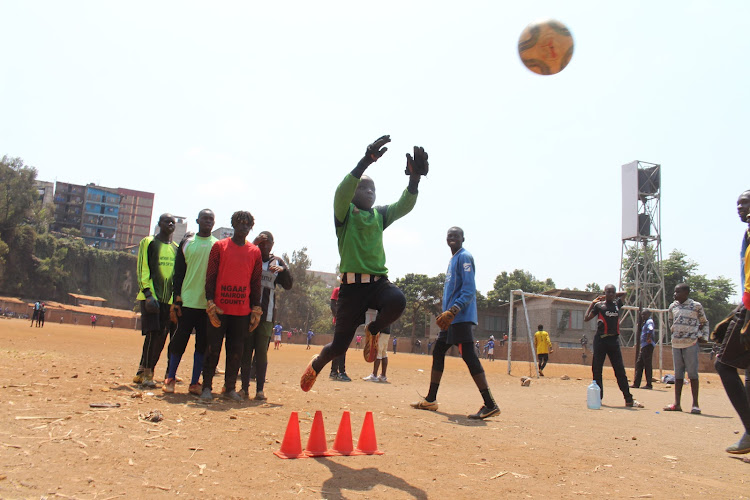 Joseph Otieno, seven, aims for the ball during a training session at Mathare 4A Primary School training ground at Mathare 4A on July 25
Image: ANDREW KASUKU

Joseph Otieno, seven, has lofty ambitions of one day becoming the first-choice goalkeeper at English side Manchester United.

Otieno, a class three pupil at Excellent Primary School in Mathare, is one of the 42 young keepers who have benefited immensely from training sessions at Mathare Goalkeepers' Union academy.

“I have learnt a lot from these sessions because I am now a better keeper than before,” Otieno, nicknamed 'Junior' by other players, says.

“The coaches have helped me work on my reflexes, shot stopping and even using my feet.”

He may be understandably camera- and publicity-shy, but Otieno is no slouch between the posts.

A picture of him stretching on the dusty grounds of Mathare 4A Primary School to stop a shot has earned him widespread admiration on social media.

At a time when the academic calendar in Kenya has been disrupted by the Covid-19 pandemic, Otieno is grateful that he has found solace in his passion to distract his mind from the challenges at home.

“I just love goalkeeping a lot because everyone in the team depends on you to bail out the team when the opposition is attacking. I am confident that with what I have learnt here, I am going far,” Otieno says with a beaming smile.

They used to earn Sh500 a month but now rub shoulders with the best.
News
3 years ago

Wendy Sylvia, 15, has never been in better shape physically and mentally than since she began training at the academy two months ago.

“Coming here everyday ensures my muscles do not waste away so that when I return to school, I will be able to maintain my form for the school team,” the form two student at St John’s Murang’a High School says.

She could have been a striker or a midfielder, but instead she chose to be a goalkeeper out of love for her country.

“Kenya is lacking in good goalkeepers. In the next five years, I am hoping for a call-up to Harambee Starlets, where I believe I will be able to soar higher to international levels,” Wendy, who also idolises de Gea, says. 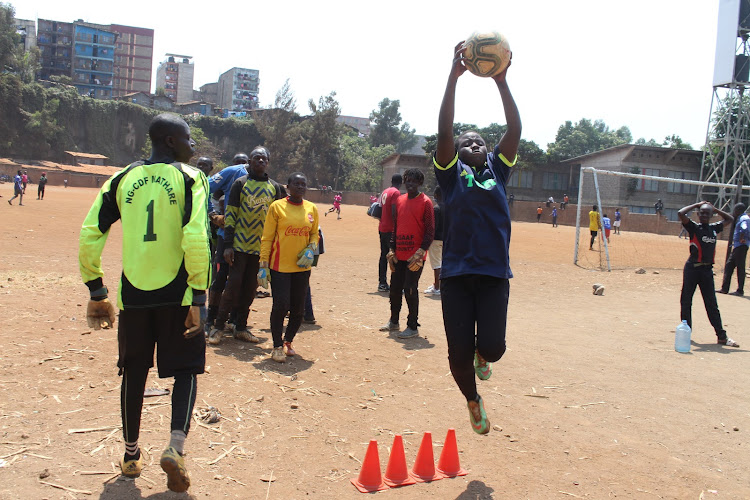 Wendy Sylvia jumps up to collect a high ball as academy captain Joshua Keya (left) looks on during the training
Image: ANDREW KASUKU

The support from her mother fuels her sporting dreams, and Wendy is determined to repay her mother for this trust.

“When I told her I want to become a goalkeeper, she encouraged me and told me to work hard so that one day, we can escape this life of poverty in the slums,” Wendy says.

Ever since the age of five, Joshua Keya, 15, had desired to become a world-class custodian.

Even a stint as an infield player in his primary school team would not terminate his passion for goalkeeping.

“I cannot say there is something specific that motivated me to become a goalkeeper. I think my instincts and talents as a goalkeeper was in my blood ever since I was born,” Joshua says with a chuckle.

The form two student at St Teresa’s Secondary School in Eastleigh is thankful to the academy for saving him from a life of drugs and depression.

“Most of my peers have been really affected by the drug menace during this corona period. Some are living in depression because of the hardships of life,” he says.

Joshua uses Bayern Munich and German goalkeeper Manuel Neuer as the template for his career development as a net-minder.

“I admire his ball distribution skills and the way he stops shots. I'm hoping to one day play for Tusker FC before moving abroad, whether it is in the Chinese league or any other,” Joshua says.

Founded two months ago, the academy holds its training sessions every early morning at Mathare 4A Primary School playground.

Levi Ojuok, founder and head coach, says he was motivated by the desire to save his neighbourhood youth from the clutches of drug addiction and crime.

“This corona period has left many young people feeling idle and prone to all kinds of evil. This is a vision I have had for a long time, although this period hastened the process of starting this academy,” Levi says.

Among the playing ranks of the academy are six female goalkeepers aged 10-22 years old.

The academy is divided into two age groups consisting of 10 players aged between eight-12 years and 32 players aged 18-22 years.

“Our training is geared towards creating the modern goalkeeper in the mould of Ederson (of Manchester City) and Ter Stegen (Barcelona),” Levi, himself a player at Zetech University, says. 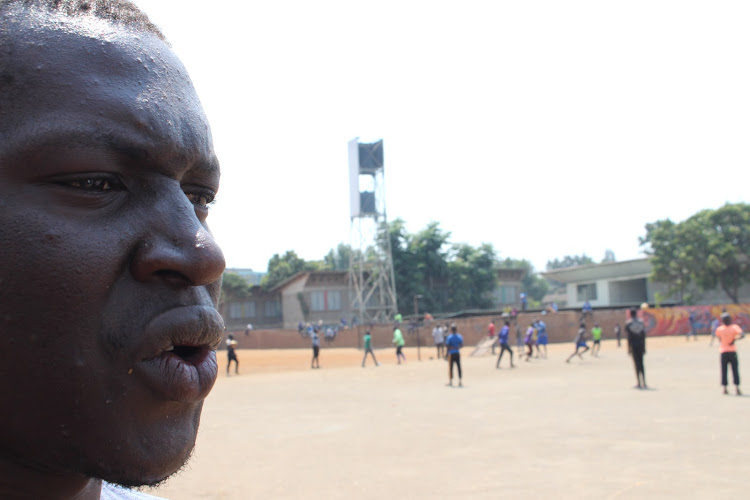 He was inspired by similar efforts by Gor Mahia goalkeeper Boniface Oluoch, who has established his own academy to forge the next generation of Kenyan goalkeepers.

His vision in the next five years is to see many teams in the Kenya Premier League and National Super League making a beeline for many of the academy’s graduates.

“What I want for Junior in the next five years is to see him enrol for FKF’s Centre of Excellence or even sign for Kariobangi Sharks under-12 side. I am hoping to see many of these players sign for teams in the KPL and NSL,” he says.

Already, some of his students are attracting admiring glances from teams in Division 1 and 2.

One of them is Eric Wafula, alias Jagoal, who began his playing career at Salama Primary School, Mathare.

“I hope to play for Gor Mahia one day and maybe the exposure will get me to Manchester United. I used to admire Edwin van der Saar (former Manchester United keeper) and hope to follow in his footsteps,” Wafula says.

The importance of education is also not lost on Levi, who is always quick to mentor the young ones on the need to immerse themselves in books at their spare time.

“The life of a footballer is an uncertain one because of the injuries that may disrupt their playing career. So, we always emphasise the importance of paying attention to their studies,” Levi, who is set to graduate this year with a Bachelor of Arts in Information, says. 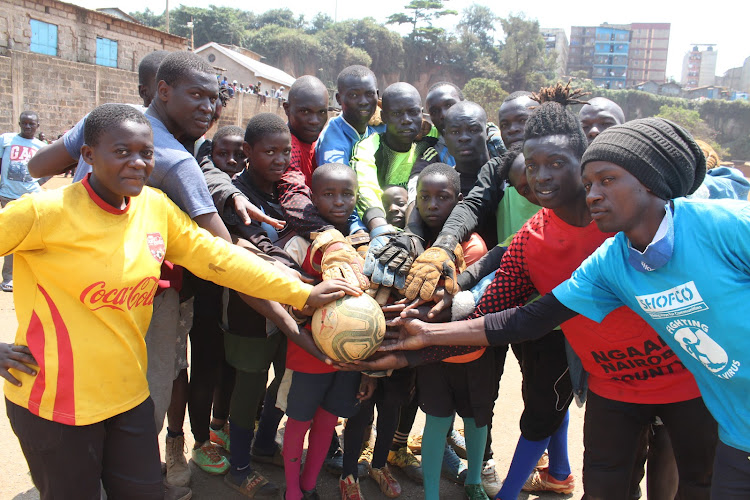 Nonetheless, the scourge of poverty continues to tug at these players as they strive to reach greater heights in their playing careers, as Joshua attests.

“Apart from lacking gloves and playing boots, getting a decent meal has been a challenge for me. It is difficult to perform well on an empty stomach,” he says.

The academy has been lucky to receive food donations and sanitisation materials from charitable organisations, such as Shofco.

On the pitch, training equipment has been their biggest headache as Levi himself confesses he is not financially stable.

“Even when we started, we had to fundraise among ourselves to buy balls. We were only able to purchase two footballs, which is not enough for us to train in this big group,” he says.

Apart from footballs, Levi is calling upon well-wishers to support them with more goalkeeping training equipment, such as football boots, cones, gloves and appropriate keeper jerseys.

To be a great goalkeeper is to lay down one’s life for the cause of a whole team.

It requires a warrior mentality and a sober mind that is always alert to parry away every shot from the opposition.

Joseph Otieno and company are not only building a mental fortitude to overcome the Covid-19 turbulence but also to surmount the challenges in their path to being mentioned in the same breath as De Gea, Neuer and Ederson, among others.