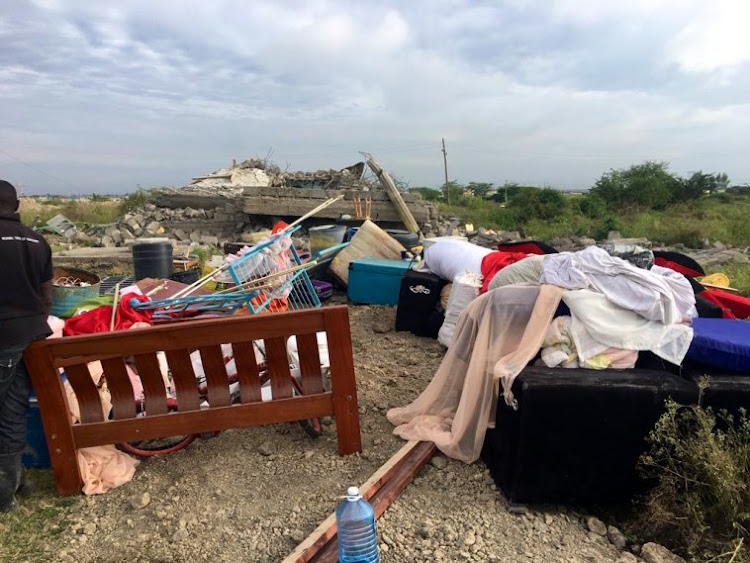 Properties of residents who were evicted from their houses in Ruai on May 16
Image: COURTESY

When President Uhuru Kenyatta announced two additional cases of Covid-19 on March 13, he asked Kenyans to stay at home whenever possible to avoid further Covid-19 infections.

Ironically, thousands of Kenyans have been rendered homeless due to demolitions and fire incidents.

On April 27, over 1,500 residents in Ruai, Nairobi, were ordered to demolish their homes sitting on the 3,000 acres earmarked for a sewerage treatment plant in the area.

On May 16, bulldozers moved in and flattened houses of residents who had failed to demolish them, leaving them in the cold.

A week earlier, the government had halted demolitions during the Covid-19 period.

This was after a public outcry over the displacement of 5,000 residents in Kariobangi North, where the government moved in to repossess the land earmarked for the Dandora Waste Sewerage Plant.

Two months later, on June 25, hundreds of families of Gorofani were startled awake at dawn by the smell of fumes engulfing their homes.

A rude shock awaited those who had elected to stay in their partially burnt homes after bulldozers flattened whatever was left of the 11 in the pitch darkness of the night.

The fire incident in Gikomba followed another one two months earlier in Kaptagat area in Kangemi, where tens of families lost their shanties to a night fire.

In Marioshoni and Nessuit wards in Mau Forest, 300 families from the Ogiek community are the latest casualties of this wave of evictions after Kenya Forest Service rangers demolished their houses on July 7.

More than 5,000 families in the area are living in fear of displacement as the government continues its plan to reclaim the expansive water tower.

Fear has also gripped over 20,000 residents of 10 estates in Langata area after the government said it would demolish their palatial homes for illegally sitting on part of Ngong Forest.

Although the Environment and Land Court on Friday halted any pending evictions, the government’s record in obeying court orders offers no respite for the homeowners.

Added to these evictions, the threat of homelessness looms over many other Kenyans who have defaulted on rent due to the tough economic times.

The latest survey by the Kenya National Bureau of Statistics on the socioeconomic impact of Covid-19 indicates 30.9 per cent of Kenyans have not paid their rent for July.

These are Kenyans who would usually pay their rent on time.

If these statistics are anything to go by, homelessness (or the threat of it) will become a core source of mental torment for hundreds of thousands in the country.