FISH OUT OF WATER

• “Since the coronavirus came, everything has stopped. I have used all my savings and now we eat whenever God helps us find something to eat. Sometimes we go to bed hungry for three days in a row,” Jumbale says.

• Three fishermen say they have heard about Covid-19 funds meant for the elderly people like them but they are yet to benefit. 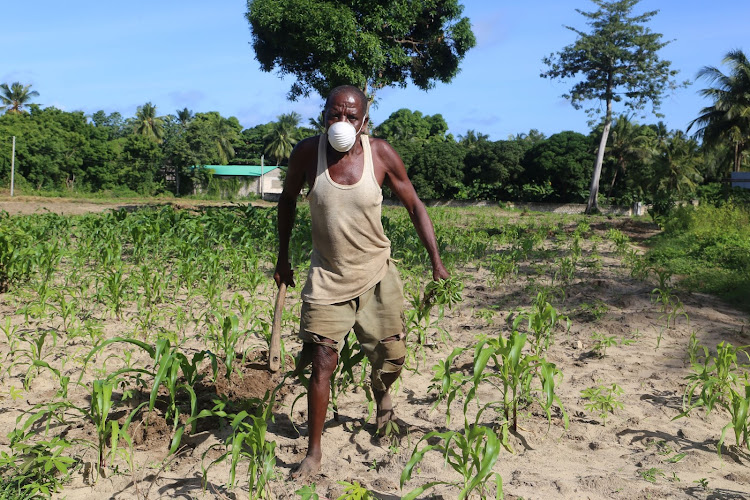 FISH OUT OF WATER: Kishenga Jumbale at a neighbour's farm, which he tends and weeds..
Image: BRIAN OTIENO

@YobrThe wrinkles on his face reveal not only years in the sun but also troubling thoughts despite Kishenga Jumbale's best efforts to wear a smile.

The hoe resting on his left shoulder seems a burden and it is. He used to be a fisherman for 58 years in the Mawamba A Scheme of Mtempeni ward in Kilifi South subcounty.

Now the beaches have been closed, gatherings banned and fishing prohibited to prevent the spread of the coronavirus. 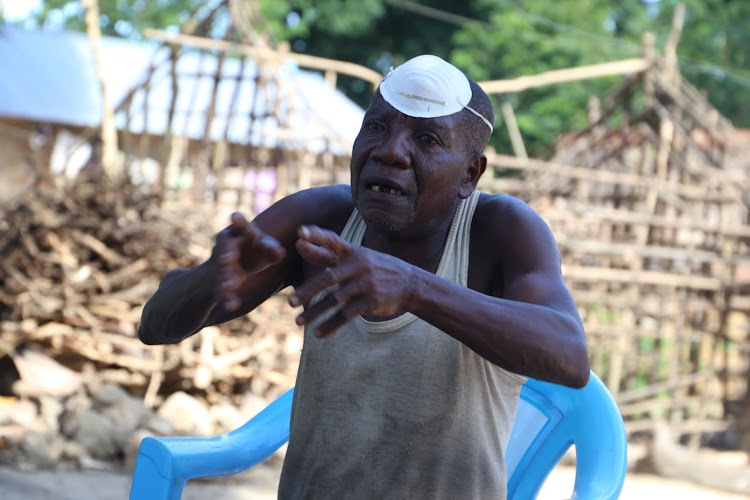 He's a fish out of water and doesn't like it. His wrinkles have gotten deeper and more numerous in the past three months.

Jumbale pulls up a chair and dusts the dirt off his discoloured white vest and the tatters of what must have been trendy blue jeans at one time.

He's joined by other out-of-work fishermen and fish sellers who describe hunger, lack of government assistance and the sinking feeling that life is going downward.

This toil on the land is strange and he doesn't like it. 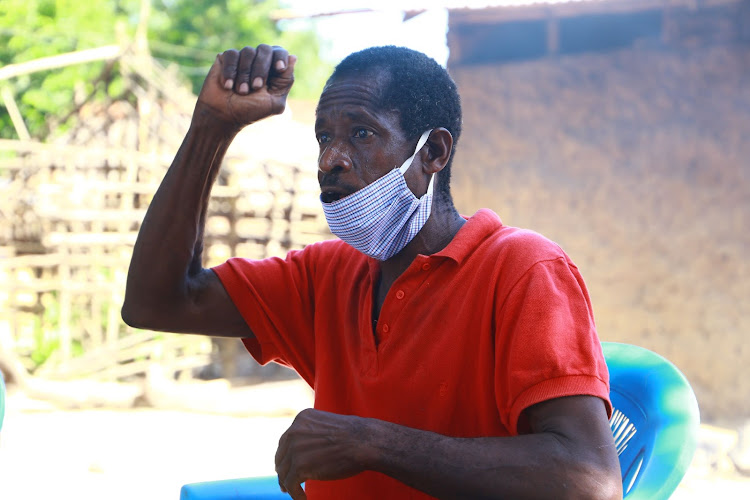 DISAPPOINTED: Mawamba A Scheme Nyumba Kumi representative says no one is getting help.
Image: BRIAN OTIENO

On May 28 the government announced Sh10 billion from the World Bank to help Coast fishermen, but they haven't seen it yet.

When Kenya announced its first case of the coronavirus on March 13, Jumbale didn't for second think it would turn his life upside down.

“But we were told not to go to the seashore anymore. We left our boats and equipment there and don't know when we'll go back," he says. 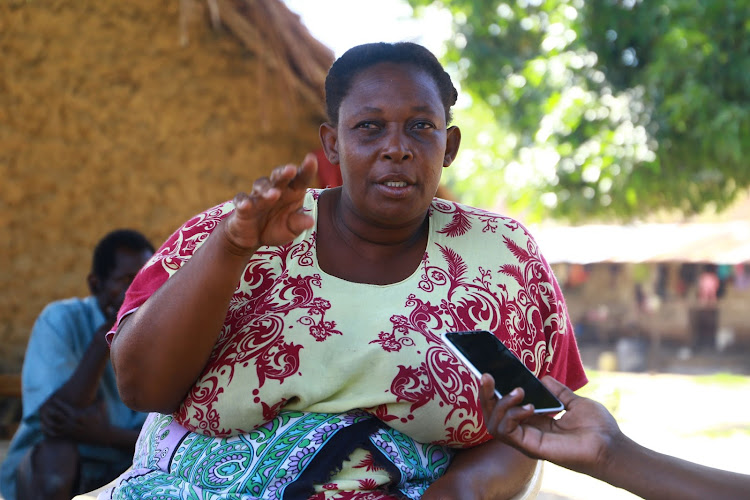 ONE MEAL A DAY: Fish seller Mwanaisha Mansuris peaks to the Star at her home.
Image: BRIAN OTIENO

People were told to not to gather and not to go fishing together lest they spread the virus.

Jumbale has heard the government helps some people.

“We only hear people are given food and some token to get by. We are left to struggle on our own. I long to have even Sh1 in my pocket so I can feed my family. But it's impossible,” he says.

Before the coronavirus, he would catch an average 10kg of assorted fish and another 10kg of octopus whenever he cast his nets. A kilo of fish would sell for Sh250, a kilo of octopus for Sh200. 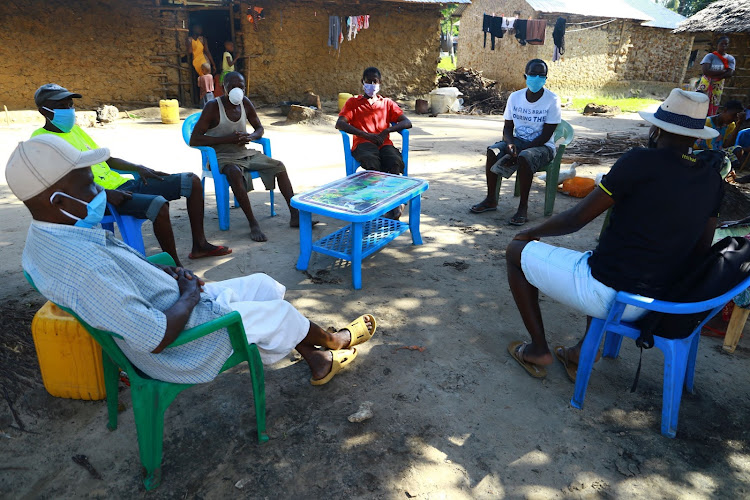 AIRING GRIEVANCES: The fishermen at Jumbale's homestead during the interview.
Image: BRIAN OTIENO

That would feed his wife, nine children and grandchildren.

“Since the virus came, everything has stopped. I have used all my savings and now we eat whenever God helps us find something. Sometimes we go to bed hungry for three days in a row," Jumbale says.

Now that he cannot fish, Jumbale and others have resorted to farm work to at least earn something.

“I used to get Sh100 to tend a piece of land. But this is also hard to come by now because people say they have no money to pay anyone anymore,” he says. 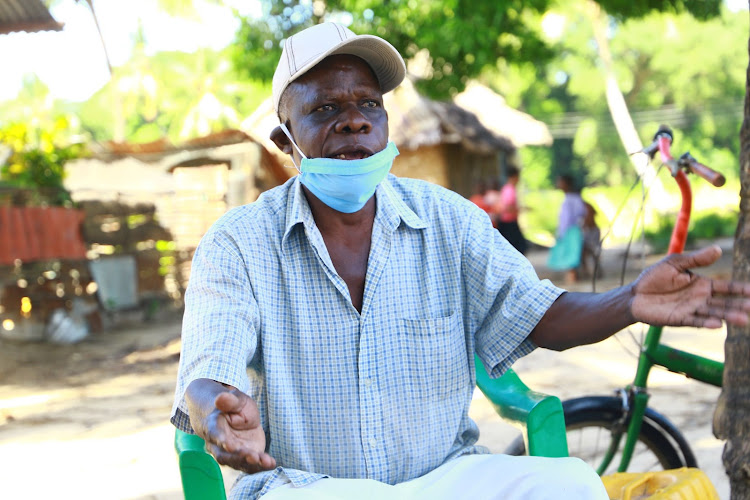 Reuben, also a fisherman, says he has to feed his seven children alone after his wife died years ago. Like Jumbale, he begs for odd jobs on farms.

“Farm work is hard and saps your energy. We're old but we have no choice," Reuben says.

The rate is Sh1,000 to tend an acre including, tilling, weeding and other work. Because of their age, it takes them a few days to work the whole acre. 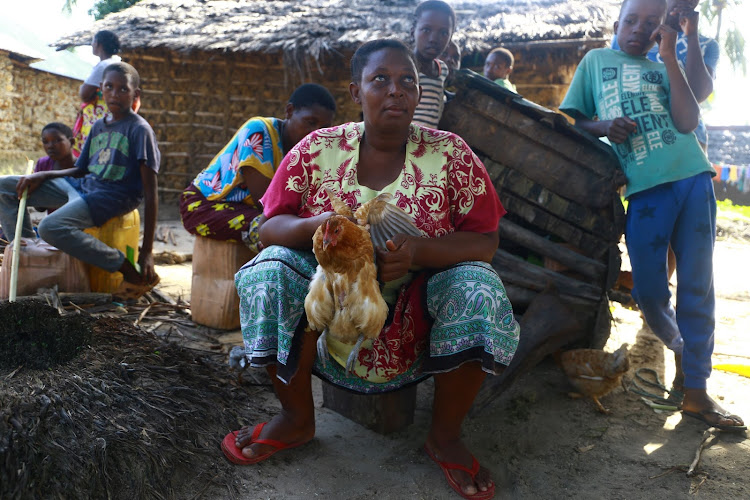 Shadrack Andore has been a fisherman since 1963.

In all those years he has never had more trying times than these.

“Everything has stopped. We have no work and we have children and grandchildren to feed,” he says. He has a wife and 12 children.

The three fishermen say they have heard about Covid-19 funds meant for elderly people like them but they haven't received a shilling.

Daniel Mugandi, the Nyumba Kumi representative, says he took their names, the number of people they support and the name of their village elder.

While others have received some food and cash, those in Mawamba A have not. "We don't have any explanation," Mugandi says.

Ex-fisherman Andore says he has been unable to save any money because his family is large. 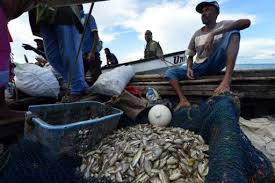 SMALL FISH: Kenyan fishermen and their small catch before they were ordered not to fish and to stay away fro beaches to stop spread of the coronavirus..
Image: COURTESY

“In fishing, it is hard to save any money,” Andore says. He is registered along with Reuben under the Kanamai Beach Management Unit.

Jumbale is registered under the Bamburi Beach Management Unit, meaning he had to travel all the way to the Jomo Kenyatta beach in Mombasa to fish.

The pandemic has not only affected the fishermen but also the fishmongers, who depend on them.

Fishmonger Mwanaisha Mansuri says life has changed drastically. She had been buying fish at the Jomo Kenyatta public beach in Bamburi.

“I used to take a boda boda from here to Majengo for Sh50, then a matatu to Bamburi for Sh100."

Now she has spent all her savings.

She does house cleaning and farm work but these jobs have dried up because people don't have money to pay her. 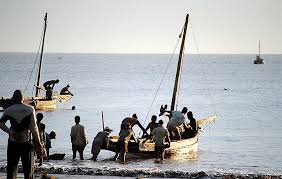 “Even when things get back to normal, I don’t know how I will start all over again because I have spent everything," Mansuri says.

Mugandi is disappointed none of his people has received any government help after he spent a whole day listing everyone.

He has heard some people received Sh2,000 from the cash transfer programme and others from the Covid-19 relief funds.

“I don’t know what happened, all I can do is encourage them not to give up. I cannot bash the government and I also cannot commend them now," Mugandi says.

The government owes people an explanation - and help - he says.

“I advise fishermen to thank God and not to give up,” Mugandi says.

Mansuri also has not received any help. Her seven children get only one meal a day.

Washing clothes is now a luxury she cannot afford because she would rather buy food than soap.

“All I can afford is one meal a day. When I get Sh100 from people’s farms I buy maize flour and look for wild fruits or weed called vongonya that we cook. That’s all until our meal the next evening," Mansuri says.

“We see on TV people getting food aid in other parts of Kilifi and we have been waiting patiently. Now the country is almost being opened up but nothing has come our way,” she says.

When the Star visited the village, fewer than 10 people were seen wearing face masks.

“You are very funny. Face mask? That costs almost Sh50. They are only sold along the road. It costs Sh50 to get to the road from here. And Sh50 back.

“Going to buy one mask will cost me Sh150 including fare. Will I use that money to buy a packet of maize flour or the mask? " she asks.

Agriculture CS Peter Munya announced the government on May 28 the government has received a Sh10 billion loan from the World Bank to benefit fishermen at the Coast.

On that day he signed agreements with Mombasa, Kilifi, Lamu, Kwale and Tanu River, which are to benefit from the concessional loan.

He said Kenya has about 13,000 small-scale fishermen and fish sellers who operate near shores where the fish stocks have declined.

“The ministry aims to build their capacity to venture into Kenya's deeper waters to increase their yields. Already, 186 fishermen have been trained in Kilifi and Lamu with plans to train more after the pandemic passes,” Munya said.

Sociologist Dr Justus Aungo at the University of Nairobi in Mombasa, says the effects of Covid-19 are multipronged and long-lasting.

The effects of Covid-19 are felt throughout the fishing value chain. A decision at one level has a domino effect that reaches the most unlikely of victims.

“The fishermen can’t fish, the fishmongers have nothing to sell. Their households can’t eat and their health is deteriorating,” Aungo says.

He said the curfew and containment measures are changing the lives of fishermen and their dependents for the worse.

Social protection measures to families like these will keep their dreams and hopes alive, the sociologist said.

He said the government needs to consider fishermen as part of the informal sector.

“When you look critically there are a lot of things that need to be done. People like these probably will not be reached among the targeted people," Aungo said.