Kenya needs the support of two-thirds of UN members (129 votes) to win the seat.

• The council enjoys robust powers, including the imposition of sanctions and authorisation of military action when international peace is threatened.

• If it wins, Kenya will officially become Africa’s representative at the UNSC non-permanent seat for the 2021/22 period. 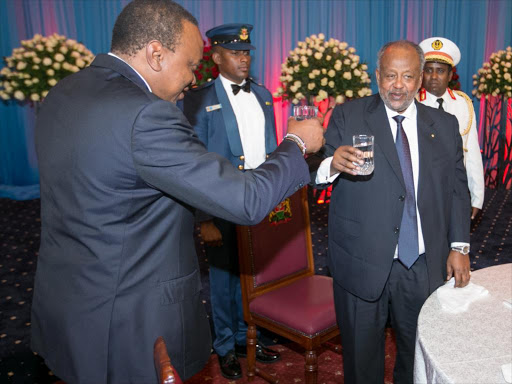 Kenya has expressed confidence in winning a seat at the United Nations Security Council.

The council enjoys robust powers, including the imposition of sanctions and authorisation of military action when international peace is threatened.

If it wins, Kenya will officially become Africa’s representative at the UNSC non-permanent seat for the 2021-22 period.

Kenya’s representation in the UNSC will be significant because it is the second-most important arm of the UN after the General Assembly.

It deals with global peace and security and every country is entitled to sit at the council.

Kenya’s candidature signals its responsibility and contribution in the peace and security process the world over.

Kenya however faces stiff competition from Djibouti which has been conducting campaigns to counter Kenya’s candidature.

The face-off with Djibouti came after the Horn of Africa state declined to concede defeat, in an AU election for the position in August last year.

Djibouti has used the current maritime dispute between Kenya and Somalia to downplay Kenya’s candidature.

ICJ grants Kenya another delay in maritime case with Somalia

Kenya has been calling for an out of court settlement but Somalia has insisted on the ICJ.
News
2 years ago

President Guaelleh said Djibouti ought to be Africa's sole representative for the non-permanent seat for the 2021-22 year based on the Africa groups and AU's clear rules and longstanding precedents for selecting a candidate.

He said Djibouti, with the support of many fellow African countries, openly and vigorously challenged the validity of the "flawed" endorsement in 2019.

But Kenya's Foreign Affairs PS Macharia Kamau downplayed the claims that Djibouti has been undermining Kenya’s efforts in its campaigns.

Macharia said Djibouti’s campaign strategy does not in any way amount to undermining.

“We are all in the race so let them race because they have been exercising their rights. It is a fair competition,” he said.

He said Kenya no longer considers the matter about the candidature but the values and the principles it has chosen to abide by.

“As a country we have remained restrained, choosing to run a dignified campaign that upholds African values and which focuses on the contribution it intends to make towards creating a just and peaceful world,” he said, while responding to President Guaelleh’s claims Kenya said it had been disturbed by a persistent and dishonourable campaign that Djibouti has been using to misrepresent the facts.

Kenya said AU's endorsement is its responsibility to carry the hopes and aspirations of Africa.

"It is a responsibility for which Kenya is well prepared and a duty that Kenya embraces with deep sense of purpose," the statement read.

Ambassador Macharia said if Kenya does not win the seat, it does not mean that it will stop presenting its agenda on the international scene.

“There are many other areas on both the regional and international platforms that Kenya is actively involved in and will continue to even after the election. UNSC is just a fraction of that,” he said.

Kenya needs the support of two-thirds of UN members (129 votes) to win the seat.

Macharia said Kenya has remained proactive in its campaigns in selling to the world what it intends to achieve at the Council.

Macharia said despite the current COVID-19 pandemic that has crippled economies and affected international travel, the president of the UN General Assembly has communicated to all member states that the election will be held on June 17.

He said as a result, all the member states have agreed on how the election will be conducted in line with the WHO guidelines on COVID-19.

"Initially the president of the General Assembly had indicated the possibility of an electronic vote but as we speak, it has confirmed been confirmed that the voting will be done by individual member states in an orderly fashion put in place by the UN,” Macharia told the Star.

He said the 193 countries expected to take part in the voting process will be put in batches of between 12 and 24 as a measure to observe social distancing.

The countries will arrive on different dates, cast their votes before others arrive.

"This is because we are looking at the physical vote through secret ballot,” Macharia said.

According to the PS, Kenya is majorly banking on the AU membership support through its Embassy in Addis Ababa as it remains the only candidate endorsed by AU.

He said the mission in New York has also been working round the clock conducting broad campaigns through regional and international channels.

We are confident that we shall win the vote. We have remained active on social media, engaged our friends on targeted platforms and had direct interactions with key players through our missions abroad

He added, “We have also done a lot of supplementary work to promote Kenya’s name through regional and international engagements”.

Macharia said President Uhuru Kenyatta has also been on the front line selling Kenya’s agenda to his counterparts.

“The President has been proactive in speaking to his counterparts. He has even sent them personal letters to remind them of Kenya’s candidature and as a sign of good will we know they won’t let us down,” he said.

He said the head of state has held several regional and international virtual meetings and the response has been very positive towards Kenya’s candidature.

Uhuru’s administration has been banking on its 10-point agenda in its campaign — building bridges, peacekeeping and support operations, regional peace and security, countering terrorism and prevention of extremism and women peace and security.

Djibouti reversed its decision to back Kenya’s endorsement by the AU.
News
2 years ago

There are five UN member states at the council; the US, the UK, Russia, China and France — also referred to as the P5.

The other 188 member states can be elected to a non-renewable two-year term.

Only 10 member states can fill those non-permanent slots at a time, meaning at any one time, there are 15 member states in the Council.

Kenya and Djibouti are seeking to replace South Africa for 2021-22.

While the Council’s decisions are taken by a qualified majority, requiring support from nine of its 15 members, only the P5 can veto.

Kenya stands a good chance because it brings to the table its experience of supporting unstable governments in Somalia and South Sudan, and in assisting refugees in the region.

Why Kenya needs the seat

Other than ensuring geographical balance and commitment to the United Nations’ mandate, non-permanent members of the Security Council are elected on the precedence of their contribution to the maintenance of peace.

Kenya views itself as the best candidate because its troops are part of the African Union Mission in Somalia that supports the fight against al Shabaab terror group.

Professor Macharia Munene who teaches International Relations at USIU-Africa told the Star that Kenya’s presence at the Council will be of great value, but will depend on her interests and values for its citizens.

Munene said Djibouti’s insistence on the race is likely to be out of external forces against Kenya.

“There could be extra continental forces having issues with Kenya that are pushing Djibouti to downplay AU’s endorsement,” he said.

Munene’s sentiments are echoed by John Gachie, a former Foreign Affairs editor at the Nation, who said Kenya stands at a better position bearing in mind the interests it has for the region, especially the fight against terrorism.

“Kenya is seeking to have a grip on the new level on the Horn of Africa. The bid is thus very vital for the country,” Gachie said.

Gachie said geopolitical factors such as piracy, terrorism and trade may pose a challenge to the bid and that Djibouti can only sail through depending on how it profiles itself.

“It is true that Djibouti plays host to military bases of France, the US and the latest China and that they are the main entry to the Gulf and the Red Sea. However, as much as the military presence gives them an advantage over Kenya, they would have to tread with the bid carefully not to jeopardise relations with AU, which has already endorsed Kenya,” he said.

Gachie said the states would have to do a critical analysis of what benefits them in terms of trade for Kenya or military strategic interests for Djibouti.

“There is a high likelihood that any endorsement might send a wrong signal to the other side,” he added.

“AU support notwithstanding, Kenya has leverage with a large bilateral interest. Although AU has made its determination to endorse its candidature, it has no powers to sanction Djibouti,” he said

These five states will have to play a careful game so as not to show a preference.

Gachie further noted Djibouti’s insistence on being in the race might put its future relations with the AU at stake.

Despite its military presence in Somalia, Kenya has also offered immense support in the political process in Somalia.

“Kenya has made its way to the international category by its tremendous support to humanitarian work. We host approximately 500,000 refugees in Dadaab and Kakuma refugee camps most of them from South Sudan and Somalia,” Macharia said.

Kenya’s bid for UNSC seat gets boost from new envoys

The country has previously been a non-permanent member of the council twice.
News
2 years ago
by PATRICK VIDIJA Investigative Journalist
Big Read
20 May 2020 - 17:52