Why are we not moving faster on online cases?

The judiciary moved its operations online because of Covid-19 and has churned out over 7,000 rulings , but the transition is beset by technical hitches

• However, they appreciate technology and note that their cases are not hanging 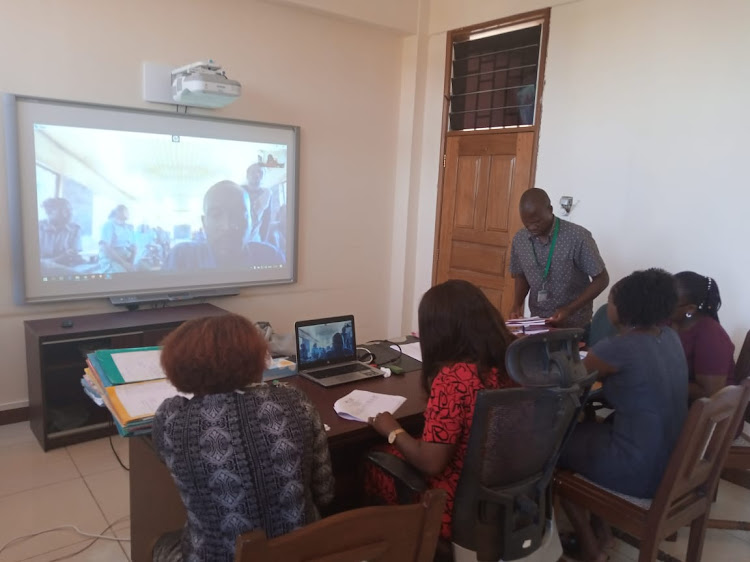 A constitutional lawyer recently summed up the technical nightmare lawyers are facing while trying to deal with cases online.

Arnold Ochieng said 98 per cent of such sessions consists of lawyers asking the judge whether he can see them or hear them.

“It is even confusing to my neighbours. They keep hearing me shouting, 'My Lord, can you hear me?' Or 'I can’t hear you, my Lord',” Ochieng said in a tweet in that has gone viral.

The use of technology for hearing court cases by the judiciary was necessitated by the outbreak of the coronavirus pandemic and subsequent social distancing rules.

A virtual court session is when parties in a case use online platforms like Skype or Zoom to attend court hearings or mentions.

These online Court sessions are basically 98% us asking the Court whether they can see and hear us 🤦🏿‍♂️😭 it is even confusing to my neighbors. They keep hearing me shouting “My Lord can you see me?” “I can’t hear you my Lord” pic.twitter.com/kDowYjrTVA

Speaking to the Star, Ochieng said even though technology has enabled the hearing of cases from a distance, it has made lawyers' life difficult.

He says when it comes to bulky documents, you have to scan them and email to the court for filing.

Sometimes these documents bounce back as they may be too large, meaning you have to compress at times a 1,000-page document into bits and send different attachments, which is tedious.

“The difficulty we are having is these documents are so bulky, we need to prepare them, paginate them, highlight the necessary paragraphs, commission-mark the exhibits, and so on," he says.

"When we mail them to the court, they have to print and produce them for the court file for the judge. And it is even hard to know if the end-product that has been placed before the judge is organised like we had filed them.”

At times, the lawyers get the links to the online court sessions very late, perhaps even 10 or 20 minutes to the hearing, and they need to set up their computers and gadgets so they can join the proceedings on time.

Moreover, there are inconsistencies in the applications used by the judiciary because some divisions are using Microsoft meetings, others Zoom and others Skype.

In most cases, clients cannot follow the proceedings remotely because they don’t have the link.

“The link is only shared with the advocates, and in some instances, we have clients who also want to participate in the proceedings and it’s only the judiciary that allows access to the hearing,” Ochieng says.

Connection disruption is another bother. Ochieng says for instance, with Zoom, the judiciary has been using the free 40-minute session. This tends to end abruptly.

“You are in the middle of submission and it distorts everything because you have to wait for fresh links to log in again, and wait for the other advocates to join in,” he says.

Ochieng says communication is also a problem. They keep asking the court can you hear me, can you unmute, do this, do that, and it takes a lot of time trying to synchronise the communication from both ends.

He says they have also been having issues when they write to the court to make inquiries through email. Sometimes they take two to three days to get responses.

For some of the communications, they need urgent responses but are forced to wait, and at times they have to do a follow-up through phone calls.

“But all in all, we appreciate technology. Things have been moving. Most of our matters, we have been going through with them. We have been getting judgment and rulings delivered. At least most of our cases are not hanging,” Ochieng says.

Either people have no capacity to comprehend justice or judges are like witch doctors.
News
3 years ago

Majimbo says he has only done mentions not hearing of cases, but it was not effective. "There was back-and-forth confusion most of the time. All you hear is I can’t hear you, switch on your microphones, and we were not able to do much," he said.

The advocate says he spends almost an hour just trying to get everybody on board for the proceedings, and in the midst of it, other than Zoom going off, somebody gets disconnected due to a variety of issues.

Lawyer John Khaminwa said he has faced the same issues during his cases. He said courts should be opened as soon as possible.

Khaminwa said litigants are not getting a fair hearing in this online mode of hearing cases, and the courts should just be opened.

“We have exaggerated the adverse effects of Covid. Not that it’s not a bad disease, but we have more serious diseases that are worse than coronavirus, and so we should open courts. Let judges decide what matters they can hear in open court and those they cannot,” Khaminwa said.

Khaminwa said if the issue is not don’t handled carefully, it can destroy all the gains the country has made in its constitution.

“Courts and churches should be opened and Kenyans should decide for themselves if they want to attend or not. Life should resume as normal,” he says.

He said Kenyans are losing the opportunity to grow the economy. "People in Africa have good immunity that people in the North don’t have at all, as we have gone through malaria, measles and our blood has certain immunities that the North don’t have," he said.

Earlier perceptions that Africans were immune to the virus have long since been shattered, with nearly 3,000 deaths in the continent. On May 7, WHO warned the death toll could rise to 190,000 in the first year if the pandemic is not contained.

Khaminwa called for Kenya to chart its own path. “Let’s not do things because the others are doing them. I'm 83 and I have been working as usual through this period of the said coronavirus,” he said.

A court is not a physical building but the judicial officer sitting at any place. Whether online or not, the courts are in session

Lawyer Danstan Omari said he has not encountered a lot of challenges compared to most of his colleagues.

The only issue he has dealt with is sometimes most of his matters are scheduled at the same time, which is usually 10am, and he can’t be on the same Zoom meeting or Skype call at the same time.

This means he has to delegate the cases to his associates to handle them so they don’t miss any of their scheduled hearings.

Omari says the judiciary is, indeed, working. "A court is not a physical building but the judicial officer sitting at any place. Whether online or not, the courts are in session."

The Prisons Department and the DPP's office have also had to use the platform for some of their criminal cases of accused persons who are in remand custody.

Last week, the judiciary got a major boost when they received a donation of computers from the EU that will help them with online cases.

While receiving the donation, Chief Justice David Maraga said they have delivered 7,000 judgments during this time of the pandemic.

The DPP's office also received the donations to help them in their virtual cases. Noordin Haji said they have registered over 2,200 cases between March 16 and April 30 countrywide, with 1,043 being Covid-19-related.

Maraga said some of the computers received have been taken to prisons to help with cases, as that was a major challenge for the virtual cases.

ICJ wants the Judiciary to work with Huduma Centres and social justice centres.
News
2 years ago
Post a comment
WATCH: The latest videos from the Star
by ANNETTE WAMBULWA Court Reporter
Big Read
19 May 2020 - 05:00
Read The E-Paper