Invention that could salvage African soil from poor yields

The UD Tech Farm System instantly analyses the soil moisture, the pH and nutrient levels, and then sends an SMS notification to the farmer in real time

• They qualified for the global challenge in Delaware with Sh10m at stake, and were due to travel this month before the coronavirus outbreak got in the way. 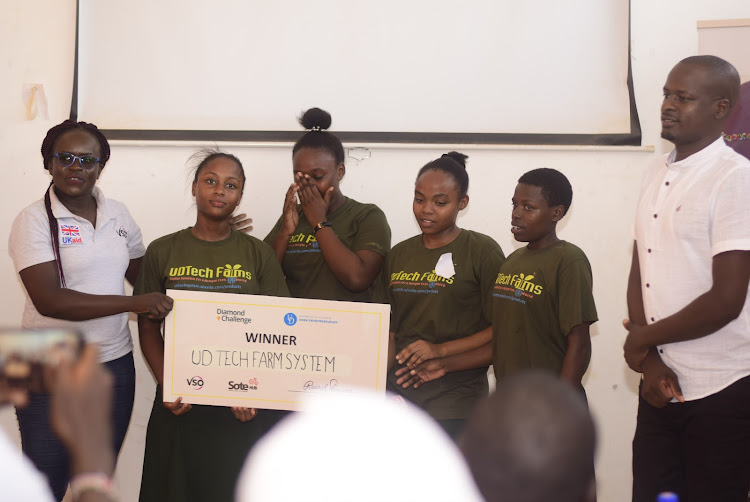 Their strength, determination and zeal to bring home victory have been the key aspect that drives them to win.

They want to increase food production and engender change in Africa.

The four youngsters became the first from the little-known school to win the Diamond Challenge for High School Entrepreneurs on March 4.

“Determination and research have been our secret weapon since the subcounty level competition. We had to polish our idea every day,” Rozalia, a form four student, says.

They are set to travel to the US to showcase their technology at the University of Delaware. They will face off with other competitors for the global challenge, being the only school representing Kenya. 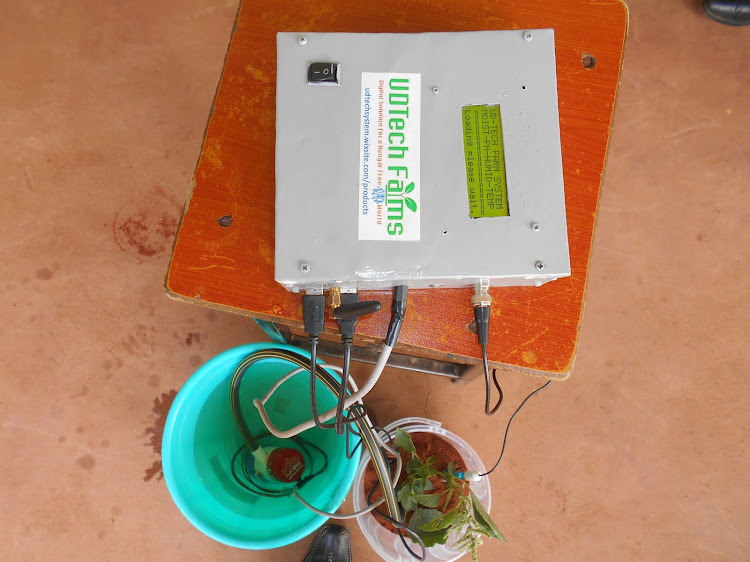 The UD Tech System soil testing kit. It has an auto irrigation monitoring feature that is controlled by use of a mobile phone
Image: SOLOMON MUINGI

They won in the Social Venture category and ranked the best overall in the competition. The innovation competition, run by Startup Africa, connects mentors and upcoming innovators. It also builds skills, especially among students, youth and women, besides spurring entrepreneurship engagement.

In an exclusive interview with the Star, the students said the UD Tech Farm System is a social impact innovation kit that instantly analyses the soil moisture, the pH and nutrient levels, and then sends an SMS notification to the farmer in real-time.

The four vividly recall how they watched their fellow classmates drop out of school to do menial jobs because of hunger at home. Others even got married before completing school due to poverty.

The Kasigau community, settled at the foot of the magnificent Kasigau hill, face hardships in farming because of soil nutrient deficiency and water shortage.

To fight this menace, the students are optimistic that their innovation will eventually return the lost glory of the once successful community.

“Soil tests will save the community money and energy by applying only the amount of fertiliser needed by the plants,” Rozalia says.

The most common soil test performed by the device is soil pH, which is a measure of soil acidity. Soil pH is an important factor in plant growth because it affects nutrient availability to the plants.

The kit has an auto irrigation monitoring feature controlled by mobile phone regardless of how far the farmer is from the farm, thus increasing crop production.

Form three student Happiness says the innovation utilises multi-sensors and Arduino system to conduct several soil tests, and then relays timely information to the farmer’s mobile phone through either an App or an SMS.

“The information relayed advises the farmer on the most appropriate crops that serve well at that particular type of soil,” she says.

For effective and timely message delivery, the arduino is incorporated into the device. This is a specialised open-source electronic prototyping platform enabling users to create interactive electronic objects.

The key cause of food insecurity and poverty is inadequate food production. Continental leaders should respond swiftly by adopting such important measures as affordable soil testing and irrigation

The girls plan to establish a real agro-tech enterprise company as soon as they complete their studies. They want to do mass production of the kit and run several soil tests throughout the country.

Form three student Sophy Mwanjewe says, “We are targeting to help farmers increase food production in line with the SDG2. Being among the continents faced with food shortage, Africa needs to embrace this device. It is a game-changer,”

There is a big gap between the amount of food produced today and the amount needed to feed everyone in 2050. The human population is projected by the UN to increase from 7.3 billion to 9.2 billion.

If embraced, this would arguably be among the best measures towards a food-secure continent. The innovation targets to reduce the tedious process of soil-testing, where currently farmers are forced to do the soil sampling procedure carefully to ensure they get the correct samples for an accurate report.

According to a report published by the UN’s Food and Agriculture Organisation, Africa, in particular, is still far from reaching the Sustainable Development Goal 2 (SDG2) of erasing hunger by 2030.

The 2018 FAO report, titled 'Africa Regional Overview of Food Security and Nutrition', states that more than 820 million people in the world are still hungry, underscoring the immense challenge of achieving the Zero Hunger target by 2030.

Besides low rainfall, dismal food production has majorly been attributed to poor infrastructure in soil analysis and testing.

Their idea seeks to reduce hunger in Africa and beyond with a radical new piece of technology. Sensors on agricultural land detects soil moisture, pH and nutrient levels. If anything is in short supply, the farmer will receive an SMS and can address the problem. The technology would also include a highly innovative auto-irrigation feature.

Form three student Hanifa Mutua, who is also part of the team, says improved agriculture will go a long way in creating jobs for millions of jobless youth across the continent.

She says at least 67 per cent of young workers live in abject poverty, adding that enhanced agriculture and rural economy will play a key role in creating jobs to absorb millions of youth joining the labour market each year.

Further, UNDP reported that the Kenyan unemployment rate was at 40 per cent in 2018, the highest in the East Africa region. However, the chances of youth to get formal employment are even slimmer. Only around 10 per cent of the newly created jobs are in the formal sector.

“The key cause of food insecurity and poverty is inadequate food production. Continental leaders should respond swiftly by adopting such important measures as affordable soil testing and irrigation,” Hanifa says.

Kasigau Girls' principal Mishi Mwagogo celebrates the four as brilliant students and the cream of innovation.

“The win is as a result of team cooperation, hard work and discipline. They have done the school and entire community proud,” she says.

She further points out that, by embracing such innovations, the girls will learn ‘how to fish’ even after they complete school.

Their ICT teacher Arumba Amos hopes to realise the power and promise of 21st-century learning by enriching their creativity, critical thinking and exposing them to practical life skills.

He has mentored the girls since they started the project in 2018, enabling them to participate in many other innovation challenges.

“After learning that they were competing in the same pool with giant schools like St Mary's Yala and Kanga Boys from Migori county, the girls were a bit tense, considering their school is in an Asal zone and little known to many,” Amos said.

"However, with a determined ambition and full commitment, they emerged winners."

The students are now appealing to well-wishers to help them raise enough funds for their travel and accommodation in the United States, initially scheduled for this month but now set to be deferred due to the coronavirus pandemic.

They are determined to catch the eyes of the adjudicators and clinch top position at the global challenge.

There is a $100,000 (Sh10 million) prize pool available for the global winner. The winners can use the funds as a higher education scholarship to any institution in the world, or venture funding.

They are the first African and youngest to win a global law competition.
News
3 years ago
by SOLOMON MUINGI
Big Read
08 April 2020 - 05:00