The Swahili Beach Resort has long grappled with erosion that was a turn-off to potential guests. But after trial and error, it now has a solution 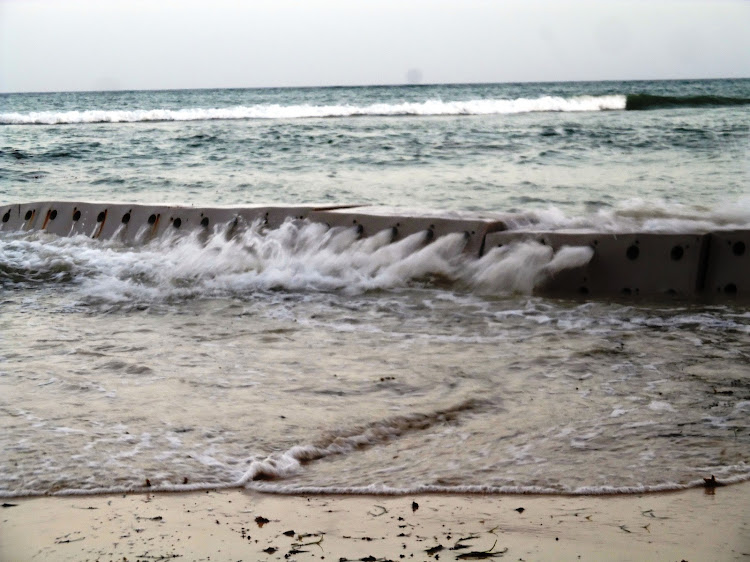 Can you imagine a 5-star beach resort with a rocky beachfront? This is what tourists at the classy Swahili Beach Resort in Diani, Kwale county, have had to contend with before booking.

No doubt it is a possible spoiler for those seeking a leisurely time. They envision themselves lying on the beach in front of their accommodation.

The resort’s general manager Jeff Mukolwe says the absence of an idyllic white sandy beachfront to cap off the facility’s high-end designation had for a long time forced the management to be upfront with their potential guests.

“We have had to be honest by disclosing on our website and whenever we advertised that while Swahili Beach Resort is a nice hotel, its beachfront is not so attractive,” Mukolwe told the Star.

It is not a situation any management would want to be in, let alone one of the three 5-star hotels at the coast. It is just not good for business.

Thanks to technology, however, there is now hope that the problem could soon to be a bygone, boosting the hotel’s business fortunes.

In a mere three weeks since a sandsaver innovation was installed, the hotel’s beachfront had re-nourished with up to half a metre depth of white, sandy beach. When the Star toured the site for a second time two weeks later in late February, the sand reclamation had reached a depth of two metres.

Yet somehow, a stretch of beach covering the Swahili resort’s beachfront and adjacent areas, including that of Kaskazi Beach Resort, have grappled with a long-time beach erosion phenomenon. The stretch is characterised by rocky surfaces of rough-edged coral patches dotting the shoreline.

Mukolwe says the erosion has been such a concern for the resort that about five years ago, they had approached the National Environment Management Authority, seeking permission to find an artificial solution.

“Because it is a beach resort, it was important that we have consistency in the availability of beach sand at our beachfront. Many of our guests were having rough experiences at the beach, with some sustaining injuries that we often had to take them to hospitals,” recounts the general manager.

Nema gave them the go-ahead to explore ways to find a solution, on condition that any method used would not harm the environment.

In hopes of conserving sand washed up to the shores with the high tide, the manager recalls, they tried a copy-paste method borrowed from Zanzibar that involved putting up some sort of a gabion made up of mangrove timber.

Though it seemed to have worked in Zanzibar, it failed to work in Diani.

Then they came to learn about a promising sandsaver technology, but since it has its origins in the US, they found it would be quite expensive to import.

But it also looked quite a simple innovation, so they decided to try out their own modified version.

“We built a small wall in the model of the sandsaver technology that we had seen. But it, too, failed because it happens we didn’t actually know the science behind it, and so we didn’t know what we were doing,” he said.

Eventually, they sought the services of an American expert specialising in the technology. The scientist spent three months at the hotel studying the beach terrain and the ocean behaviour and finally concluded that the problem could be reversed.

“He went back to the US and came to Kenya this January and we installed the sandsaver structures at our beach. In three weeks only, the sand is already coming back, and if you look at the beachfront, you wouldn’t know at all we had a rocky beach here,” Mukolwe said with pleasure.

The technology consists of a structure of separate plastic-made blocks. These are then tied up together to form a chain, and the linked apparatus are then placed at a desirable location along the beach.

Each block has numerous holes cutting across from one end to the other, allowing water to pass through as the currents crash against it.

The openings of the holes vary in size from one end to the other, such that the tide-facing side has larger openings, which narrow down towards the opposite end.

When tides, which also contain sand particles, crash the outer surface of the structures, they pass through, but when it is retreating the smaller holes on the opposite end allow amounts of sand time to settle onto the beach.

However, there are no one-size-fits-all sandsaver modules for all coastal areas. Each design is customised to fit a particular location, taking into account information and knowledge about wind, waves, depth conditions and sediment types.

It had been estimated that the degraded beach would require up to over 25 lorries of sand to artificially fill it up, Mukolwe says.

“And even with this technology, at first we had projected that it would take about six months for the sand to fill-up,” he said.

“But after three weeks, we already have about half a metre depth of sand against our target of 1.5 metres. So now we are hopeful that probably after another two to three weeks, we’ll be fully sorted.”

At the moment, tourists at the resort are comfortably lying down on a sand-filled beachfront.

“This phenomenon experienced on the shores of Kwale is posing a challenge to the investments that have established along the beach. It is causing investors to come up with different ways of finding solutions,” Wafula said.

“However, such interventions put up by investors need to be monitored for assessment so we can establish they are not causing any environmental damage,” he said.

As monitoring continues, the resort also reports that various public and private organisations, including the Kwale government, Kenya Ports Authority and independent scientists, have shown interest in the innovation.

Stakeholders have also pointed out the potential of the new technology to address wider challenges facing the tourism as well as environment sectors.

The Kenya Association of Hotelkeepers and Caterers said the tourism fraternity is closely monitoring the progress of the innovation, especially in light of the beach degradation in Diani as the KPA conducts dredging.

“We are fully behind this initiative and we are going to use it as a case study in the event we’ll need to approach stakeholders in future to see how we can compensate for the damage that has affected the entire Diani area,” KAHC executive officer Sam Ikwaye said.

Following sand harvesting activities off the coast of Kwale county, KAHC commissioned two studies in 2019. The studies concluded that Diani’s beach value and aesthetics were threatened due to the resulting beach erosion.

Ikwaye says local industries can also borrow a leaf from the sandsaver technology since it is entirely manufactured using plastic material.

“We have a huge problem of managing our plastic waste, but investors can actually take this up and produce it locally. That way, we will solve the problem of plastic pollution through recycling and also create jobs for our people,” he said.