How Moi's death divided the country

Reading social media posts and comments, a visitor to Kenya would be forgiven to think that we are mourning two different Mois: one an agent of darkness and the other a fountain of goodness

• In death as in life, Moi is one man who dominated our public discourse 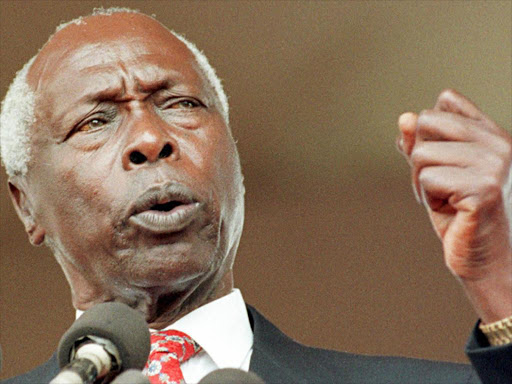 The King is dead. Long live the King. For many years, I was intrigued by this statement, until one day as a parliamentary reporter I listened as former Ugenya MP (now Siaya Senator) James Orengo explained the reason behind it.

According to Orengo, there was never supposed to be a vacuum in the English royal court, and if a king died, by the time the announcement was made, there was already another monarch seated on the throne. So, long live the king was good wishes to the newly installed king.

Reading social media posts and comments on the late Daniel arap Moi, a visitor to Kenya would be forgiven to think that we are mourning two different Mois. One version was seemingly an agent of darkness sent to Kenya to visit upon us plagues worse than the 10 plagues Egypt endured as the Pharaoh held on tight to Israelites, refusing to let them go to their Promised Land.

On the other hand, there are those who see nothing but a fountain of goodness in the departed former leader. To this group, the fact that the military has come out in full force to give their former commander-in-chief a state funeral with full military honours was proof enough that the man had done a good job running the country.

What to say? Okay, to each his own. What is amusing is that those who are all antsy in the pants because of Moi’s (mis)rule were never detained nor arrested by the former President or his agents. Going by their ages, I guess a good number of them only read the stories of Moi’s excesses in newspapers and some books.

One man who has been consistent in his stance that Moi should not be mourned is a man by the name of Onyango Obiero. Ever since the announcement of Moi’s death, the good man has been strident in his opposition to the honours Moi is receiving in death.

In one of his posts, he wrote, “Among the Luo, funeral ceremonies for people who commit suicide or those who committed serious crimes like murder and theft are kept as brief as possible.

“This is because funerals are regarded as a celebration of one's deeds during his/her lifetime. The feat is thus kept brief when the evils attributed to one outweighs his/her good deeds.

“Moi is an evil person who killed many, some of them in the most brutal manner imaginable. Therefore, it is important that Raila Odinga does not make any grand visit to Moi's dead body wearing his traditional colourful Luo regalia. His visit should be as brief as possible and without any pomp whatsoever.

“Diplomacy and political correctness have their place in politics, but we must never cover up Moi's legacy of naked brutality if we seek to take Kenya forward.”

The wearer of the shoe knows where it pinches and when Raila — the man believed to have been the face of the anti-Moi brigade — got a chance to go to Parliament, he was all praises for the man who tormented him at the slightest of opportunities in the dark days of single-party rule.

Probably it was the biggest hope of the anti-celebration group that Raila would have borrowed a line from Mark Antony’s speech at Julius Caesar's funeral:

I come to bury Caesar, not to praise him.

The evil that men do lives after them;

The good is oft interred with their bones…”

However, the former Prime Minister chose to look at the positive side of Moi, for however flawed a man might be, the good Lord gives him some saving grace.

“To the family of our President Daniel Moi. On behalf of the family of Jaramogi and my family. We would like to convey our heartfelt condolences,” he said.

Raila hailed the late former President Moi as a dedicated leader. He made reference to 1958, when he first met Mzee Moi, during the time in which he was nominated to the Legislative Council alongside Raila’s father Jaramogi.

Writing as Moi’s memorial service was underway at the Nyayo National Stadium, Mike Magero opined, “Compare and contrast Mugabe's funeral in a half-empty stadium in Harare and Moi's funeral at a fully packed Nyayo Stadium... This must be shocking to Koigi Wamwere. The reality is Kenyans loved Moi, they knew he was no angel but a man who like any other could sin before God. But Moi protected Kenyans like his own children... and Kenyans felt it and knew that.”

Veteran journalist Mugo Theuri, who was once a political prisoner because of his writing, did not see anything worth celebrating in Moi’s death. “What are people going to pray for? For God to forgive the dictator? To be forgiven for sustaining a tyranny for 24 years? To be protected in future against such brutality? To be given a chance to elect another dictator? To thank the dead dictator for dripping the country with the blood and tears of their friends and relatives? Kenyans are a mysterious race,” he wrote.

But then again, true to form, Kenyans were not letting this chance pass by without drama. It happened that when Raila went to condole with the Mois, he was accompanied by his wife Ida.

A photo taken as the two paid their last respects shows Ida standing stoically next to her husband. And then hell broke loose. According to funeral prefects on social media, the picture showed Ida having a half-smile.

Now what would drive Ida to smile at a dead man? Surely Kenyans are a mysterious race, as aptly captured by Theuri.

One thing is sure about Moi: that in death as in life, he is one man who dominated our public discourse.