Your risk of getting cancer

The NCI says the chance of dying from cancer is highest for breast, cervical, oesophageal, prostate and stomach cancers

• Symptoms of breast cancer include a lump in the breast, bloody discharge from the nipple and changes in the shape or texture of the nipple or breast 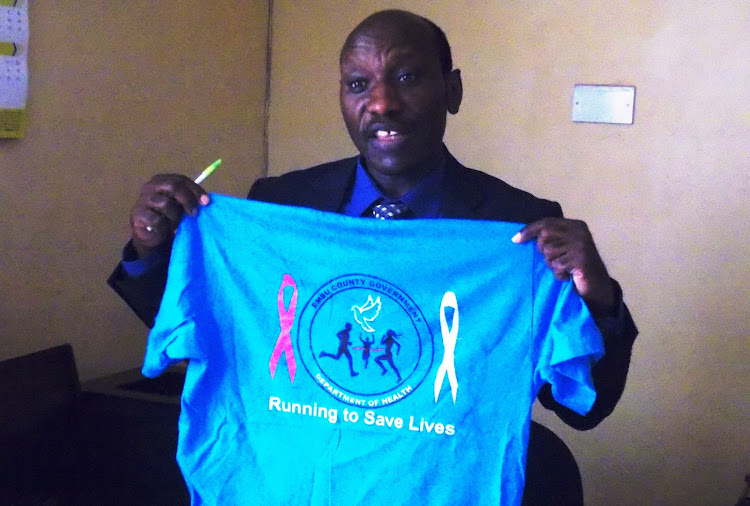 Embu Health executive Dr Jamleck Muturi displaying one of the T shirts that were sold to raise funds during a cancer Marathon for May 12, 2019, for raising funds to buy cancer drugs by Embu county government.
Image: Reuben Githinji

According to the National Cancer Institute, one in five Kenyans will develop cancer during their lifetime.

While cancer is treatable when detected early, the Ministry of Health says most Kenyans are diagnosed when it is already too late.

The NCI says the chance of dying from cancer is highest for breast, cervical, oesophageal, prostate and stomach cancers.

Breast cancer affects about 5,900 Kenyans every year, largely women, according to the Globocan 2018 report produced by the WHO’s International Agency for Research on Cancer.

Symptoms of breast cancer include a lump in the breast, bloody discharge from the nipple and changes in the shape or texture of the nipple or breast.

Treatment usually depends on the stage of cancer. Options include chemotherapy, radiation and surgery.

The WHO says the main factors that influence your risk include being a woman and getting older. Most breast cancers are found in women who are 50 years old or older.

Some risk factors you cannot change are inherited changes to certain genes.

Some risk factors you can change are: not being physically active, being overweight or obese after menopause, taking some forms of hormone replacement therapy, especially during menopause, reproductive history (having the first pregnancy after age 30, not breastfeeding, and never having a full-term pregnancy can raise breast cancer risk) and drinking alcohol.

Next most common is cervical cancer, affecting 5,250 Kenyan women every year.

This type is a malignant tumour that develops in the cervix, the lowermost part of the uterus.

It can be prevented by PAP smear screening and a HPV vaccine, which Kenya introduced last year for 10-year-old girls. There may be no symptoms but in some cases, there may be irregular bleeding or pain.

Doctors say women should receive a Pap test starting within three years after becoming sexually active, or no later than age 21.

Screening should be done every two to three years. Women aged 60 or older should talk to their doctor about whether a Pap test is necessary. Treatments available are surgery, radiation and chemotherapy.

Throat or oesophagus (the tube that runs from the throat to the stomach) cancer is the next most prevalent, affecting 4, 380 people every year. Smoking and poorly controlled acid reflux are significant risk factors for oesophageal cancer.

Treatment focuses on removing cancer through surgery. Chemotherapy and radiation may also be used.

People between the ages of 45 and 70 have the highest risk of oesophageal cancer.

Among men, prostate cancer is most prevalent, affecting 2,864 Kenyan men every year.

Symptoms include difficulty with urination, but sometimes there are no symptoms at all.

Some types of prostate cancer grow slowly. In some of these cases, monitoring is recommended. Other types are aggressive and require radiation, surgery, hormone therapy, chemotherapy or other treatments.

Colorectum cancer affects 2,316 men and women in Kenya every year. Your risk of getting colorectal cancer increases as you get older. More than 90 per cent of cases occur in people who are 50 years old or older.

According to WHO, signs and symptoms of colon cancer include a persistent change in your bowel habits, including diarrhoea or constipation or a change in the consistency of your stool.

Others are rectal bleeding or blood in your stool, persistent abdominal discomfort, such as cramps, gas or pain, a feeling that your bowel doesn't empty completely. You also have fatigue and unexplained weight loss.

According to the Ministry of Health, screening for breast cancer is available in all level 4 and 5 hospitals.

Treatment for all cancers is available at the Kenyatta University Referral Hospital, Kenyatta National Hospital and Moi Teaching and Referral hospitals.

Patients pay Sh500 to Sh1,000 per session for radiotherapy in public hospitals. Chemotherapy costs Sh6,000 to Sh600,000, depending on the drug used.

In private hospitals like Cancer Care Kenya, it costs about Sh50,000 a week for radiotherapy. For chemotherapy, the cost depends on the drug used, with most ranging from Sh12,000 to Sh200,000 per treatment.