• The club has won one tournament thus far and emerged second in two other tourneys, despite lack of funds and opposition from some parents 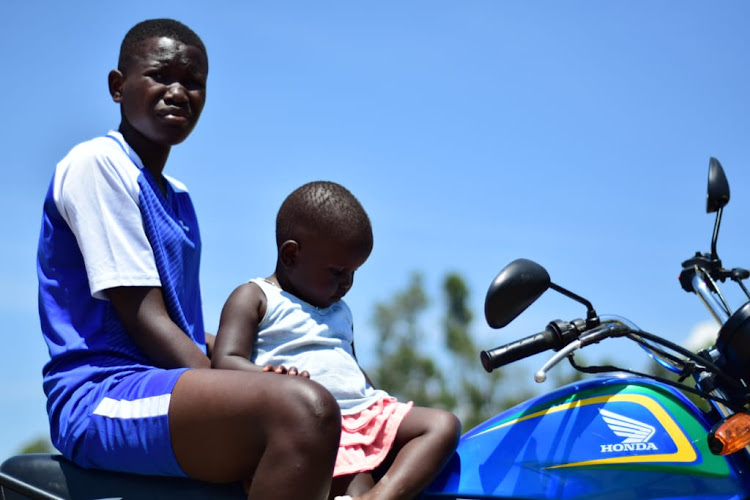 Quinter Awuor, the captain of Kisumu-based SC Ayaro, with her daughter during the interview
Image: COURTESY

2016 was a nightmare year for Quinter Awuor, 17, a form four student at Bishop Ototo Secondary School in Homa Bay county.

Then a form one student, an unexpected pregnancy threatened to derail her education and ambitions in life.

Her woes were compounded by the dire financial situation in her family and the ridicule from different quarters of her village in Chiga sublocation, Kisumu East constituency.

She is among six teenage mothers who have found a platform in SC Ayaro to showcase their football skills.

“I was caught up in poor peer influence. I had friends who did not have my best interests at heart and because of that, I got a baby. I never had anyone to control me or to counsel me,” Awuor, a centre-back by trade, says.

Similarly, two years ago, the life of Rael Ajwang, 18, seemed to have come to a screeching halt after she discovered she was pregnant.

Her strict guardian, who also would hear none of her dreams to become a footballer, contributed to her predisposition to early pregnancy.

“My guardian at that time was not understanding of my dreams. She prohibited me from going for training sessions because she thought it was an excuse to go play around with boys,” Rael, whose son is two, says.

Ironically, out of idleness, she befriended a boy in the area from whom she acquired the pregnancy.

Awuor says the team provides her with a sense of belonging and ensures her schedule is ever busy.

“The training schedule is quite rigorous. Once you finish training, you just want to go home and rest because you are too tired to engage in meaningless activities,” Quinter, whose daughter is three, says. 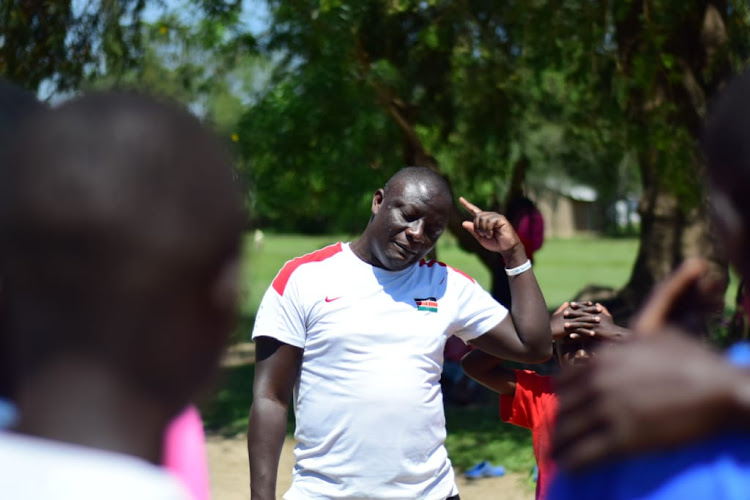 SC Ayaro was founded in 2016 by Gahk Amimo to keep girls in school by safeguarding them from bad peer influence.

Initially focusing on boys, he was approached by many local girls, asking him to establish a girls' football team.

“I was having a lot of disciplinary issues with the boys and many girls approached me to coach them instead. So I started off by lending them the playing kits I had bought for the boys’ team,” he says.

This created a furore among the boy’s team, who felt that they were being overlooked in favour of the girls, whom they felt did not have potential.

“It actually became a police case because the boys were hostile towards the girls. They felt the girls had snatched an opportunity that belonged to them,” Amimo says.

Unperturbed, however, Amimo soldiered on, determined to create a community of empowered girls by providing them with the platform to magnify their talents insofar as football is concerned.

Today, the club boasts 50 players in its ranks.

“I do not discriminate but allow girls from all areas to join the team. There are some who come from as far as Kibos and they are always punctual for training sessions,” he says.

Amimo, a former Kenya Pipeline and Sacramento FC  player, pinpoints discipline and togetherness as two values that glue the team.

“The training sessions begin at 9am during school holidays and end by 1am. I have coordinated with parents of the girls to ensure they are also in the loop about their daughters’ movements,” Amimo says.

Since its inception, SC Ayaro has had mixed fortunes on the field.

In 2016, the girls won the Make Me Smile Football Tournament in Kisumu and emerged runners-up in the Amsha Ball Kisumu tourney in the same year.

They exited the 2016 Safaricom Chapa Dimba Tournament at the first round before reaching the second round during the 2017 edition. SC Ayaro has a talent pipeline of youthful players with the potential to become exceptional footballers in future.

“I work with young girls even from the primary schoolgoing age because I want to nurture their talents at a young age,” Amimo, a graduate of Kenya Polytechnic, says.

Their exploits on the field have attracted the attention of scouts, who have been circling over the team.

Violet Mumbo, 19, is an alumnus of SC Ayaro who was signed to Women’s Premier League side Kisumu Starlets on account of her scintillating displays at right-back and midfield for her hometown club.

“I owe my playing career at Starlets to SC Ayaro because they gave me the opportunity to show my skills,” Violet says.

Diana Oduor, 16, is another player who has earned more than just a stage to display her football skills.

“I used to study at Dr Aloo Gumbi Secondary School (Kisumu county) and attend training sessions in my spare time. One day a scout came to the training ground and told us he wanted to sign us to his team and would pay our school fees,” Diana recounts.

Their achievements notwithstanding, the girls still have to meander through various challenges.

Awuor listed some of them. “We do not have enough soccer balls, bibs as well as other playing kits. Our playing ground also becomes unplayable during the rainy season,” she says.

Amimo agreed, saying he has struggled to cater for the girls’ needs as their numbers swell.

“Whatever money I receive, I often try to divide it among the girls so they can meet their needs, including school fees and sanitary pads. However, this is not enough,” he says.

Some parents have also not bought into Amimo’s vision of empowering girls in the area and enabling them to harness their talents for their benefit.

“Certain parents do eventually see sense in allowing their girls to pursue football after initially refusing. Others adamantly refuse because they believe football has no future, especially for a girl,” Amimo says.

Those who have put their trust in Amimo’s project attest to its impact thus far.

Karen Akinyi, a parent, says, “Through SC Ayaro, my daughter got a scholarship to continue with her high school education. There was a lot of discouragement that my girl was not willing to continue her education, but thank God the sponsors had faith in her and were still willing to sponsor her.”

Lack of a women’s league in the Western and Nyanza regions also compels the team to rely on tournaments as an opportunity to showcase its talents.

Despite these bottlenecks, Amimo aspires to transform the club into a centre of excellence that focuses on tapping various talents and not just in football alone.

Already, the girls are provided with counselling sessions to help them cope with the negative peer pressures they may encounter.

“Through the close relationships established with each one of them, they confide in me about their problems and I help where I can. I also have a female colleague who educates them on responsible sexual behaviour,” Amimo says.

As Winston Churchill put it, "Success is not final, failure is not fatal; it is the courage to continue that counts."

These words ring loud and true when it comes to the teen mothers of SC Ayaro.

The least they deserve is a pat on the back for their steely resoluteness to right the wrongs of their past.

Within this group lie footballers who will one day fly the Kenyan flag high as members of the women’s national football team, Harambee Starlets.