Is it really too early to sound the alarm?

The International Health Regulations, 2005, determine when to declare a pandemic a global health emergency. WHO has so far not invoked it over the coronavirus, despite its globalisation-fuelled spread

• Since the International Health Regulations came into force in 2007, WHO has, on five occasions, declared global health emergencies. 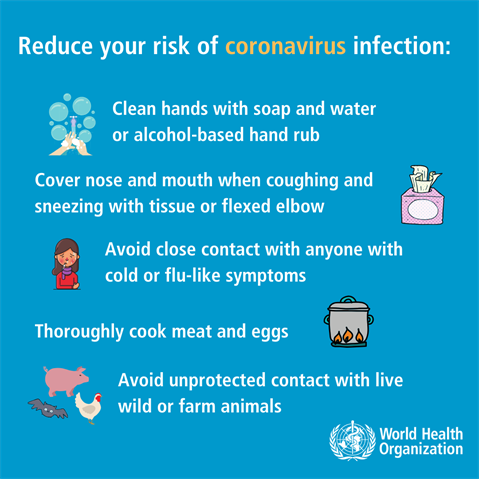 Graphic from WHO on coronavirus safety measures
Image: COURTESY

‘Today, no microbe is more than 24 hours away from the gateways of every industrialised country, and what incubates today in the tropical rainforest can emerge tomorrow in a temperature suburb.’ Nils Daulaire

Just like any other infectious disease, the 2019 Novel Coronavirus, which is thought to have originated in the city of Wuhan, China, is slowly traversing other state boundaries. This is one among the negative impacts of globalisation on public health.

While globalisation has enabled rapid response to epidemics and catastrophes (through global transportation and communications) and helped medical researchers share medical discoveries more readily, healthcare has also been negatively affected by spread of infectious diseases due to rapid movement of people across borders.

While national public health laws are efficient to tackle public health threats in any given country, the aspect of globalisation demands global and multilateral solutions to solve transnational epidemics. The need for an international response to an epidemic disease was first experienced in Europe during the cholera epidemic in the 1830s, which had spread to other countries such as China and India. This called for a need to formulate sanitation and hygiene laws, as it was discovered that polluted public water sources in London were the source of cholera.

These sanitation laws paved the way for several International Sanitary Regulations, which successfully addressed the spread of cholera and other infectious diseases. The regulations also encouraged the sharing of information about emerging infectious diseases among countries.

There are three key features of the IHR that help in achieving its purpose. One, the IHR holds a legal obligation to impose on each of the member states to notify WHO of events that may constitute a ‘public health emergency of international concern’, within its territory. Member states are also under obligation to keep sending updates as they arise to WHO.

Secondly, IHR obligates member states to develop, strengthen and maintain national capacities to detect, assess, report and respond effectively to public health risks and emergencies. Thirdly, the director-general of the WHO is accorded the power to issue temporary recommendations to the country affected by the public health emergency, such as to quarantining or isolating affected persons.

Since the IHR came into force in 2007, WHO has, on five occasions, declared global health emergencies. The first instance was in 2009 during the outbreak of the H1NI swine flu pandemic, which began in Mexico, secondly, in 2014, a time when there was a potential resurgence of polio and also when Ebola broke out in DR Congo. Zika virus, whose outbreak was identified in Brazil in 2015, was also declared a global health emergency, and the latest of such declarations was made in July 2019, following another outbreak of Ebola in DRC, which is still ongoing.

Though WHO Director-General Tedros Ghebreyesus acknowledges that the 2019 Novel Coronavirus may spread outside China, which it already has, he has not yet declared it a global health emergency. But is it really too early to sound the alarm?

It is clear that globalisation and the spreading of infectious diseases are accelerating inseparably, and as long as the inexorable force of globalisation stays, more of these epidemics will continue to be experienced. For this reason, there is a need to anticipate future global health challenges so as to react effectively.