MORE THAN TOUCH AND GO

Easy money versus weird demands: Inside world of 'massage' spas

These parlours provide lucrative employment to women willing to put up with demands that are more sexual than sensual, but some bemoan being touched inappropriately, raped or made to do 'satanic' acts

• Massage spas or parlours have been on the rise in towns, with masseuses charging Sh3,000-10,000 per client

• However, massaging skills are not a prerequisite to employment, with proprietors more interested in sex appeal and tolerance to eccentric demands 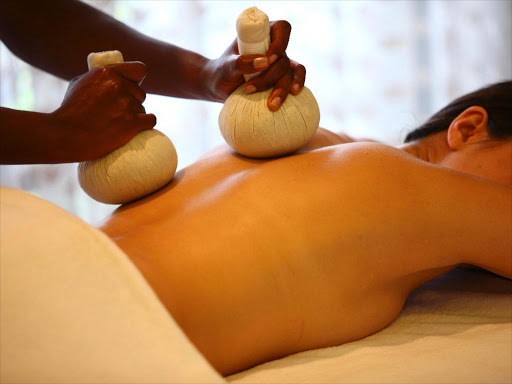 A client gets a massage at a parlour. /FILE

Getting a massage in major towns around the country is like buying peanuts in traffic. Massage parlours dot the trade centres, and all you need is money to get their services plus a happy ending, if you need one.

Anita* (not her real name) has been in this business for two years now, and she says it pays handsomely.

Speaking to the Star, she said, "I've been shuffling between Malindi and Mombasa and I enjoy my work. I work mostly in high-end areas and most clients are rich Africans and white people, especially those who visit for holidays."

Prices range from Sh3,000 to more than Sh10,000, depending on the type of massage. She gets tips from clients and in a month, she takes home between Sh60,000-Sh80,000. She uses the cash to support her mother and two siblings, who live in Makueni.

"I love working with wealthy Africans because they always ask for a happy ending and pay three times the price. The manager at my workplace is aware of the happy endings and she introduces you to what you'll be doing once you join. It's upon you to make the client happy or else he won't visit again," she said.

A line on one of the popular Kilimani massage parlours' websites reads: "Massage spa for all professional massage services. We offer all types of massage services. Call 07******," accompanied by photos of sexy foreign females.

Though illegal, it's driven by need to earn a living and high demand for casual sex.
News
2 years ago

I called quite a number of city massage parlours, posing as a masseuse looking for a job. To my surprise, most didn't ask about experience or knowledge of the job.

A woman at one of the Westlands-based massage parlours told me on the phone, "Hi, what's your weight? We only allow between 50-60kg. If you exceed that, sorry, you cannot work at our place."

I rang another number I found on an online website that had a 4.2 Google rating, and the requirements to join the city suburbs' parlour were weird.

A man who identified himself as a photographer of the establishment said, "Come with your national ID, HIV test results and be ready to take salacious photos, which will be posted on our website, some with your face showing. If you're interested, call at 9am so our cab guy will pick you at a specific place."

I called a number on one of the billboards in Kilimani and immediately after introducing myself as a woman looking for a job, the receiver told me, "Kindly send your sexy photos to this email [she read it aloud twice just to ensure I didn't get a letter wrong] and we'll contact you thereafter."

I was perplexed by the responses from the massage parlours I called and was convinced you can get anything you want under the city in the sun.

Some clients force themselves on us and when you raise alarm, the management fire you or deny you that month's salary

Just like any other profession, working as a masseuse has its disadvantages. Most masseuses face sexual harassment and contract deadly diseases if they are not careful.

Speaking to the Star, Esther 'Essy' Amani, 27, recounted her hardships on the job. "I've been sexually harassed, especially by old white men, who touch me inappropriately while in the massage rooms. Some force themselves on us and when you raise alarm, the management fire you or deny you that month's salary," she said.

"Some clients prefer home services and the dangers of such are some refuse to pay. If you don't accept their sex advances, you get assaulted and you may get raped.

"Rich old Africans, white men and Indians come with weird demands. From asking you to massage their scrotums, licking their ears to rubbing their anals, we risk contracting diseases."

"He threatened to call the cops on me and claim that I had stolen his money and I had no choice but to do it. That was the most traumatising day of my life and since then, I don't provide house services. I prefer working at the parlour. I learnt that greediness isn't good."

The profession has also attracted men who work at massage parlours, though the ones we contacted didn't want to talk.