In a new strategy, NACC has come up with a programme that aims to educate the boda boda operators and fisherfolk on prevention and safe sex 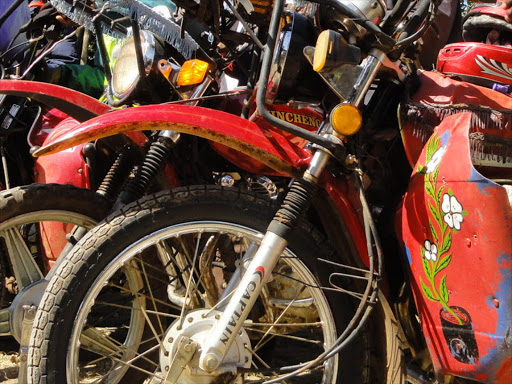 Boda Boda riders are some of the endangered population groups at the highest risk of contracting and transmitting HIV in Homa Bay county.

Concerted efforts by the national and county governments and partners have reduced the prevalence rate from 27 to 20.7 per cent against the 4.9 per cent national prevalence.

Steve Amollo, the Homa Bay and Migori National Aids Control Council coordinator, said, "We are not stopping at that. We want to ensure that the HIV and Aids scourge is reduced to the lowest level percentage possible in Homa Bay."

Amollo said they have developed a programme to educate the riders and the fishmongers on prevention and available medication.

He says the prevalence rate among youth between 15 and 24 years is alarming, necessitating a vigorous awareness campaign.

"This age group are the ones who are mainly involved in the boda boda and fishing industries," Amollo said.

In a new strategy, NACC has come up with a programme that aims to educate the boda boda operators and fisherfolk on prevention and safe sex.

The programme targets the leadership of the Boda Boda Association and fisherfolk, who will then pass the message to their colleagues, whom NACC is unable to reach physically.

“Most of the boda boda operators are in the 15-24 age bracket and, according to the Kenya HIV County Profiles 2018, they contribute to the national estimates by 10.3 per cent among youths living with HIV."

He added that this might also contribute to new infections due to the nature of their work and the money they get daily. "We are even planning to come up with moonlight medical services, where individuals who cannot get time to get our services during the day may be served," he said.

Why boda boda and fisherfolk? “The boda boda riders are at a high risk of contracting HIV-Aids due to the nature of their work and the people they interact with of all classes. These include schoolgirls, working class, commercial sex workers, fishmongers and even widows, which gives them diverse access to people," Amollo said.

He said they also have liquid cash, whereby at the end of the day, they usually have some cash in the pocket. Same applies to fisherfolk.

"These population groups have money to be spent at a particular time, and this might be tempting, which makes them vulnerable to sexual acts at any time,"  Amollo said.

Great Lakes University lecturer Joe Muriuki says the riders are exposed to women who are readily in need of cash, such as commercial sex workers and schoolgirls who might sometimes lack essential needs.

"These women know well their targets where they cannot easily miss money, and sometimes they might be tempted to engage in unprotected sex due to lack of awareness, since due to the nature of their work, the riders might not get enough time to attend to various trainings concerning safe sex and protection," Muriuki said.

The lecturer said most fisherfolk and bike riders operate away from their families, which may force them to be involved in sexual activities out of wedlock, and that is the reason they must be given correct information concerning HIV and Aids.

The lecturer said due to tight schedules in their work, the group has no time to get correct use of condoms and information concerning HIV and AIDs in health facilities.

Muriuki, who takes pride in being the first Kenyan to come out publicly concerning his HIV status after testing positive in 1989, said most riders and fisherfolk have little time with their families, and this makes them vulnerable to infections.

"Let's take, for instance, the fishermen who operate far from home. During the night, they are busy in their fishing escapades and after getting cash, most of them spend most of the day in bars. This makes them the main target of commercial sex workers, whereby they may be tempted to engage in unprotected sex after one too many," he said.

And without adequate equipped health facilities for testing along the beaches and islands, the fisherfolk may not be able to get access to the appropriate services and proper information regarding HIV prevention and medication.

"This is why NACC has decided to organise various outreach programmes for fisherfolk and boda boda riders to address vulnerability, prevention, testing, counselling and treatment," Muriuki said.

He blamed widespread stigma against those living with Aids and HIV for hurting people's willingness to be tested and their adherence to antiretroviral therapy.

The lecturer advised the riders and fishermen to invest their little earnings and form saccos, saying it is the trending industry in the country and can improve the economy.

Moses* (not his real name), one of the officials of a boda boda group, admitted that he has never gone for HIV testing, despite being engaged in unprotected sex in the past.

He said their targets mostly revolve around young, desperate schoolgirls, who might not be expensive to maintain. He, however, said some of their members prefer commercial sex workers, whom after the act do not need daily maintenance like having a permanent girlfriend or wife.

Homa Bay has lately been ranked number two in terms of teenage pregnancy after Narok county. Boda boda operators have been blamed for the trend, whereby they target schoolgirls with free rides and small gifts, such as pocket money.

"The most affected lot are the day schoolers, who have to trek to various institutions every morning," Moses said.

Jaboya (fish in exchange for sex) is another issue that has always increased HIV infections along the lakeside county. However, things are now changing for the worse.

When the NACC officials visited one of the beaches at Sindo trading centre, they realised that Jaboya is being supplanted by Puk Iyier, which translates to dispose and select. This involves rich female fishmongers cohabiting with young boys, whom they pay handsomely for sexual maintenance then get rid of and pick on a new catch.

The women no longer depend on Jaboya for sexual satisfaction but already have proper connections, whereby they get enough supply and only keep the boys as they wait to deliver their supply.

This has been attributed to the increasing number of women, especially widows, who have some cash and need sexual satisfaction from the young men.

Fisherman Owino* said, "It is true that in some of the beaches within Homa Bay, the Jaboya issue no longer exists. But a new trend has emerged, whereby rich fishmongers prey on young men for sexual satisfaction.

"Before fishermen used to take advantage of the women who had to offer sex in order to get some catch. However, at Sindo, things are different."

Owino said these women look for young boys who are struggling to make ends meet, give them accommodation and some upkeep money, and their only duty is to offer sex. However, when she feels like having another one, the young man is forced to leave.

Mary Nyakiawe* a fishmonger who has been at the lakeside town for close to 20 years, said the new trend might affect most young men and might even lead to an increase in HIV infections.

She said she has witnessed women who do not belong to the community exchanging boys in their rented houses. The main worry is, are they using protective gear?

"These crop of women whom some supply even fish upto Mombasa provide, everything to these young boys; they even decide for them when to stay and when to leave before picking another one for a stay," she said.

" We have raised the issue with the local administration and the Beach Management Unit and they have promised to take action," she said.

"These aged women do not have husbands and no one is sure whether they are widows and what exactly cased the death of their husbands,if immediate action is not taken,we are a worried lot that our young men and ladies might be wiped out by this killer the disease since these boys with the little cash they get from the sugar mummies will lure young girls into sex."

However, Amollo said as NACC, they are planning to roll out a programme to educate the young men against co-habitting with single mothers.