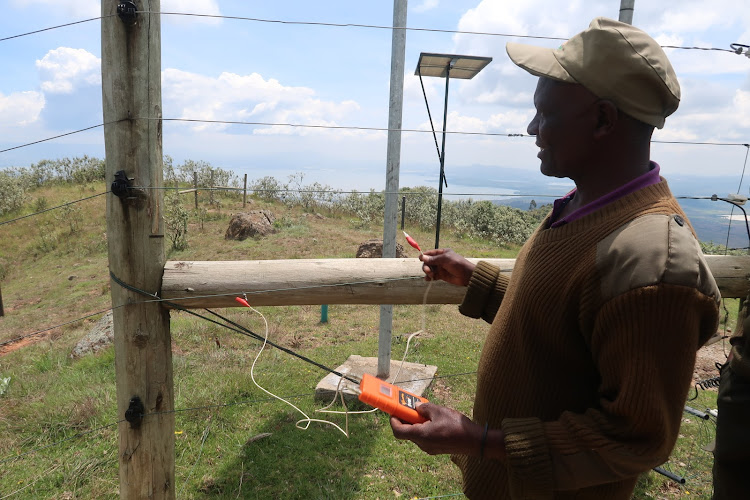 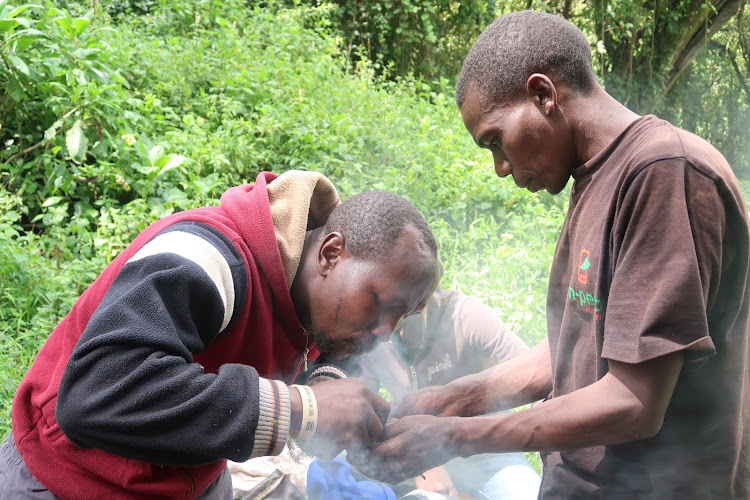 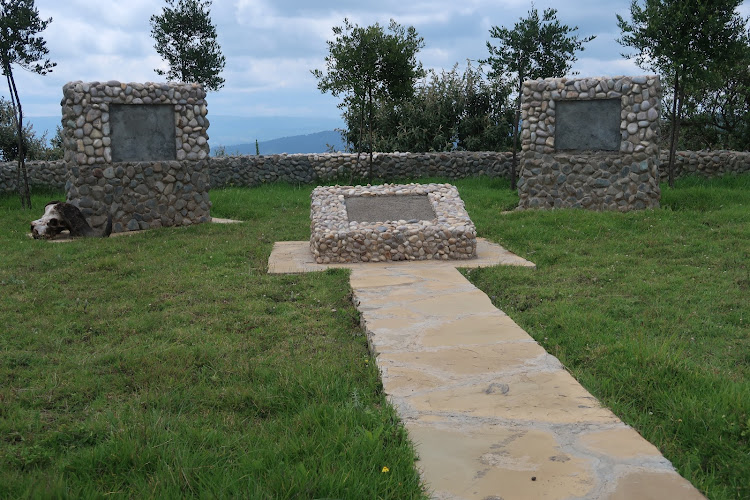 The site where one of the poles blessed by Pope Francis will be erected.
Image: Courtesy 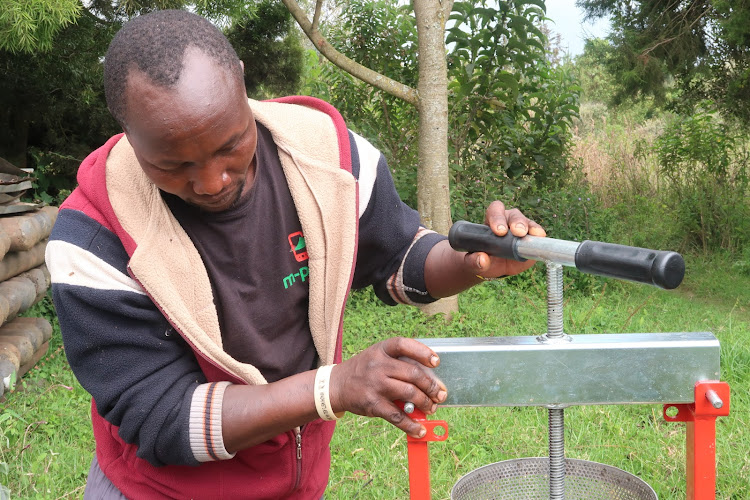 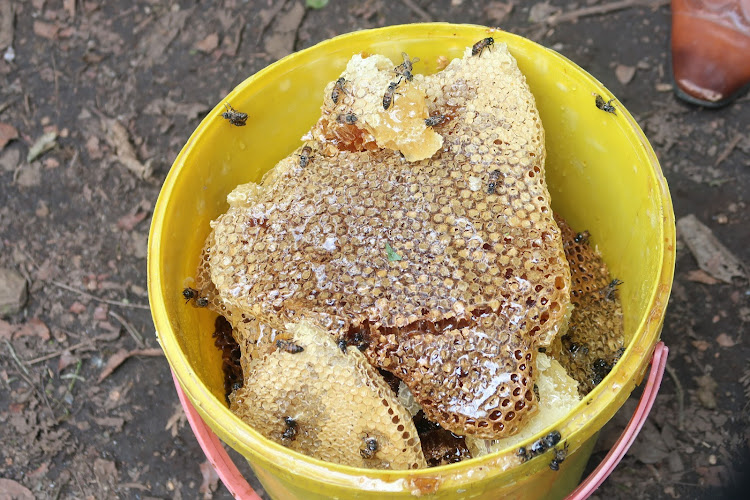 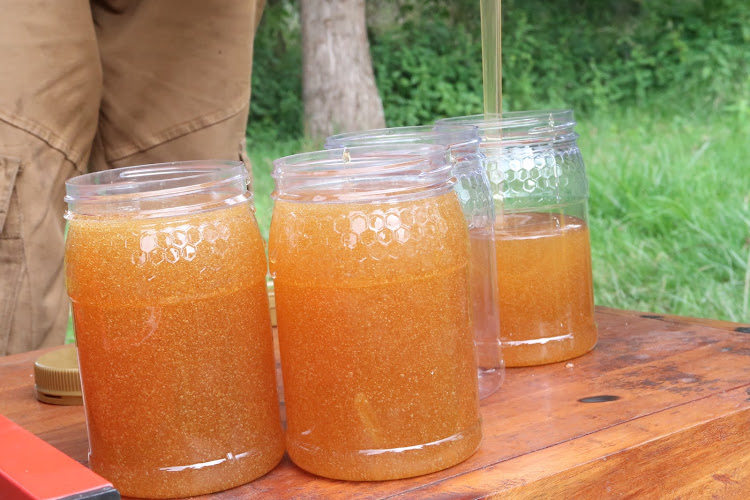 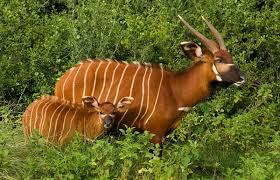 A Mountain Bongo with her calf.

The road to Mau Eburu Forest is narrow, with many twists and turns.

The forest is nestled within the steep slopes and deep valleys that make up the active volcanic Mt Ol Donyo Eburu. From a distance, it looks desolate following decades of destruction meted on it.

Although relatively unknown, the forest is a water tower and a haven for biological diversity. Mau Eburu Forest overlooks Lake Naivasha to the south-east, Lake Elementaita to the north and Lake Nakuru to the north-west.

The forest has six nature trails. At the highest point, one gets to see a nice view of a forest canopy and the classic volcanic cone of Mt Longonot.

To the north is a panorama to behold, spreading across Soysambu Conservancy. The beauty of the indigenous trees also steals the show.

Maseto Kosen is quite knowledgeable about the trees. He is a member of the Ogiek community.

The Ogiek are hunter-gatherers who solely depend on the forest for food, medicine, shelter and preservation of their culture.

The community used to live in groups and clans. To them, their indigenous knowledge of caring for the plants and animals is king.

"I have lived here ever since. My parents taught me how to keep bees," Kosen says.

Kosen says were it not for Rhino Ark fencing off the forest, it would have been wiped out. He says the forest was dense in the 1980s and was inhabited by hundreds of wildlife.

Kosen, 46, is a father of seven. He says his parents taught him beekeeping when he was a small boy.

He has already passed the knowledge on to his six-year-old son, who currently has seven beehives. His son does not need any assistance to harvest honey.

The destruction of the forest in the early 1990s was saddening to watch, Kosen says. "This forest was the main source of charcoal as charcoal from indigenous trees is of the best quality," he says.

Kosen says were it not for Rhino Ark fencing off the forest, it would have been wiped out. He says the forest was dense in the 1980s and was inhabited by hundreds of wildlife.

"We cannot be attacked by wildlife as we have stayed with them since time immemorial," he says. Mau Eburu is now a mere isolated fragment of the vast Mau Forest ecosystem.

The Mau Eburu Forest has already been fenced with an electric fence that is 43.3km long.

"We now have a platform for collaborations of different stakeholders in government and private sector for expertise and resources to support the ecosystem," Kihiu says.

He says a lot of work needs to be done to rehabilitate the forest. Kihiu says the communities adjacent to the forest must also be provided with alternative livelihood compatible with conservation such as beekeeping.

The forest has 10 official gates to monitor those entering it. Kihiu says the fence has significantly reduced human-wildlife conflicts.

Previously, buffaloes, bush pigs, olive baboons and other crop-raiding wild animals would go into farms and destroy nearly all the crops.

The fence, which is maintained by a team of 12 from the Kenya Forest Service, is powered by solar energy. The team has state-of-the-art equipment to monitor the status of the fence through the use of sensors.

Kihiu says one of the three poles blessed by Pope Francis when he came to Kenya in 2015 will be erected at Eburu. Seven olive trees have already been planted at a specially prepared site, which will be a place for special ceremonies such as meditation.

Kihiu says the other two poles will be erected in the Aberdares and Mt Kenya.

He says a special kind of corridor was designed for ease of movement of wildlife.

Kosen says the fence has improved his source of livelihood—the forest. "I have over 500 beehives inside the forest," he says with a wide smile.

Kosen, who helped fence the forest, says he understands it inside out. He says there were hundreds of indigenous trees before the wanton destruction of the '90s.

He harvests his honey with modern equipment donated by Rhino Ark. Before he would use boiling water. "It was cumbersome," he says.

The downside to his happy story is he has no ready market for his abundant harvest.

The Bongo is large, reddish-brown forest antelope with narrow white stripes (12-14) running vertically down its back. It has a dorsal mane that erects when alarmed. Bongos are mostly nocturnal but occasionally are active during the day. Adult males normally avoid each other. Their encounters are characterised by ritualised sparring using their horns.

The critically endangered Mountain Bongo is only found in Kenya. They are believed to be fewer than 200 left.

"There were hundreds of Mountain Bongo before the destruction," Kosen says. Thanks to the fence, they have started to flourish.

The Mountain Bongo is found in parts of the Aberdare and Mt Kenya forests east of the Great Rift Valley, and in small numbers in the Mau Forest.

Photographic evidence of the species in Eburu Forest was collected by the Bongo surveillance unit in 2010.

The Bongo is large, reddish-brown forest antelope with narrow white stripes (12-14) running vertically down its back. It has a dorsal mane that erects when alarmed.

The bright colour of the male becomes darker with age. Both males and females have lyre-shaped horns. Those of males are stout, measuring approximately 75cm while those of females are slender. When in distress, they emit a bleat.

Kihiu says a specialist group from the International Union for Conservation of Nature toured Eburu with a view of having it converted into Bongo sanctuary.

On July 8, 2019, KWS launched a National Recovery and Action Plan for the Mountain Bongo in Kenya (2019-2023). The action plan was launched at the scenic Mt Kenya Wildlife Conservancy in Nanyuki, Laikipia county.

During the launch, Tourism CS Najib Balala said the goal of the plan was to grow the current population of Mountain Bongo from 96 in the wild and 77 in Mt Kenya Wildlife Conservancy to 750 in 50 years, by prescribing specific actions aimed at addressing the threats facing the species.

Bongos are mostly nocturnal but occasionally are active during the day. Adult males normally avoid each other. Their encounters are characterised by ritualised sparring using their horns.

Bongos reside in impenetrable forest with dense undergrowth up to an altitude of 4,000 metres. Their food mainly comprises foliage of young trees and bushes, as well as decaying wood from fallen trees and rotten fruits.

Bongo use their horns to dig up roots and sometimes stand on their hind legs to reach for vegetation. Young Bongo are vulnerable to pythons, leopards and hyenas, while lions kill adult Bongo for meat.

The greatest threat to the species, however, is humans, who hunt the animals with dogs and snares. Bongo is also susceptible to diseases such as rinderpest.

They were driven to extinction by hunting and disease.
News
3 years ago

Rhino Ark boss: We are proud to play role in saving water towers

Christian Lambrechts, executive director at Rhino Ark Charitable Trust, spoke to the Star ahead of tomorrow’s 30th anniversary of Rhino Ark and ...
News
4 years ago
Post a comment
WATCH: The latest videos from the Star
by GILBERT KOECH News Reporter
Big Read
03 December 2019 - 05:00
Read The E-Paper