• Most young people are unemployed, underemployed or underpaid, placing them in the ever-growing ranks of Kenya’s working poor and making them susceptible to crime.

• Inspector Njuguna set up Boots and Brains to reach out to children and encourage them to resist crime and offer them life skills.

The National Police Service is loved and hated in equal measure for its handling of crime.

In many instances, officers opt to terminate those they deem a threat to security. It is said many officers would go to great lengths to avoid taking suspects to court to face justice. In many cases, the officers trail the suspects, issue them with several warnings then take them out if they refuse to listen.

The problem of youth crime can be traced back to the colonial period.

A report by the National Crime Research Centre indicates that the imposition of colonial rule was met with a lot of resistance from the Kenyan communities, with the youth being at the forefront of this struggle.

Consequently, the youth were labelled “problematic and lawbreakers” by the colonial masters. The main crime reported to have been committed by the youth was the failure to carry identity cards (kipande).

In response, the colonial government introduced the Ministry of Community Development in 1945. Its main mandate was “youth containment”. To tame rising youth crime, a series of corrective institutions and approved schools were opened in the 1950s and 1960s.

With the rapid population growth in the 1970s and 1980s, the youth increasingly became marginalised. This was followed by a sharp increase in the number of youth convicted to prisons.

According to the Aga Khan University Report 2016, 80 per cent of Kenya’s population is below 35 years. 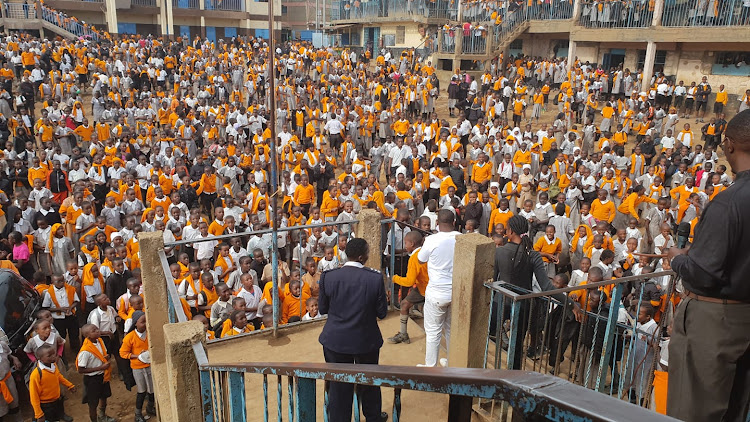 Despite being the majority, concerns have been voiced that youths are often placed at the periphery of the public sphere.

Consequently, most young people are unemployed, underemployed or underpaid, thus, placing them squarely in the ever-growing ranks of Kenya’s working poor.

The report indicated that apart from unemployment, the youth have cited a litany of other key challenges that continue to threaten their human dignity.

They include non-responsive education and training befitting the prevailing market needs; weak institutions responsible for youth development; low involvement, participation and representation of the youth in decision-making processes; and limited access to health facilities.

This makes them vulnerable to turning to crime.

In Nairobi’s Githurai area, we meet Inspector Caroline Njuguna, who is in charge of the crime desk. She was posted to the hardship area on her fist assignment after pass out.

Here she encountered youths abusing drugs and engaging in crime. Njuguna was touched and started looking for a solution.

Having lost her father in 2016, Njuguna made a vow to continue with her dad's legacy in helping the society be a better place.

Having started charity at a tender age, the father was the patron of the good Samaritans school in Thika Kiandutu slums from the year 1990.

The school was dealing with rehabilitation of street children and orphans affected by HIV/AIDS epidermic.

She said having started her own charitable organisation then, she thought the same experience would be deployed to deal with criminal cases.

Police officers in Githurai are grappling with increasing criminal activities carried out by organised gangs and teenage gangsters.

It has a population of about 800,000 residents but remains a troublesome area, police say. With a mixture of slums and suburbs, no day goes by without reports of murder, robbery, carjacking, etc. Inspector Njuguna says at her station, about 100 cases are recorded in the Occurrence Book. 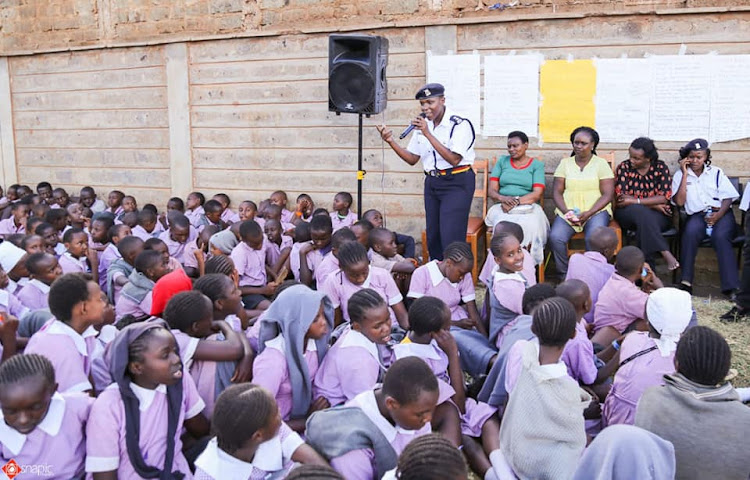 The emergence of teenage gangsters and the high number of child-related offences is of especially worrying concern to the officers.

Njuguna told the Star in an interview that cases range from robbery, drug peddling and abuse, rape, defilement, incest, sexual harassment, sodomy, bigamy and incidences of consensual sex between children.

She says her station, with about 100 police officers, is overstretched. “This area is resided by the middle class who have been absorbed by daily hustles. Many parents have neglected their children since they have to do something to put food on the table,” she says.

As a result, children are left idle. To keep themselves busy their only option is crime while others engage in sex.

A report by the international organisation Medicines San Frontiers (MSF) - Doctors without Borders – in 2017 revealed that Githurai Kimbo has one of the highest sexual violence prevalence in Nairobi.

Inspector Njuguna is of the opinion that it's better to prevent crime than to punish. “Taking the victims to courts is not enough, we need to empower and sensitise them on why such activities may tamper with their future,” she says.

“The community has neglected its role in preventing insecurity. They think it is all about police, but the truth is they play a fundamental role in the same.”

For instance, Njuguna says, it takes too long to report crimes such as rape, defilement and sodomy, by which time the evidence is already lost or tampered with.

This is what drove the 30-year-old wife and mother of one daughter to reach out to young people.

Inspector Njuguna is a graduate of Kenyatta University with a Bachelors degree in Counselling psychology and Gender.

She is also a graduate of the University of Nairobi  with Master project planning and management.

She is currently pursuing her PhD in Security studies at the Kenyatta University.

A graduate of criminal law and a counselling psychologist, she mobilised fellow officers and started an initiative called ‘Boots and Brains’.

The officers visit primary and secondary public schools to talk to teenagers on the consequences of drug and substance abuse, sexual offences, joining gangs, etc. They also offer life skills.

“As a counsellor, I could sit in my office, listen to these cases and sometimes shed tears. I told myself I can do more than just matters of law and offer something that may be of great value, and that was to find these young people and talk to them,” Njuguna says.

Since the start of the year, Njuguna and colleagues have visited all the public schools in Githurai Kimbo and hope to cover the entire Githurai.

“We started small and our target was public schools where discipline is always an issue. But we have received invitations from several private schools. This is a clear indication that much more needs to be done for our children to be an informed generation,” she says.

Their efforts have borne tremendous fruit.

“Several children have already come out to admit to being victims of sexual assault. We have moved swiftly and assigned officers from the children’s department who have either made arrests or lodged formal reports with relevant offices,” she says.

“For the victims, we have devised mechanisms to ensure they are not victimised because most of the perpetrators are close family members”.

As Boots and Brains, we are volunteering to unveil our students' potential, motivate and support them into becoming the leaders through discipline, life skills

For instance, during their first school visit, a Standard 6 pupil told them in a private session that his father used him to peddle drugs.

The officers immediately placed him under protection and moved swiftly to talk to the parents who have since reformed.

In the same school, Njuguna says, many victims of sodomy and sexual harassment narrated their agony in the hands of those close to them.

“We can be a better society if each one of us did their part. Whenever you find yourself on the side of the majority, it is time to pause, meditate and reform,” she says. 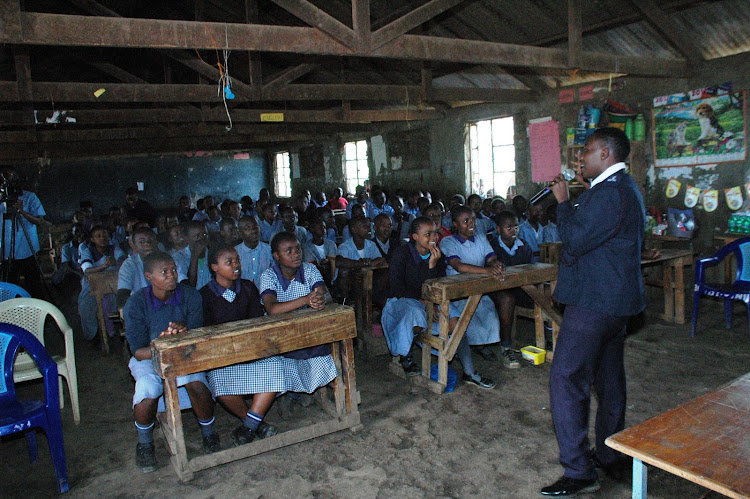 “When you purpose to do something, or notice a gap you can fill, go ahead and give it your best shot. Change begins with an individual taking a step towards the right direction.”

This is the driving force behind her urge to reach out to schoolgoing children and young adults.

Her greatest challenge is limited resources to facilitate the initiative.

Ruiru deputy OCPD Edward Ndirangu says officers are impressed with the initiative and its gains.

He says the county commissioner and OCPD are aware of the initiative and have assigned Njuguna officers from the children’s department to hold private sessions with the children.

“We have made sure that her desk in the department has no vacuum whenever she has forums to attend,”  Ndirangu says.

He says security is not the preserve of police officers but a collective responsibility. Ndirangu says officers have been able to prevent some crimes thanks to information gathered from their interactions with the children.

“These youth interact with some of the criminal elements that the police are looking for. In that regard, in one way or the other they have provided critical information that has led to numerous arrests,” he said.

One challenge, however, is that some children warn the criminals, helping them evade arrest.

His counterpart at Githurai 44, Jane Wanjiku, says they are engaging with church elders with a view of extending the forums to churches. She says the programme needs to keep running even on school holidays. 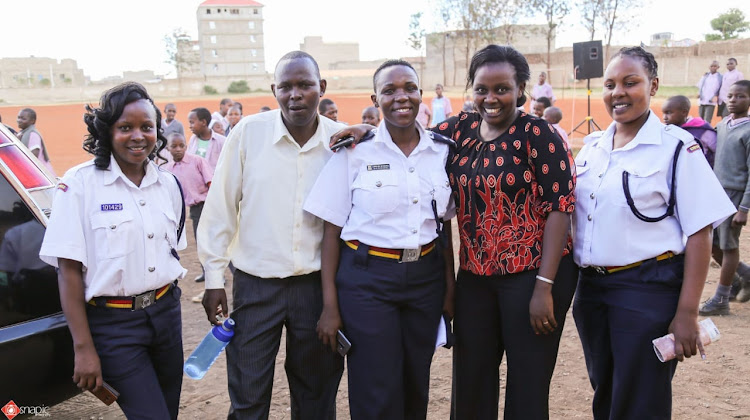 Inspector Caroline Njuguna with her colleagues

“It is effective when pupils get advice from a uniformed officer who understands the law rather than teachers whom they are used to,” she says.

Jane Mbogo from Uhuru Primary School says there should be more such initiatives across the country.

A youth from Kimbo who was reformed through the initiative, Daniel Ng'ang'a, says since they began interacting with the police crime has gone down.

“In the past, it was all bullets and running battles. It was hard for us to discuss any matter with the police. It was them against us,” he says.

“But since Njuguna reached out to us in our hideouts, things have changed for the better. It was evident that police actually care about our lives, security and children. We are here supporting this cause to ensure that our younger brothers and sisters do not take the wrong path.”

Post a comment
WATCH: The latest videos from the Star
by SHARON MAOMBO AND PATRICK VIDIJA
Big Read
29 November 2019 - 05:00
Read The E-Paper