• Households drain their raw sewer into disused treatment ponds, where land grabbers have dug trenches to direct the faecal matter into rivers

• Moreover, most tenants have dug shallow pits, which are used as latrines. Once filled up, they use street boys to empty faecal matter into nearby streams at night 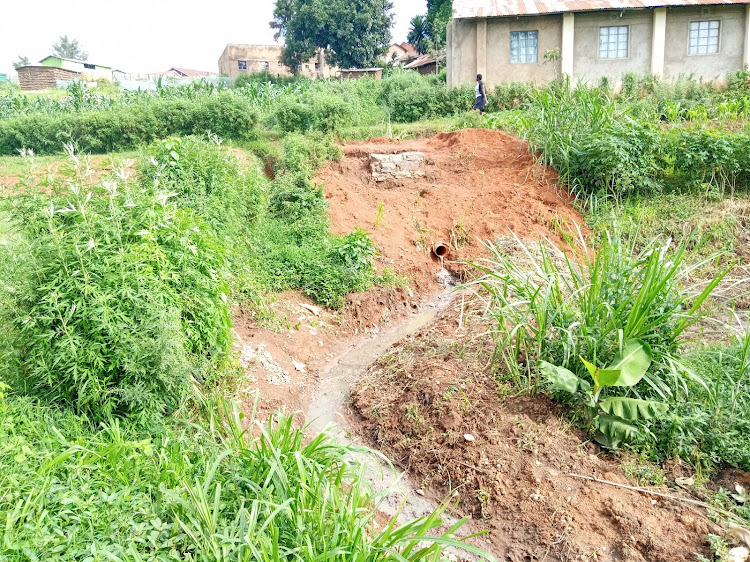 A section of the disused sewer ponds in Kakamega where households discharge raw sewer despite there being no treatment that drains in a near by ravine that is the source of Scheme river
Image: HILTON OTENYO

It could easily pass for a farm. Maize growing on one side, a construction site coming up a few metres away, and a steep ravine that is the source of one of the streams that begin from the municipality.

This is the site that was formerly Nabongo sewage treatment ponds in Kakamega town.

Pupils from the nearby Nabongo Primary School trot in a queue with small containers to draw water from a stream that begins from the ravine next to the disused ponds.

Some, seemingly thirsty, begin seeping from their containers, oblivious of the raw sewer discharging into the ravine that is the source of the stream.

We move into the gully. Here we encounter Mzee Aziz Muhande, harvesting his Napier grass in the ravine. He is distraught as he explains the lurking danger posed by the pollution.

“We are living by the grace of God. I keep blocking a trench the developer who tilled these ponds directed to the ravine, where the river begins, to avoid the flow of raw sewer into the water source, but he opens it at night,” he said.

Muhande, 60, says they have reported the discharge of raw sewer into the stream to the authorities, but no action has been taken to date.

Despite the ponds remaining unused for close to 10 years, households have made a habit of draining their raw sewer into them. As a result, individuals who have grabbed the land keep digging trenches to direct the faecal matter into the rivers. This has led to frequent sewer leaks within the town due to backflows.

“Some organisation came here a year ago and carried out analytical tests on the spring water next to this stream,” he said.

"They returned a verdict that the water was contaminated and unfit for human use, but people here have no alternative and continue using the water."

Last year, an outbreak of cholera at Masingo slum claimed three lives and left others hospitalised. However, the country government alleged the victims drank contaminated alcohol (chang’aa) that led to diarrhoeal infections.

Kakamega town could be a disaster waiting to happen. Households in Site and Service Scheme Estate, Jua Kali estate and the sprawling Masingo slum discharge raw sewer into streams that emanate from ravines in the town.

The streams drain into rivers Isiukhu and Lwatingu, used by people living on the outskirts of the town for water both for domestic and agricultural use, exposing them to the danger of diarrhoeal disease outbreaks.

Nominated MCA Scolastica Ngina counts herself lucky not to have been infected after consuming the water unwittingly.

“When I shifted from town to my current residence, my children and I used the water from the river, unaware it was contaminated with raw sewage. God forbid,” she said.

“Most tenants have dug shallow pits, which are used as latrines. Once filled up, they use street boys to empty faecal matter into nearby streams at night,” said a resident at Maraba estate who feared being named.

“We have some who have their pits designed in a way that they have a closed outlet facing the streams. These are opened when they are filled up to empty the raw matter into the stream at night.”

Malala said his office had issued a notice to the Kakamega Water and Sanitation Company to fix the sewer, failing which legal action would be taken against the government.

“It’s a nuisance and must be fixed immediately. We have given the water company a notice to the same effect and if they don’t act, we shall move to court. It’s not our duty as public health to maintain the sewer system,” he said.

Malala says the rampant sewer issues in the town have been caused by the growth in urban population without expanding the sewer system.

However, a solution does not appear any closer, as county government officials pass the buck over the looming disaster, as though it is a hot brick that no one wants to touch.

Urban Planning executive Alfred Matianyi and his Environment counterpart Barasa Wangwe passed the buck as to who should deal with the sewerage issues.

While Wangwe argues that sewerage falls under the Urban Planning department, Matianyi insists the Environment department must take responsibility for the messy sanitation.

“We do planning of the town but we have a company that manages the sewer issues. They have a budget for the same,” Matanyi said.

"You cannot say you are supplying water and forget about the sewer when it’s known that after use, the very water becomes sewage. We don’t have the capacity to manage sewer as the Urban department.

“We have the Water and Sanitation Company, which falls under the Environment department, and they must take responsibility and fix the mess.”

The water company CEO, Fred Atwa, said the issues can only be resolved by the Urban Planning department since the ponds have been encroached on by developers.

“As far as I am concerned, the ponds at Nabongo were not decommissioned because there is no documentation to that effect. It is people who have encroached on the ponds. If there was any decommissioning, what alternative was given?” Atwa said.

He said the Water Trust Fund intends to rehabilitate the ponds, but reports that they were decommissioned remain a challenge since there is no documentation.

He said the ponds could only have been decommissioned if the stalled Maraba sewer works was completed and functional.

Atwa said only the Urban Planning executive can remove the grabbers who have taken over the land, so the company can retake it and rehabilitate.

An alternative sewer treatment plant was to be constructed at Maraba area along River Lwatingu, but the Sh800m project stalled after the community sued the county government for failing to carry out public participation.

The financier, the Germany government through GIZ, withdrew in 2014. The lagoon that had already been excavated has since filled up. Despite, this, some new developers have connected their sewers to the system, leading to the discharge into the river. 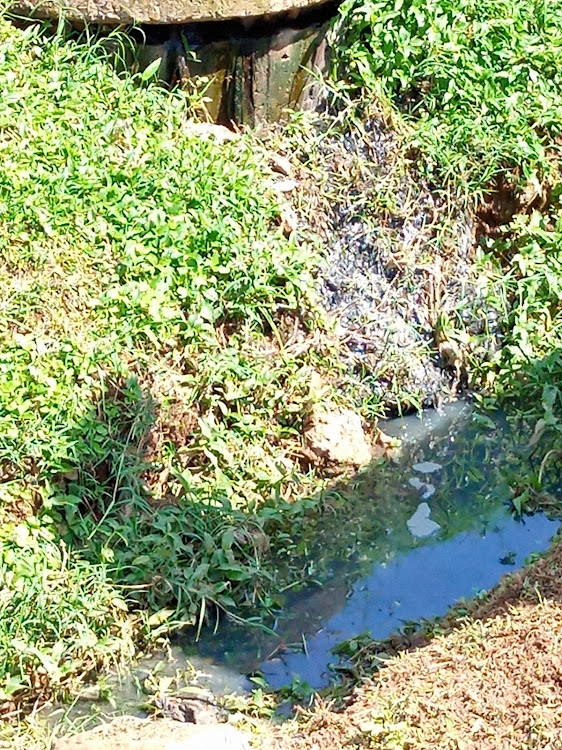