Seventeen years ago, then presidential candidate Uhuru came from the skies in a chopper and took a boda boda in Teso.

• When Uhuru campaigned for presidency in Teso, Busia county, in 2002, he took a boda boda for the first time in his life

• Since he eventually won it in 2013, the rider has visited Nairobi four times but has not been allowed to enter State House to meet the President 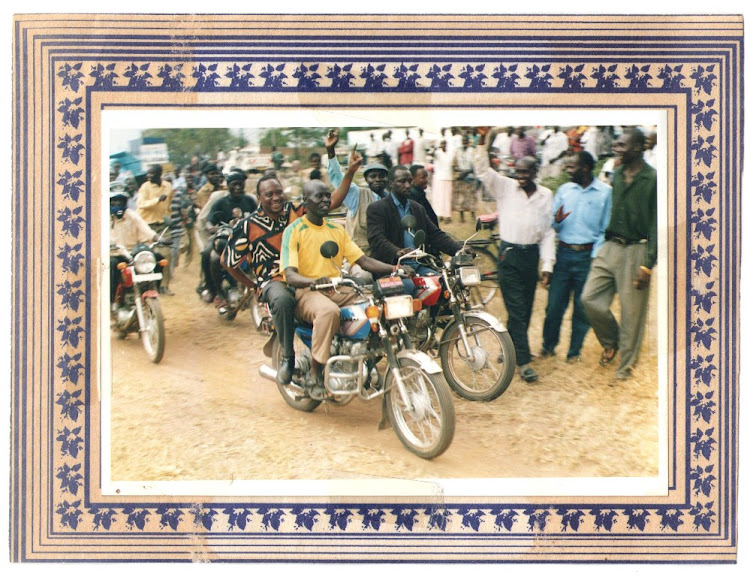 “I never imagined I would ever get anywhere close to a Cabinet Minister, let alone President,” are the words of Donald Omai, a man from Busia county who will go down in history as the first boda boda rider to carry Uhuru Kenyatta on a motorbike.

The 2002 presidential campaigns were in high gear as opposition leaders, led by Mwai Kibaki, ganged up against independence party Kanu. They wanted to ensure it did not produce the Head of State after the general election.

Uhuru was the Kanu candidate, despite being a political novice recently nominated to Parliament and appointed Local Government minister.

There was growing opposition to his candidature ahead of the poll because of accusations of runaway corruption that characterised his political mentor Daniel Arap Moi’s regime. Kenyans were worried that Uhuru’s presidency would turn out to be a continuation of Moi’s reign.

The opposition mobilised and strategised on how to tackle the man who had the backing of the then Commander in Chief, using all avenues to gag his efforts of becoming Kenya’s third President.

As the events unfolded, Uhuru found himself campaigning in Teso, a far-flung district located over 400km west of Nairobi. It is this visit that will forever remain etched in Omai’s mind. He has been in the boda boda business for 18 years now, but that moment is the highlight of his career.

“I was the chairman of Teso District Boda Boda Association, and Hon Albert Ekirapa was the MP for Amagoro,” Omai, 49, said when the Star interviewed him.

“Prior to the visit, Ekirapa called me and said Uhuru Kenyatta was scheduled to visit Amagoro. He told me to organise my colleagues because I was their chairman so that we give him a warm welcome. I mobilised my boys and we were 50 in total.”

The boda boda business at the time had not started flourishing. Only a few commercial riders had motorcycles, the rest were on bicycles.

As we were driving towards the hotel, he asked my name and I told him I am Donald Omai. He told me since he was born, he had never boarded a motorcycle

Before Uhuru's visit on May 4, 2002, Moi had campaigned for his would-be successor in different regions of the country, where he called on voters to support Uhuru for President.

Moi, who was also Baringo Central MP, was nearing retirement and was burning the midnight oil to ensure the man who hails from Gatundu South succeeds him. He had on various occasions indicated Uhuru was his best replacement.

In Amagoro, Omai, like a busy bee, galvanised support for the Kanu presidential candidate as he had been tasked by Ekirapa.

“We got clearance from the District Commissioner to welcome him as planned," he said.

Ekirapa had called and given me instructions that my colleagues who would welcome him were those with valid driving licences,” Omai said.

There was heightened activity during the last two days to the tour as Omai held meetings with his colleagues, planning how best to welcome Uhuru.

On the day of his arrival, the helicopter he was travelling in landed at Amagoro Polytechnic grounds.

“He alighted and came straight to my motorbike and boarded because I was strategically standing facing the helicopter door. I was so delighted,” Omai said.

Their convoy snaked along the Malaba-Bungoma Highway to Amagoro Deep West Hotel, where Uhuru was scheduled to meet councillors (now MCAs).

“As we were driving towards the hotel, he asked my name and I told him I am Donald Omai. He told me since he was born, he had never boarded a motorcycle," Omai recalled.

"He said he was happy to have boarded one for the first time while in Teso.”

Later, as the meeting at the hotel proceeded, security officers had to ensure Omai’s motorbike was well guarded to guarantee his ‘new friend’s’ safety. 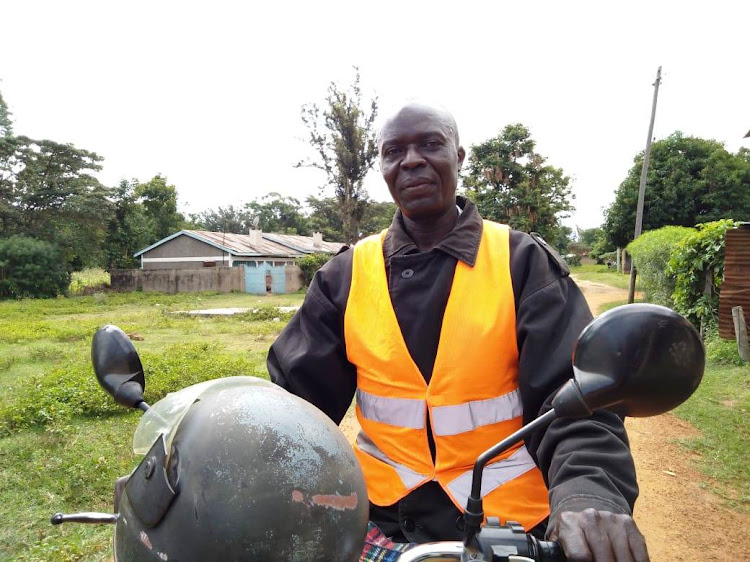 “After the meeting that lasted for an hour, Uhuru told me to mobilise youth to campaign for him," Omai said.

"He also told me because I carried him when he first boarded a motorbike, he would invite me to State House if he became President."

Uhuru was then ridden from the hotel to his chopper. As they rode, hundreds of youth lining the road waved the one-finger Kanu salute to show their solidarity with Omai's newfound ally.

“He smiled all the way as he waved back to them, while riding on the motorcycle," Omai said. The rider, who was a photographer before he joined the boda boda business, made sure to capture the moment on camera.

Unluckily, Uhuru did not make it to State House after the vote, as he was trounced by the Opposition, and then Othaya MP Mwai Kibaki was elected President.

After the poll, Omai's dream of ever setting foot in State House vanished, until 2013, when Uhuru took another stab at the presidency.

A few days to polling day, his fingers remained crossed, praying that the son of Jomo becomes President for him to actualise his vision of visiting the house on the hill.

And, true to his desire, Uhuru was elected President, beating Prime Minister and Langata MP Raila Odinga, his fiercest rival.

Omai was born and raised in the remote Kakapel village in Busia’s Teso North subcounty. He has six children, three sons and three daughters.

Since 2013, he has visited Nairobi four times, hoping he would be allowed to enter State House to meet the President, but to no avail.

In all the occasions he visited the city, he carried the picture that was taken in 2002, when he chauffeured Uhuru on his motorbike. He still has the colour photo to date.

“I realised during my first visit in 2014 that gaining access to State House is difficult. I have gone there four times, hoping to be granted access,” he said.

My appeal to the President is to invite me to State House to meet him as he had promised. I would be happy, at least before he exits power

In 2017, his dream almost came to pass when he met the Head of State as he returned to campaign in Teso.

“I had an audience with him when he came to launch the tarmacking of the Malaba-Angurai-Moding-Lwakhakha road in Malaba town," Omai said.

"I spoke to Albert Ekirapa (who was Amagoro MP in 2002) and Julius Ekirapa to help me reach him.”

Julius was Kanu’s chief campaigner in Amagoro constituency in 2002. At Malaba Primary School, where the launch was, security was so tight that he did not manage to shake hands with the President.

But after being driven to Amagoro Primary School playfield, where Uhuru was to board the military helicopter he had landed aboard, Omai managed to hand the picture he took in 2002 to the commander-in-chief.

“He was very happy and shook my hand twice, but he said he had a tight campaign schedule and that I should organise with Hon Ekirapa and ACK Katakwa Diocese Arch-Bishop John Okude to meet him in Nairobi," Omai said.

"He called his handlers and they wrote my details down but to date, I have not received any invitation,” he added dejectedly.

“My appeal to the President is to invite me to State House to meet him as he had promised. I would be happy, at least before he exits power.”

Other prominent leaders Omai claims to have given a ride on his motorcycle are former powerful Cabinet Minister the late Nicholas Biwott, Kapenguria MP Samuel Moroto and Ekirapa.