EMPLOYMENT STARTS WITH YOU

Innovate or end up ‘tarmacking’: Varsity churns out job creators

Jkuat is changing the narrative of half-baked graduates by equipping students with the skills to innovate, enabling them to find self-employment by solving problems in the society

• Jkuat is making students think outside the box; to look at problems and find solutions 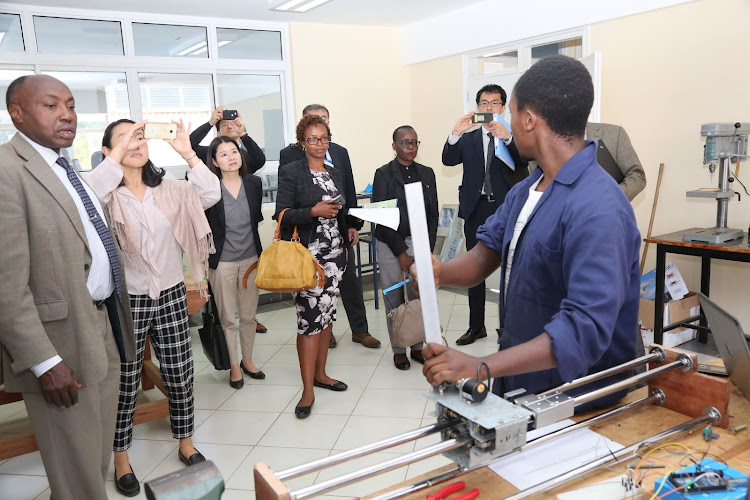 When American activist Marley Dias said innovation comes from one, acknowledging yourself; two, studying and understanding the problem; and three, finding a solution, she might as well have been referring to Kenya’s higher education setting.

Born in January 2005, Dias made headlines as a sixth-grader when she initiated the #1000BlackGirlBooks project to collect and donate 1,000 titles that featured black girls as the central character. Her drive has since yielded more than 11,000 books.

Her first book, Marley Dias Gets It Done: And So Can You!, was published by Scholastic the same month she turned 13.

Back home, education in higher learning has often been described as “too theoretical and lacking in hands-on skills”.

In fact, it is not uncommon to see a young man or woman walking in the streets of Nairobi with a placard, asking for a job. These are young university graduates who have “tarmacked” until they resorted to desperate means to get employment.

While a degree was once a ticket to the middle class, opportunities have now grown limited. Just this week, the country's conscience was pricked by the story of a straight-As student who ended up on the streets after years of tarmacking.

“Kelvin Ochieng’s story aired on Sunday by Citizen TV is just a tip of an iceberg of the thousands of bright unemployed graduates struggling to make ends meet,” George Ndisya from Kakamega wrote in a comment to the Star.

However, thanks to efforts from one university to change the culture of education, there is a glimmer of hope.

This is after students at the Jomo Kenyatta University of Agriculture and Technology showcased innovative products. The institution has 12 innovations, eight of which are ready for incubation.

The products displayed during media tour indicated that youth graduating from institutions of higher learning can actually create jobs instead of waiting for the government.

One such innovation was a land surveillance drone. It was created by Walton Twele, who graduated from the institution last year.

Fellow innovator Rose Litunya explained how it works. “It will survey the entire parcel of land before relaying information on what is happening to your laptop or even cell phone,” she said.

This saves the time one can use monitoring activities in his farm. The drone can also be used to monitor illegal activities in forests, as is the case in developed countries.

Next to Litunya was Dennis Nyabade, who has come up with a system that can be used to pay rent in bits. With the new system, called Komboa Mobile app, one can pay as little as Sh1 for house rent.

Once the transaction has been done through the app, a receipt is issued immediately, after which the tenant will be notified. “Housekeeper, too, is notified of the payment,” Nyabade said.

Tenants will also be notified should a vacancy occur. At the end of the month, the app also provides the managers with a platform where they reconcile all the payments made. “This is a transformation for low-income earners,” he said.

A short distance away was another innovator, Mwaniki Nyagah with a new innovation that will be a saviour for Kenya’s dwindling forest cover.

The new system detects illegal forest activities by picking sounds of chainsaws, cars and any other movements within the forests. It then relays the sound to another server within three to five minutes.

Once the sound has been received, it is analysed with GPS in the system, tracking the location. Short text messages will then be transmitted to the person in charge of the forest.

Armed with details of the location, which is supported by google maps and the nature of sound analysed, the ranger will easily nab the trespassers.

Other innovations include CMC milling machine, which is capable of drawing any form of message in timber or even metal. Interestingly, its innovators are finance students.

Another innovation is a unique app that helps health professionals accurately diagnose the different kinds of diseases. There is also a robot that can collect garbage.

The students also showcased a traffic control and monitoring system that can be used to enhance safety within the institution. Once a visitor is at the gate, he or she is given a device that can be tracked.

Once details of the car have been entered, one receives a text message welcoming him to the institution. Should one violate speed limits, he or she receives warnings through SMS.

She was excited and eager to start, but she ended up quitting the job after just four months.
News
3 years ago

They are job creators. They now know that they can sustain themselves instead of waiting for the government to create jobs

HOW IDEAS COME UP

Dr Peter Kihato, manager of the engineering workshop, said the students first go to the brainstorming room, where they come with various innovations. They then move to the design room, where they actualise their designs.

"After the projects have been designed, they come up with prototypes," he said, adding that engineering students do the best.

The institution also maintains most of its equipment whenever they break down since they have state-of-the-art labs.

Some of the laboratories visited included the digital fabrication unit, prototyping and invention centre, food science unit and greenhouses.

Kihato said all university staff are being encouraged to innovate. "We are ready to leave the country better than we found it," he said.

The manager said students are also being linked to industries where they can optimise their potential.

"They are job creators. They now know that they can sustain themselves instead of waiting for the government to create jobs," he said.

Kihato said students think outside the box. "They look at the problems and start thinking about solutions," he said.

"Higher education and research remain one of the key priority areas where Japan is closely working with Kenya," he said.

Sugimoto noted that Jkuat, which was established through a technical bilateral cooperation between the governments of Japan and Kenya in 1981, had emerged into an important institution of human capacity building for Kenya and Africa.

As a way of further enhancing Kenya-Japan relations, the official said Jica is keen to diversify its support to Kenya by promoting collaboration with Japanese private sector players.

Nowadays, it is not uncommon to see a young man or woman walking in the streets of Nairobi with a placard, asking for a job. These are young ...
News
3 years ago

To harness some of the innovations, Jkuat is producing juice, yoghurt, ice cream, butter and geese for local consumption. They do not sell outside the institution as lack of enough raw materials limits them.

The institution also has sausages, honey, bacon, tomato sauce, jam, among others being produced by students.

Production technologist Wilfred Kinundu said over 5,000 community members have been trained at the institution on value addition. "The programme is customised, we train them for two weeks," he said.

At the institution is also a state-of-the-art greenhouse, which is used to grow cherry tomatoes and strawberries.

The project, implemented by Jkuat in collaboration with Japan-based company Wago, focuses on the production of Japanese strawberries and cherry tomatoes for the Kenyan market. The greenhouse facilities and equipment are valued at Sh10,126,700.

Already, Jkuat has created demand for high-quality strawberries and cherry tomatoes in the Kenyan market.

“To enhance the quality of the strawberries being produced, we introduced bees into the greenhouses for pollination,” Jkuat project coordinator Prof John Wesonga said.

With the skills learned, graduates, therefore, leave the institution with a competitive advantage over other job hunters: the ability to be their own bosses.