Could this Kenyan give the world HIV cure?

Prof Benson Edagwa went to a day school in Mbale, but is now a highly sought-after scientist working to find HIV cure

• When Laser Art is combined with a gene-editing technique known as CRISPR-Cas9, it can completely eliminate HIV from the body 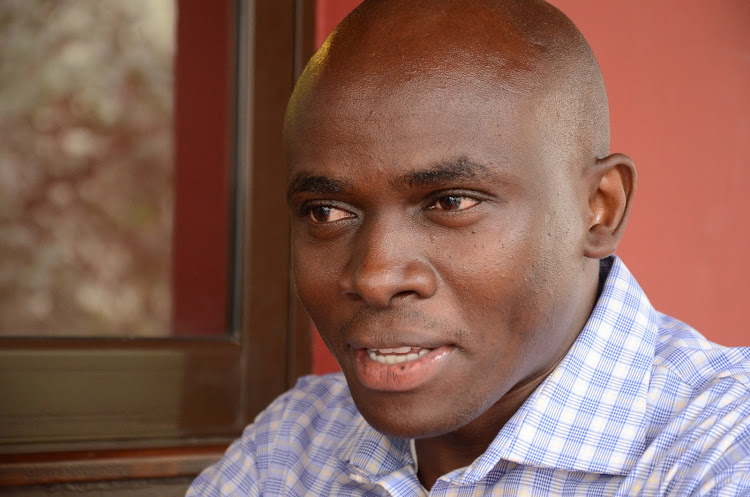 Benson Edagwa is an assistant professor at the University of Nebraska Medical Centre.
Image: DOUGLAS OKIDDY

One evening in 1997, after trudging 10km from school, Benson Edagwa was called aside by his late father, a chief and maize farmer in Isitsi village, Sabatia constituency, Vihiga.

When Andrew Edagwa looked at his 15-year-old son, then in form two, he didn’t see an A-material, but neither did he see a failure. “If you work hard and get a C+, then I may find you something to do,” he said quietly.

Benson was a day-scholar at Mbale High School, about 10km away. Getting to university was out of the question because the school, at that time, often took just one student to campus every year.

“But after my father’s words, I began getting serious with my studies. My mother also said I should just get some good grades. In form one and form two I wasn’t serious, but in form three, I started to study hard,” Benson says.

Luckily, the school abolished the day class and he started to board in form four.

Nearly 22 years later, Prof Benson Edagwa has become a highly sought-after researcher, the man who could give the world its first cure for HIV.

Two weeks ago, Nature Communications journal reported that Edagwa and a team of researchers have successfully eliminated HIV from humanized mice.

This is historic, being the first time scientists have eliminated HIV in an animal.

“I work on HIV with a passion because I’ve seen many Kenyans, including some close relatives, lose lives,” the don says.

I work on HIV with a passion because I’ve seen many Kenyans, including some close relatives, lose lives

HOW HE DID IT

The revolutionary approach — which he has patented — eliminates the need to take ARVs daily, reducing that to one injection a month, or once in six months, or even once a year.

When Laser Art is combined with a gene-editing technique known as CRISPR-Cas9, it can completely eliminate HIV from the body.

“Within a few weeks, the HIV is completely gone and there is no rebound,” Edagwa, 37, told the Star in Nairobi.

The combination was pioneered by Edagwa and his colleagues at the University of Nebraska Medical Centre, where he works as an assistant professor, in collaboration with researchers from Temple University.

If the trial is successful, it will bring a new form of HIV prevention to people.
Health
3 years ago

“These data provide proof-of-concept that permanent viral elimination is possible,” the authors say in an abstract published in Nature on July 2.

The researchers are already testing the therapy in non-human primates and hoping to confirm the same results. If successful, this would open the door for human testing.

The discovery is close to a cure because the mice were humanised and were infected with real HIV, unlike other studies that use monkeys infected with SIV (an HIV-like virus that infects monkeys and apes). Humanised mice are engineered to produce human T-cells susceptible to HIV.

While Laser Art alone cannot rid the infected host of latent HIV, it makes drugs more effective and keeps them in the body longer.

Medicines used to treat all other chronic conditions like TB and leukaemia can also be modified using Laser Art technology to linger in the body longer, eliminating the need for daily doses.

“One of our research goals is to translate existing antiretroviral drugs (ARVs) into long-acting compounds,” Edagwa says.

To completely eliminate HIV in mice in the recent discovery, Edagwa and his team first put them on Laser Art for weeks.

Current ARVs cannot eliminate the virus entirely but they suppress its replication. This is because the drugs cannot reach viral reservoirs, such as the lymph nodes and the central nervous system, where HIV hides.

But if they are modified with Laser Art, they can overcome this obstacle, and reach those reservoirs.

Edagwa’s team modified an ARV to reach the spleen, bone marrow and brain, where HIV might be hiding.

After several weeks, they used the gene-editing tool to cut out the DNA fragments where HIV was still clinging.

“The Crispr solution is given as an injection into a vein,” he told the Star. “Laser Art helps the Crispr to identify the proviral sections of the DNA and cut it out, meaning the virus has nowhere to attach.”

WHY CURE WILL TAKE TIME

Although proof of concept has been established, this treatment is years away.

“We have to establish several things because we’d need to come up with something universal. We would also need tests on people, and all these take long,” Prof Edagwa says.

Five weeks after a single injection of the Crispr-Cas9 treatment and eight weeks after the last Laser Art administration, HIV could not be detected in blood and all body organs using sensitive detection tools.

This provides hope to more than 37 million people — including 1.5 million Kenyans — living with HIV across the world.

However, although proof of concept has been established, this treatment is years away.

“We have to establish several things because we’d need to come up with something universal. We would also need tests on people, and all these take long,” he says.

A growing number of HIV-positive Kenyans have managed to suppress the virus to undetectable levels using antiretroviral drugs.Acting medical ...
News
5 years ago

In total, Edagwa holds 13 drug discovery patents in the US. “They broadly cover HIV and Hepatitis B. Some cover conditions such as Ebola and Zika,” he says.

He remains extremely hopeful of a drug he is working on to treat Hepatitis B, an infection of the liver. 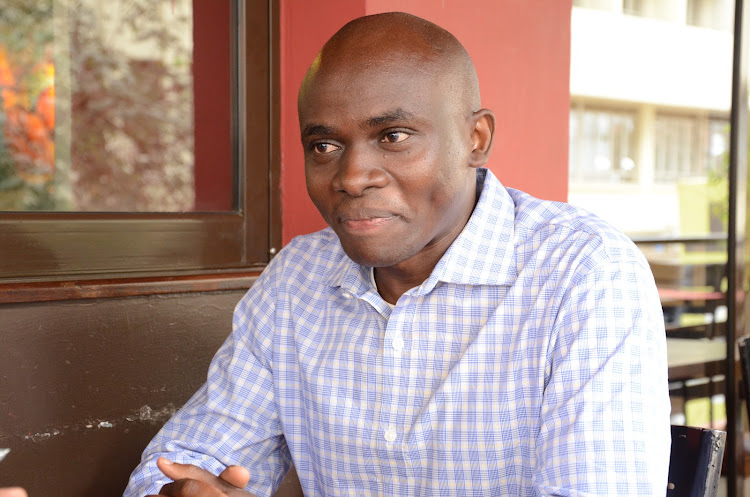 Prof Benson Edagwa: “Everyone is smart. Everyone has something to give to the society. If you can’t discover your talents, align with people to help you discover.”
Image: DOUGLAS OKIDDY

He completed his PhD at the Louisiana State University in 2012 and accepted a position at the University of Nebraska Medical Centre the same year.

“Looking back when I passed my KCSE in 1999, I wanted to study law but my mother said most attorneys are not very honest, so I decided to study science,” he says.

His mother Eunice was then a primary school teacher at Elongo Primary School in Vihiga.

“My father also discouraged me from applying to the University of Nairobi. He thought I would not graduate in time, and that’s how I was admitted to Moi University’s Chepkoilel Campus (now University of Eldoret) for a BSc in Chemistry,” he said.

Edagwa completed his undergraduate studies at Moi University in 2005 and, being among the top performers, was allowed to enroll into a Master's programme for four months prior to graduation.

“I really enjoyed chemistry in college, but I didn’t know what I wanted to become until Dr Samuel Lutta came and prodded me to apply for graduate scholarships abroad. But still, I didn’t want to study outside Kenya. I wanted to finish my Master's and look for a job,” he says.

He even politely declined Dr Lutta’s offer to pay Sh20,000 fee for his graduate record exam, a standardised test that is an admissions requirement for most graduate schools in the United States.

“I refused because I felt I may not pass the test. Anyway, I hustled and paid for the exam. I did not prepare, though I did well in maths but not in English. LSU admitted me anyway and I began my combined Masters and PhD there in August 2006,” he says.

My journey with HIV

Woman tells touching story of living with HIV for 18 years Ruth Waryaro was 50 in 2003 when she discovered she had contracted HIV and Aids. In spite ...
Sasa
7 years ago

Medicinal chemistry entails the creation of new compounds. "It’s a drugs discovery area. You try to make new molecules and test them against certain diseases and see if they work,” he says.

Edagwa is also the lead medicinal and formulation chemist on efforts to make better treatments against HIV and other chronic infections at the University of Nebraska Medical Centre.

He says working in a laboratory entails taking long shifts that extend late into the night, but his wife, Dr Teresa Mutahi, understands and is extremely supportive. She lectures at the University of Florida, and the couple has two boys aged seven and four years.

Edagwa still wishes to return home and build research capacity in Kenya. He wishes the government would pour more resources into research.

“We have many people here doing interesting research and we can work together. With more investments also, our youths will get jobs,” he says.

“I get a lot of emails from students and many are very smart, but not everyone gets an opportunity to go abroad, so we need to build capacity here.”

He advises Kenyan scientists to engage lawyers to protect their ideas.

“They can also reach out, we can collaborate with them. Many times people think if you’re not a foreigner then you’re not good enough, but this is a bad way of thinking,” he says.

Whenever he visits Kenya, Edagwa always gives talks to secondary school students, particularly in day schools. “I was a day scholar at Mbale. I was not considered an A-student, so I understand them,” he says.

“Everyone is smart. Everyone has something to give to the society. If you can’t discover your talents, align with people that may help you discover them.”