Since it took hold in Homa Bay, fish caging has saved vulnerable groups from sexual exploitation, while giving customers quality fish at a better price. HIV prevalence has drastically reduced from 26 to 20.7%

• Tilapia was dwindling due to encroachment of breeding areas, overfishing and use of illegal fishing gears.

• Caging by Victory Farms in Roo village has increased its population and helped women get supplies without selling themselves. 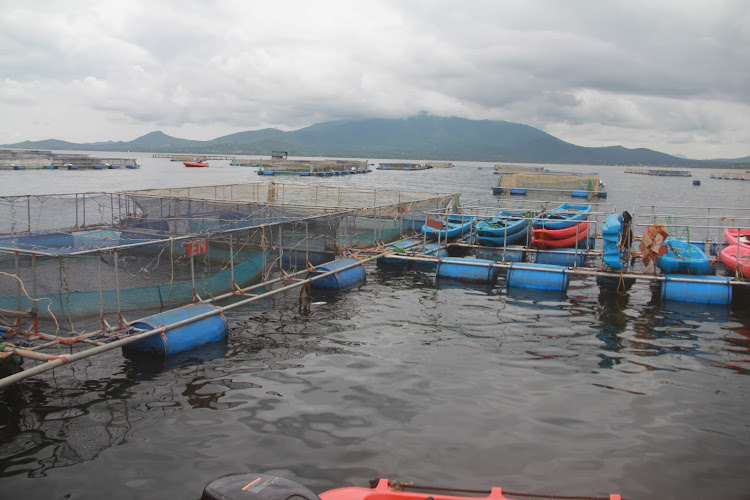 Some of the fish cages in Lake Victoria owned by the Victory Farms
Image: HABIL ONYANGO

The sex-for-fish trade, locally known as jaboya, has long been one of the main factors in the spread of HIV among the fisherfolk in Homa Bay.

However, fish caging is ending dependence on Lake Victoria and the men who run the show. This not only saves vulnerable groups from sexual exploitation but also gives customers quality fish at a better price.

According to the National Aids Control Council 2018 report, HIV prevalence has drastically reduced from 26 to 20.7 per cent in the county.

Most fishmongers, especially women, in the past engaged in unprotected sex with fishermen to get enough supply for their business. Widows and single mothers are the hardest hit, as they don't have husbands to fish for them.

Magdalina Atipa, 37, from Roo village, Suba South constituency, found herself facing this dilemma 10 years ago. Her husband, who was the breadwinner, died when she was only 27, leaving her with four children to fend for.

Left in a grass-thatched house with only an acre, Atipa resorted to manual jobs to support her family.

“I was forced to engage in weeding farms for other farmers, where I could sometimes get as little as Sh50,” she said.

“During school holidays, my children would sometimes help in engaging in some activities, which increased our daily income."

With a heavy burden to bear, Atipa was forced to sell half the acre she was left with to pay debts she had incurred and school fees for her eldest son, who was joining college.

“The rest I used to start a small business in our local shopping centre," she said.

With a capital of Sh4,000, the widow started a fish business, where she could get tilapia, a lakeside delicacy, and supply it to consumers at Sindo trading centre.

“Being new in the business, it was not an easy task, since the fishmongers had their own fishermen who used to supply them with the commodity through jaboya,” she said.

“Those fishmongers whose husbands go fishing have an advantage over those whose husbands are either dead or have left them. Fishermen demand for sex before supplying them, and many demand it without protection.”

Customers have now moved from fishing directly from the lake and are now more interested in the caged fish due to its quality, taste and even the price

Being a staunch Christian, Atipa refused to give in to the fishermen's demands. She decided, even though at a higher cost, to purchase from the women who had enough supply and sell door-to-door at Sindo market.

“I used to board a boda boda from Roo up to Sindo, where I could sell tilapia in residential houses and even local hotels," she said.

“With time, I got more customers. At the end of the day, I could even get a profit of around Sh2,000, enabling me to cater to my family."

In 2016, the life of the widow changed drastically, when she came across Victory Farms in Roo. The farm is involved in breeding, processing and selling of fish.

After three years working and supplying fish bred there, Atipa earned enough to support her children and build a two-bedroom iron sheet house.

Despite working at the factory, Atipa owns a larger fish depot at Sindo main market, where the local sellers get the supply from.

“Things have actually changed in the last three years. The fishermen I used to purchase fish from have now turned into my customers,” a joyful Atipa said.

“Customers have now moved from fishing directly from the lake and are now more interested in the caged fish due to its quality, taste and even the price.”

Apart from Atipa, many other residents have benefited from the factory, especially the women who used to engage in jaboya and illicit brew business. Currently, more than 500 persons from Roo area are employed by the factory.

Jane Agolla, a resident of Mikiundu village in Roo, said the construction of the factory is a blessing to the community, and especially the women and the youths who could not go fishing.

“This region was a chang’aa den, which was being brewed by women around who could only make a living by selling it to our youths and fishermen, which ruined many people's families," she said.

Agolla, who is in charge of the processing department, said women can now easily access tilapia following the increase of fish supply in the lakeside city.

“Our youths who used to throng local drinking den due to lack of employment. Those who could not secure jobs in major cities can now have something to keep them busy locally,” she said.

“Our women can now easily walk to and from their working stations. Widows can now afford to pay school fees for their children and even construct new houses. The working environment is also favourable.”

Duncan Omondi, a supervisor in the nets and cages department, said the factory has really changed the lives of many. In the past, he used to depend on farming, which did not do well along the lake, and he could not meet his family's needs.

The father of five, who also takes care of three orphans left behind by his late brother, said since he got employed at the factory three years ago, he has been able to support his family.

However, not all is rosy. Some fishermen have in the past held a protest, citing lack of consultation and encroachment of the cages, blocking transport and fishing routes.

Community relationship manager Philip MakAbiero says there has never been such a conflict between the farm and the fishermen.

He said the perceived differences are incited by politicians who depend on hearsay and have never stepped into the farm or engaged the management or the Beach Management Units to get the truth.

“Before we initiated the project, we carried out public participation, which involved the beach management units, landowners, the county government, Nema, youth leadership and Fisheries ministry, who gave us the go-ahead to begin the construction process,” MakAbiero said.

“Our cages are placed as per the agreement by all the concerned parties, including the county government, and we have never interfered with any activity by the fishermen.”

In fact, the manager said, since they began the fish caging, the population of wild fish around the region has vastly increased. Previously it was suppressed due to encroachment of breeding areas, overfishing and use of illegal fishing gears.

“Some of our cages, which one can carry up to 20,000 fingerlings, may be destroyed by big Nile perch species, which actually escape into the lake, thereby increasing the fish population,” the manager said.

“Tilapia was almost becoming extinct in this area, and the fishermen could only catch Nile perch. At least for the last three years, they are able to get the species in large numbers and they are allowed to carry their fishing expeditions without any interference around the cages, as long they do not interfere with them and don't use dangerous chemicals to fish."

MakAbiero said the factory has also reduced the sex-for-fish trade.

“We have not blocked any transportation route for the boats. The passenger engines freely use the lake as you can see,” he said, pointing at one of the passenger boats on its way to Roo landing site.

He appealed to leaders who have been hearing various rumours and the locals to visit the farm for themselves before castigating the management.

To support local sellers and consumers, the management has set up depots in Sindo, Homa Bay and Mbita, where fishmongers can easily access the delicacy.

Duncan Ochieng, a tilapia consumer at Sindo market, said the resistance may have been caused by the increase in tilapia supply from Victory Farms.

“Tilapia was so scarce in our markets, thus increasing its demand and prices. Most of the consumers were forced to buy Nile perch. But since the factory started its business, consumers can easily access tilapia at a lower cost, a matter which has upset the fishermen."

“The people of Sindo are not fools to come out to demonstrate. We cannot have stationing, portioning and allocation of the lake without guidance and regulations

Homa Bay Senator Moses Kajwang faulted the factory management for not carrying out proper public publication before they began their activities.

“The people of Sindo are not fools to come out to demonstrate. Things are not being done correctly in the lake,” Kajwang said.

“We cannot have stationing, portioning and allocation of the lake. There must be guidance and regulations to guide the process."

The issue has been forwarded to the county security team, led by county commissioner Irungu Macharia.

According to documents seen by the Star, the gactory got approval from the National Lands Commission under the Homa Bay Land Management Board. It signed an agreement with the county government and Nema, which even issued them with a certificate on May 5, 2016.

The Fisheries ministry issued them with authority to undertake tilapia cage culture and fingerling production in Roo bay, Gingo nurseries and production units in Lake Victoria.

“Our commitment to protecting the lake is core to our business,” he said.

Farmers in Bondo, Siaya county, are embracing fish cage farming.Fish caging is a method where fingerlings are stocked and caged within the lake away ...
Sasa
7 years ago
Post a comment
WATCH: The latest videos from the Star
by By HABIL ONYANGO HOnyango07
Big Read
28 June 2019 - 06:00
Read The E-Paper